Project StepOne began as a volunteer effort to boost government resources when Covid-19 first began in 2020. It relies heavily on the power of the cloud and AWS to scale its efforts as it helped citizens connect with doctors As Omicron grows in India, Project StepOne is gearing up for its volunteer efforts once again. In this photo, hospital staff continue with their routine work at the isolation ward prepared for Omicron variant Covid patients at Civil hospital, Asarwa on Tuesday. (Express photo by Nirmal Harindran, Ahmedabad)

With the Omicron challenge still evolving, Project StepOne has restarted engagements with the government and alerting volunteers to be on standby. In March 2020, when the Covid-19 pandemic was still in its early stages in India, this volunteer organisation had leveraged the latest tech solutions and power of the cloud to plug in gaps in India’s health infrastructure.

Project StepOne had come about after a group of tech evangelists started brainstorming how they could use technology to help citizens if the pandemic were to have the brutal impact that was predicted. Project StepOne, which views itself as an extension of the existing government
efforts and now handles the state helplines across 21 states and union territories in the country.

“We basically work to provide Covid-19 consulting or telemedicine facility on the existing state government helplines,” Raghavendra Prasad T S, who helped co-found the efforts, explained to indianexpress.com. Now, the focus has started shifting to Omicron: “We have already boosted our internal infrastructure to scale faster and more smoothly if there were to be another big wave.”

When they first went live in Karnataka in March 2020, they received 30,000 calls on Day One itself. And in some states, such as Delhi, which had a specific Covid-19 helpline, the number was run by a team of volunteers from StepOne.

Subscriber Only Stories
View All
Scintillating sea creatures and what makes them special
Union Budget 2023: How the government calculates the math
Focus on border areas, NCC plans to raise cadet strength by 8 lakh
With access as key, an MP district brings govt home to beneficiaries
Monthly plan to access Budget
Read more |Explained: What are the symptoms of Omicron?

“We worked with the government where we would, on a real-time basis, get the list of people who were positive. We would proactively call them, introduce ourselves, as you know, calling on behalf of the government and based on their symptoms and home conditions give them medical advice as well as advice on whether they should continue at home or if they go to a hospital or a Covid-care centre,” Prasad said.

The volunteers include over 10,000 doctors, 15,000 medical students, and over 5,000 non-medical corporate volunteers. The latter were trained on specifically triaging of Covid-19 cases. The idea here was that the volunteers would try to minimise the number of cases which the doctor has to attend, given not all cases required a clinical decision to be taken.

Prasad compares it to something like Uber, except here they are connecting citizens to volunteers. But building this kind of volunteer effort for a country such as India, where the sheer volume of calls was averaging more than 300,000 during the peak of the second wave in April-May 2021, meant relying on the most scalable tech solutions.

And that’s where Amazon Web Services (AWS) and its scale proved to be a game-changer. “We had to build specific processes around our technology that manages the workflow because there’s a large number of people. Most of it was built in-house, but we also had technology that we sourced from outside existing open source technology, and all of that was hosted on AWS,” Prasad explained.

During the second wave, Project StepOne was helping around 162,000 patients daily in April, a number that almost doubled to 310,000 the very next month. And since Project StepOne was augmenting government resources, they also had to give proper data back to the government, which made the challenge doubly harder. For example, the data had to look at the number of infections, those at low risk, those at high risk, or medium risk. 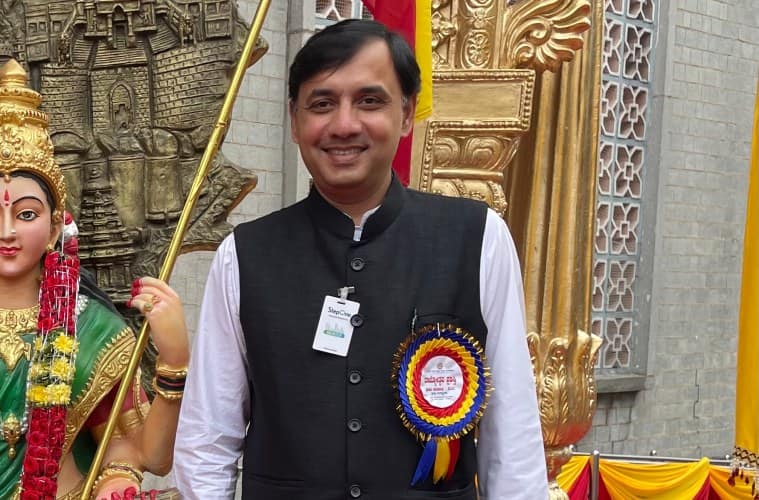 “Initially we were doing all of that manually and we knew that was not scalable. So we requested AWS to help out and they assigned a few solution architects. Plus we also had a stellar team of architects from various startups, who have experience building extremely scalable solutions that work for millions of users,” he said.

What also helped was AWS giving the volunteer effort free credits, making their services practically free for several months. They also used services such as Amazon QuickSight, which can allow an organisation’s members to understand their data better, view it in interactive dashboards, and look for patterns, powered by machine learning.

And given the devastation that the second wave caused, Project StepOne had to do a lot more in cases where a death was involved. “For example, in some states, we were trying to identify if any children were orphaned in the process because they need to get special attention. So another work process would get triggered again through the AWS. Similarly, we also had grief counselling for people whose family members died. So that workflow would also get triggered, and we had to keep getting all of this and sending that back to the government. All of that was orchestrated and built within AWS,” Prasad explained.

But the second wave also pushed the volunteer efforts to their limits. “We had bottlenecks at every end. We did hit limits on telephony and we had to increase the number of lines. Every possible limit could be breached during the second wave,” Prasad explained.

The challenge though in his view was not the tech, which could be fixed quickly. The biggest issue is still finding doctors, medical students who can volunteer and help out because, in the end, that’s what was really needed when the cases peaked as they did during the second wave of Covid-19.