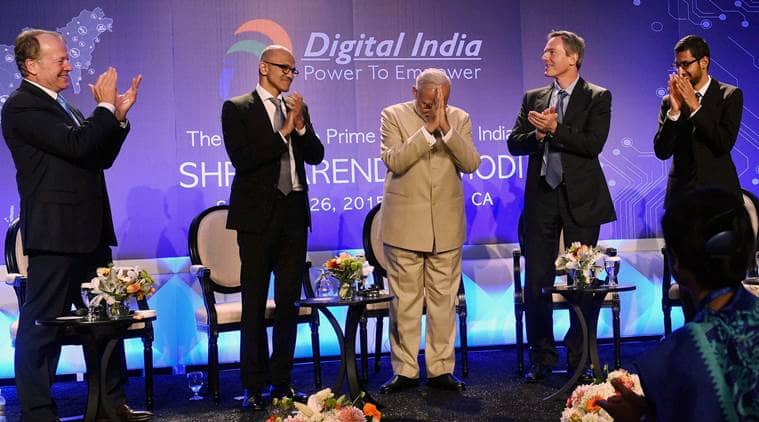 In his first major official engagement on the West Coast, on the second leg of his US trip, Prime Minister Narendra Modi told CEOs of tech majors in Silicon Valley that the Digital India initiative was an “enterprise for transformation… unmatched in human history”.

The Prime Minister also announced a plan to expand WiFi coverage across 500 railway stations in India, in collaboration with Google. There were separate announcements of a $150-million fund from Qualcomm to foster start-ups and cloud services by Microsoft, and a suggestion to Apple on manufacturing in India.

“Digital India is an enterprise for the transformation of India in a scale unmatched in human history. Nothing else will do in a country with 800 million impatient youths waiting for change,” Modi told business heads in San Jose.

He added that the India-US partnership was one of the defining partnerships of the time, one that converges in California. “California might be among the last places on the globe to see the sun set, but it is here that many great ideas see the first light of the day,” Modi said to thunderous applause on Saturday night.

In an address doused with humour, and acknowledging the main players of social media who draw their lifeblood from Silicon Valley, the PM touched on a range of subjects, from green energy to the Internet of Things.

“Facebook, Instagram and Twitter are the new neighbourhoods of the world. Facebook would be the world’s third most populous country, maybe the most connected of all,” he said, speaking in English as hundreds of smartphones recorded every word and others livestreamed or tweeted.

Sundar Pichai of Google, Satya Nadella of Microsoft, John Chambers of Cisco and Shantanu Narayan of Adobe flanked the Prime Minister on the stage. Below, the ballroom of Fairmont Hotel was packed with top executives of Silicon Valley companies.

Opening the event, Narayan said India’s embrace of technology has changed its destiny and is competing in the world with its greatest asset, its people.

Chambers said Modi’s vision of a Digital India will succeed as he had the courage and conviction to bring in change.

Nadella said Microsoft is all set to announce availability of cloud services operated out of India. “Now is the time for all of us to come together to empower people around the world,” he said.

Qualcomm’s Jacobs said the affordable smartphone revolution could end up with 250 million units being sold in 2020 and that would be an opportunity for all companies. “What is interesting is that over 60 per cent of Internet in India is now on mobile,” he said, adding that the country was poised to be a leader in technology.

PM Modi giving his speech at his meeting with the top tech CEOs.

Jacobs also announced $150-million fund to foster Indian start-ups and a Design In India initiative to create a local ecosystem for product design.

Pichai said Modi has driven India’s effort to become the next hotbed of innovation. “It is not just about being online, but what you do online,” he said, citing the case of Nisha Madhulika who creates YouTube videos of vegetarian recipes.

Earlier on Saturday, Modi visited the Tesla plant where he was shown around by CEO and Founder Elon Musk. The visit highlights India’s interest in the company’s solar Powerwall technology. Later, the Prime Minister met with Apple CEO Tim Cook. Modi urged Cook to look at manufacturing in India, especially since Apple’s manufacturing partner Foxconn had already set up base in India.

The Indian Ambassador to the US Arun Singh said the Apple CEO was “positive” about this, though he appeared more keen on the developing the app ecosystem for iOS out of India thanks to its design base.

Modi and Cook also discussed the scope of Apple Pay in initiatives like the Jan Dhan Yojana to ensure banking services for all.

(The writer is in Menlo Park on the invitation of Facebook)