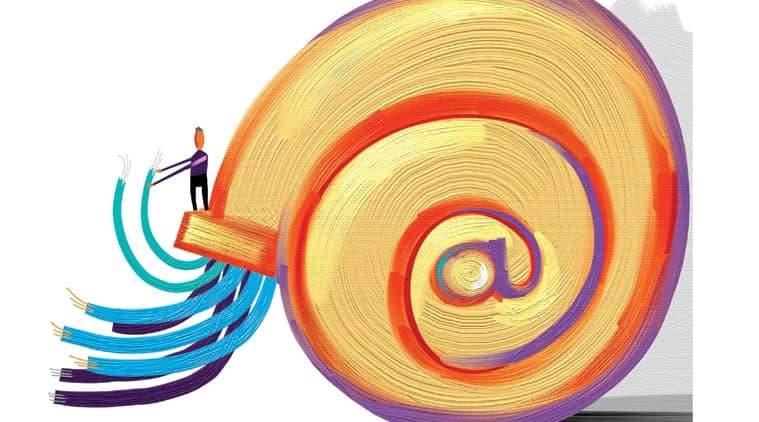 The project, once complete, will enable the Centre to provide e-services and e-applications nationally and a minimum of 100 Mbps bandwidth is to be made available at each GP with non-discriminatory access to the network for all categories of service providers. (Illustration : C R Sasikumar)

The Department of Telecommunications (DoT) has come down hard on RailTel for slow progress of work relating to the National Optical Fibre Network (NOFN) project, which it said holds high importance for Prime Minister Narendra Modi.

“I do not need to over-emphasise the importance given to the programme by the PM. If the matter continues in this manner without any perceptible improvement in the progress as suggested above, the matter may be viewed seriously by the PM,” said the letter written by N Sivasailam, additional secretary, DoT.

While the government’s flagship NOFN project targeted to provide broadband connectivity to 1 lakh gram panchayats (GPs) by March 2016, it has now been deferred to December 2016. Minister of Communications and IT Ravi Shankar Prasad, however, told The Indian Express that the ministry is pushing for it and “the target would be met by the end of the year.”

But problems continue and there still seems to be question marks over the state-run executing agencies — Bharat Sanchar Nigam Ltd (BSNL), RailTel and Power Grid Corporation of India Limited (PGCIL) — meeting the deadline of December 2016.

Prasad said that the current government has made a big progress and has achieved much more than what was achieved by the UPA government. He said that as against 358 kms of OFC laid till June 2014, as on March 14, 2016 the optical fibre pipe has been laid in 53,584 GPs and the cable was laid in 42,892 GPs. But this still leaves around 57,000 GPs where OFC is still to be laid in less than 10 months for meeting the target of 1 lakh GPs.

While NOFN was planned in 2011 to connect all GPs through OFC and BSNL, RailTel and PGCIL were entrusted with the task of laying incremental fibre, the companies are running way behind their targets.

Earlier this month, Prasad had blamed limited resource deployment by institutions as one of the key factors for not being able to meet the March 2016, timeline of NOFN project. In a written response in the Rajya Sabha, the minister said, “Considering the vastness of project execution, the very limited resources deployed by institutions, coordination with multiple agencies, time required for tendering, mobilisation of physical resources and the budgeted resources, the timeline for completion of NOFN project could not be met.”

It is also important to note that even in Gujarat, which is the Prime Minister’s state and where BJP has been in power, the completion of project is way off the mark. While RailTel had been entrusted laying OFCs in the 5,735 GPs, as on March 7, 2016, the OFC laying was completed only in 1,859 GPs.

However, this is not the first time that the ministry has written to the organisation about the slow progress of work on the project. In February 2015, Prasad had written to railway minister Suresh Prabhu raising concern over the slow progress made by RailTel and asking him to review at his level. “I am writing this letter to share with you my serious concern over the lack of progress by RailTel in this important project. While RailTel was to have laid about 22,788 km of optical fibre cable before March 2015, I understand that the achievement so far is only 550 km; which amounts to roughly 2 per cent of the target. Consequently, as against the target of 8,106 GPs to be covered by RailTel by March 2015, only 260 GPs have been completed so far,” Prasad had written to Prabhu in a letter dated February 10, 2015.

A few days later, on February 27, 2015, Aruna Sundararajan, the then administrator, Ministry of Communications and IT wrote a letter to RK Bahuguna, CMD, RailTel, expressing concern over the progress made by the company. She went on to say in the letter that “The casual approach and disregard displayed by the top management and the officer s handling the project in RailTel is indeed regrettable.”

Initiated in 2011 the project was to be funded by Universal Service Obligation Fund with the aim of providing broadband connectivity to over 2 lakh GPs. It aimed to leverage the existing fibre optical network of Central utilities — BSNL, RailTel and PGCIL— and laying incremental fibre wherever necessary to bridge the connectivity gap between panchayats and blocks. BBNL was created as a public sector undertaking for its execution. While RailTel was allotted 8 states and 3 Union Territories, the company has shown progress in Tripura, Puducherry and Gujarat in terms of some connected GPs. There has been no progress in the remaining 6 states and 2 UTs.

The project, once complete, will enable the Centre to provide e-services and e-applications nationally and a minimum of 100 Mbps bandwidth is to be made available at each GP with non-discriminatory access to the network for all categories of service providers.

Delhi to stay up all night: Restaurants and bars can now apply to run 24/7