‘We want to give choice… target all types of users’: Microsoft India Surface head

In an interview with Indianexpress.com, Amrita Sapre, Country Head – Devices (Surface), Microsoft India, talks about the company's vision to tap into a diverse customer base with its high-end Surface products. 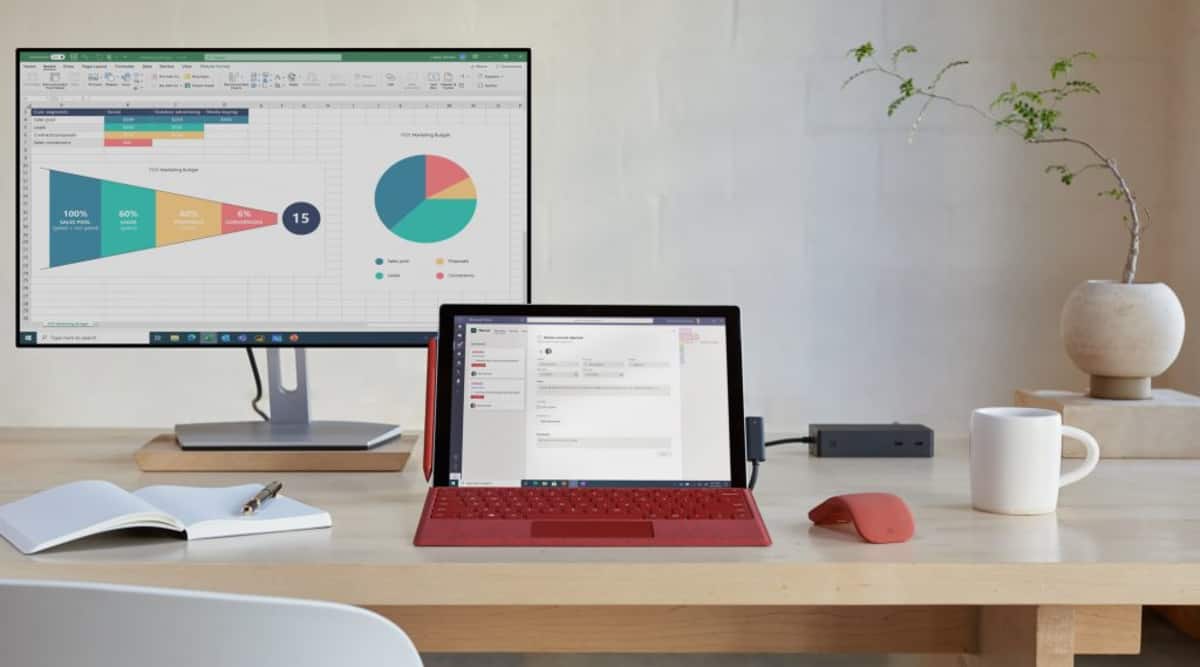 The Surface Pro 7+ is a refreshed Surface Pro aimed at businesses and education. (Image credit: Microsoft)

“What we’ve been able to do is create this new group of users who want to be differentiated by the different form factors that Surface is bringing to the table,” Amrita Sapre, Country Head for Surface devices at Microsoft India, gives a candid reply when asked her about growing competition from Apple in the premium PC market.

While Sapre does see Apple as a competitor to Microsoft’s Surface lineup, she also believes the larger aim is not to compete with “Apple” but to give its customers different experiences and different devices. “Are we going after the same users? The answer would be yes or no,” she tells Indianexpress.com in a video interview. “There will be some Mac users who will move on to Surface because they are finding security better, or they’re finding application development better on Windows devices,” she counters.

Microsoft positions its Surface range as upmarket computing devices with a clear focus on industrial design and premium pricing. The full control Microsoft has over its Surface products reminds of how Apple controls the design, hardware and software of its devices. That approach is working for Microsoft, although revenue from its Surface hardware portfolio is still small compared to the company’s other business verticals.

But the Redmond, Washington tech giant has been diversifying its product portfolio with an aim to cater to a broad set of users — both on the commercial and consumer side. The launch of the Surface Pro 7+ and Surface Hub 2s in India this week is seen as Microsoft’s new approach to offer solutions that are primed towards business users. The 2-in-1 Surface Pro 7+ includes the ability to remove an SSD drive, meaning enterprise customers can easily swap out the drive for repairability or upgrades. Meanwhile, the Surface Hub 2S is a giant 85-inch touchscreen interactive whiteboard that allows workers to interact without being physically present in the same room.

Sapre thinks it is easier to choose a Surface product, because there is a clear distinction between consumer and commercial SKUs. “We cater and target all kinds of target audiences, right from a student to a CXO who might be using a Surface Hub 2s at home office or a conference room,” she explains. “We don’t want to limit the portfolio, we want to give the choice.” Microsoft’s Surface range may have gained traction in the US and other popular markets, but India remains relatively a new demography where the Surface brand isn’t strong. This raises a fundamental question. What is Microsoft doing to increase the demand for its premium Surface devices in India? Sapre says the growth for Surface devices has “more than doubled” and the demand is coming from across verticals. The enterprise segment seems to be the biggest driver for the growth, however. Sapra reveals that the company recently closed a “large” deal with a leading bank that purchased Surface Pro devices for their frontline workers. She also counts AirAsia India as a big client that uses Surface devices for crew and pilots.

Sapre says she doesn’t see the market share as an important parameter to gauge the success of the brand in a particular market. “It’s really about a new kind of device experience for the customer and expanding the ecosystem, then looking very narrowly in terms of just market share,” she says, adding that “there is enough and more for everybody.”

As Microsoft becomes more aggressive with its Surface products, Sapre says consumers will start seeing change. The first thing Sapre is doing is to reduce the launch time between the products available in the US and India.
Previously, it took Microsoft six to eight months to launch a new Surface product in India and that gap has reduced to two weeks in the case of the Surface Pro 7+. Microsoft is yet to introduce the dual-screen Surface Duo and Surface Headphone in India and Sapre says no decision has been taken on bringing those devices here.

One scepticism that Microsoft particularly faces in India is the hefty price tags of its Surface products. Although Surface devices have never been cheap, they are priced even higher when it reaches India. “There is no India cost added to the device,” Sapre clarifies. “The base price across the country where Surface products are available would be very similar. The challenge happens because of tax structures, in case there is an import duty, and the freight and those kinds of things,” she adds. Microsoft has diversified its portfolio in recent months, a move that might help the company to reach out to more consumers who are ready to pay a premium for its devices. (Image credit: Microsoft)

On the increasing competition for the Surface devices from Microsoft’s own OEMs like Dell and Lenovo, Sapre says: “It’s unfair to put the OEM partners at war with each other…we understand everyone brings to the table a unique differentiation, a unique value proposition, and it is the customer’s choice, what they want to choose at that particular time.”

Instead of competing with the OEM partners, Sapre says the goal is to expand the market to create a new ecosystem of devices. “If you’re looking at a very price-sensitive market, then you have all kinds of devices from our OEMs, right from Acer to HP, Dell, Lenovo,” she says. “But if a customer is looking for a differentiated experience, right from a manageability, security, or the way they are experiencing the device, then they might look at a Surface ecosystem. It’s not about competing, it’s about giving them benchmark devices.”

Microsoft is taking a certain direction with the Surface range — how it designs and markets its devices. And the company has been successful at marketing the Surface brand among aspirational consumers. But at the end of the day, Microsoft is a part of the Windows ecosystem and any shift in the industry will impact the company and its OEM partners. For example, Apple’s recent jump to its own M1 silicon for the Macs and dumping Intel is seen as the beginning of a new era in the PC industry.

Microsoft Surface Go 2 review: A capable 2-in-1 PC, but at a price

Sapre says she can’t comment on behalf of Intel, but stresses that whosoever comes up with a new idea that can be executed is good for the industry. “Whether it’s Apple coming with the M1, or we working with Qualcomm and bringing out a new device, the idea is it keeps the ecosystem energised.” She adds: “Intel has been a strong partner of ours and end customers have faith and confidence in the security that we provide with the windows. It’s pretty much safe to say that the combination is going to stay, but we will keep on experimenting.”

There are signs that Microsoft too could be moving away from Intel’s processors used in its high-end Surface products, though Sapre says the company is still committed to Intel. In 2019, the AMD-based Surface Laptop 3 was announced with the new, co-engineered Ryzen Surface Edition processor. And then came the ARM-powered Surface Pro X, a custom variant of Qualcomm’s Snapdragon 8cx chip. There have been reports of Microsoft developing its own ARM-based processors, though the company is yet to acknowledge those rumours.

Cuomo is accused of sexual harassment by a 2nd former aide