Intel launched its 13th generation of desktop processors in India today, a series that consists of 22 processors across segments, including the new i9-13900K. The launch comes weeks after AMD announced its new Ryzen 7000 series desktop processors which the Intel 13-Gen chips will go up against. Here’s all you need to know about the new Intel 13th-Gen ‘Raptor-Lake’ processors and what improvements they bring over last year’s 12th-Gen chips.

The lineup is led by the new Intel Core i9 13900K processor, which the company claims is the world’s fastest processor. The unit comprises 24 cores (eight performance cores plus 16 efficiency cores) and has 32 threads, with a peak clock speed of 5.8GHz. These cores are assisted with 36MB of L3 cache and 32MB of L2 cache. It also comes with Intel UHD Graphics 770 built-in, for systems which don’t have discrete GPUs installed.

Intel adds that the 13th Gen Intel Core desktop family comprises over 125 partner system designs, allowing for a wider range of platform compatibility. These include full tower desktops with liquid cooling as well as more conventional, smaller systems with reduced sizes, all of which should offer good performance.

Six of the 22 new processors are also unlocked, allowing advanced users to overclock them to squeeze out more performance when required. These include the aforementioned i9-13900K as well as more affordable options like the i5-13600KF. Check out quick specs of the lineup in the image below 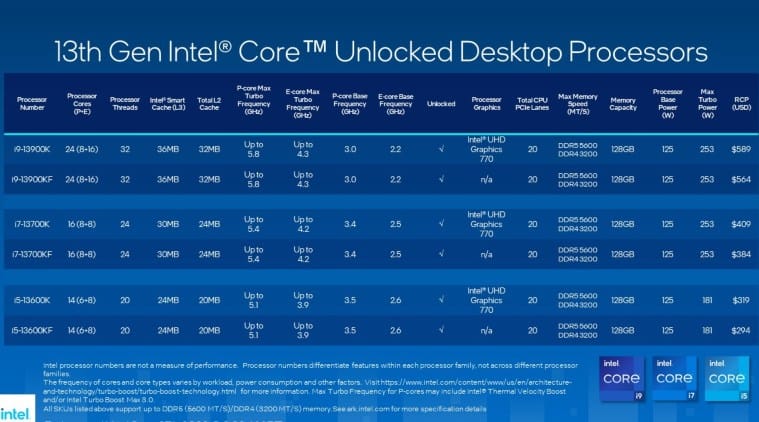 The lineup also includes the F-series processors which come without an integrated GPU and must be paired with a discrete one before it can be used.

The new CPUs also offer full PCIe 5.0 support and are compatible with existing Intel 600 or new Intel 700 series chipset motherboards. The chips also can be combined with both DDR4 and DDR5 memories, making them hybrid in terms of forward and backward compatibility. This is a big advantage compared to AMD’s new Ryzen 7000 series chipsets, which only support DDR5 memory and need a new AM5 slot motherboard upgrade to be used.

Intel is yet to announce the pricing for any of the chips launched today, but we should have official local pricing announced soon.

Mohanlal: It’s very rare for an actor to get to do a movie like Monster