Google I/O 2019 Keynote Highlights: The Pixel 3a phones are here

Google I/O Keynote 2019 India Highlights: Google’s I/O annual developer conference has started and this is an two-hour keynote. Google has made key announcements about its software products including the new next-generation Google Assistant, which is faster and can handle multi-tasking with ease. Google Duplex is also coming to the web. Further, Google is bringing the Camera to the search engine.

Google's AI will be used for flood alerts in India. The area will be expanded this year. Google says it is working with the govt to give updates around the floods.

Google showing how AI can be used to detect lung cancer

Google is now showing how its AI can be used to detect lung cancer early. According to Google, over 80 per cent cases are not diagnosed early. Google will be publishing a paper soon which can analys CT scans and predict lung malignancy. Google says its model can detect early signs, which radiologists might miss.

Google Pixel 3a, Pixel 3a XL

Yup they follow the design of the Pixel 3 phones. Except they have a plastic polycarbonate body. They come in Black, White and Purplish colour. Google is sticking with the OLED display on both the phones. They also come with a 3.5 mm headphone jack, which is not there on the Pixel 3 or Pixel 2.  Pixel 3a will come with the same premium camera as the original premium phones. The Night Sight mode, Super Res Zoom and Portrait mode will also be present on Pixel 3a phones. Google Pixel 3a and Pixel 3a XL are here

Finally, the Google Pixel 3a series is announced. We have seen so many leaks, and they are mostly accurate. Yes, the new Pixel 3a and Pixel 3a XL are supposed to be more affordable. 'Premium features', promises Google.  They are starting at $399 in the US. That's Rs 27,000. But let's wait for India price confirmation. Nest Hub Max has been announced, this has a bigger 10-inch display, and a camera. This has a homeview dashboard to see all cameras, thermostats, door locks, etc. The camera in the Hub Max can be used as a NestCam. It also supports video calling via Google Duo. Users will always know when the camera is as the green light will be on. There will also be physical controls to disable the microphone and camera. And Google is adding a Face Match feature to the Hub Max, which will rely on facial recognition. Google says the data does not leave the device. Google is bringing the Android Q beta to 21 devices this time. Google has partnered with over 12 OEMS this time. Android Q is finally getting a Dark Theme. That gets a lot of cheers from the audience. Once again Google is talking about privacy. Google also says the Live Captions feature will work entirely on the device, and will not even need the internet to create these.

In Android Q, all privacy settings will be in one place. In Location data, Android Q will let users choose from a number of options, including sharing location only for a limited time. Google in Android Q will also give reminders that an app is accessing location. 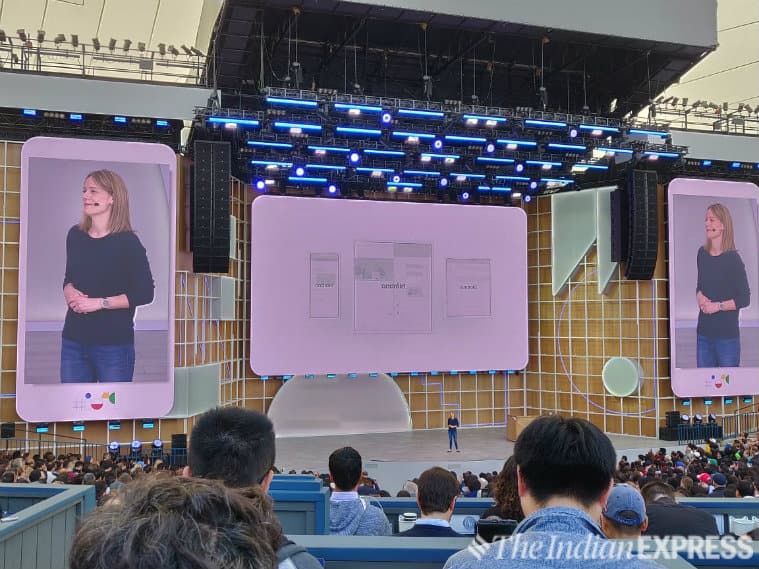 Google says the Live Captions can be done offline as well. All of these are done entirely on the device and one does not even need to be connected to the internet. These Live Caption for video can be done even in the airplane mode. Google insists this will be better for user privacy. Another feature on Androdi Q is Smart Reply where it will predict the text you will type. This will work for all messaging apps. It will be even predict the actions you will take, the Emoji you might want to send.

Android Q is now here. One it will support foldable displays. A new feature is screen continuity for these foldable phones on Android Q. And we here about 5G as well.  Android Q will support 5G natively. 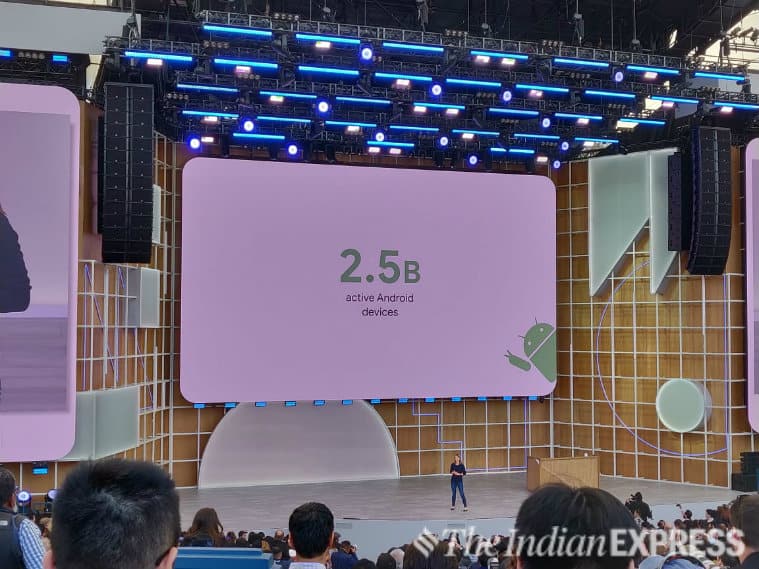 Google's Project Euphonia is for helping those who cannot speak and wants to give them their voice back. The idea here is to make the device understand those who cannot speak due to any health condition. For example, those who have ALS and have lost the ability to speak. Google is working on these voice recognition models, though the company says it will need more sample models in order to accelerate this effort.

Google is adding a new Live Captions feature, which can add captions to a Live Video. Pichai says this is only possible due to their breakthroughs in voice recognition technology. This is aimed at helping those who are hearing disabled and those who prefer not to speak. Pichai says they are also exploring how this technology can be used to help with calls. Voice calls could be live captioned with this feature. 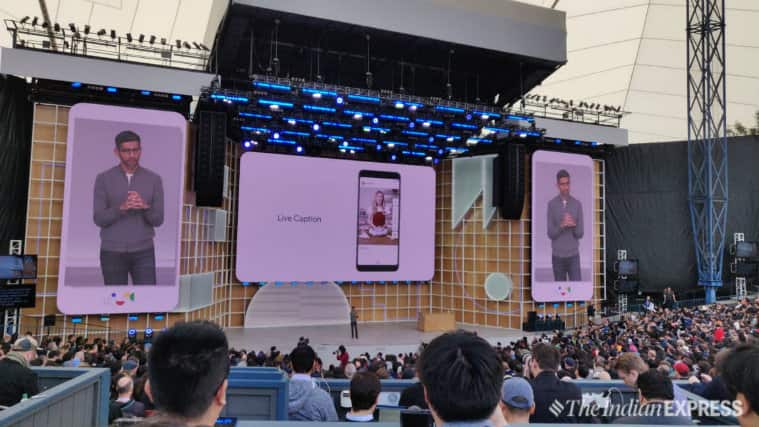 Pichai says users will be able to quickly able to access privacy controls from their account settings and easily change these. He also mentions the Auto Delete control, which was feature rolled out last week. It will let users ensure that their old data can be automatically deleted. Google says all data will be automatically deleted after 18 months. One tap search for privacy settings will come to all major Google products like Maps, News, Search, Assistant, YouTube. Also Google Maps is getting an Incognito mode, along with YouTube and Chrome. Google says it will bring Incognito mode to search as well this year. Sundar Pichai on need to reduce bias in ML models

Pichai says they are working on reducing bias in machine learning models. This has been one of the concerns of artificial intelligence. Pichai says Google researchers are working with a new methodology TCAV, which will help understand the classifiers used to train the model. For example a model designed to detect skin care will need to detect a lot more variety of skin tones in order to work accurately.

Google users will have the option of sharing some personal information with the Assistant and the new 'Picks for you' feature will be able to carry out tasks, give personalised suggestions based on these. Google says users will be able to delete this shared information at any time they feel like. There's also a new driving mode in Assistant. Driving Mode will come to Assistant soon. 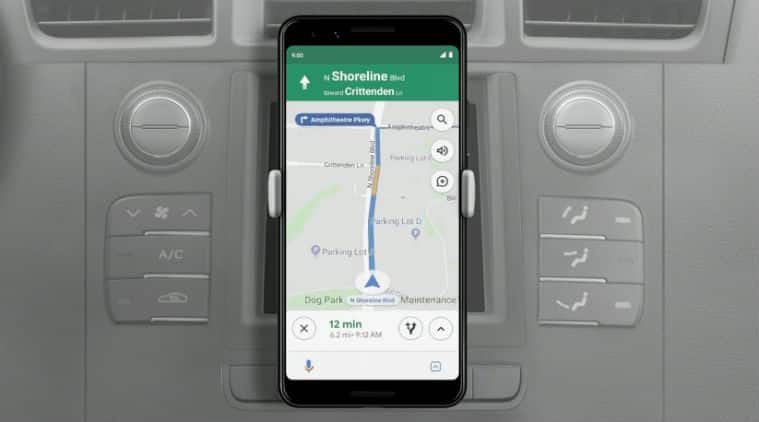 Google Assistant: The next-gen version is here and this one is a multi-tasker.

We are getting a demo for the new version of Google Assistant, which is supposed to be super fast and will answer a number of queries in real-time, without stopping. It's basically like a super-charged version of the Assistant. In the demo, they were able to make a number of requests in a row, without using the Hey Google keyword.  Google Assistant's next-gen version will be able to compose and send an email as well, which is a much more complex task. At least that's what Google is demoing for us.

It will come to the Pixel phones later this year. 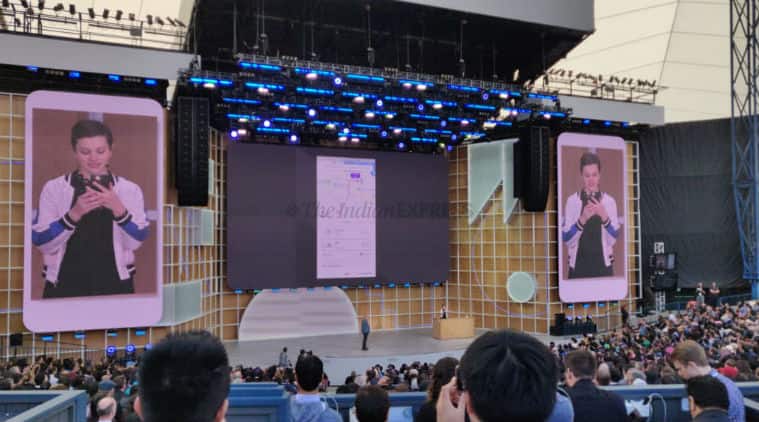 Google Duplex is coming to the web 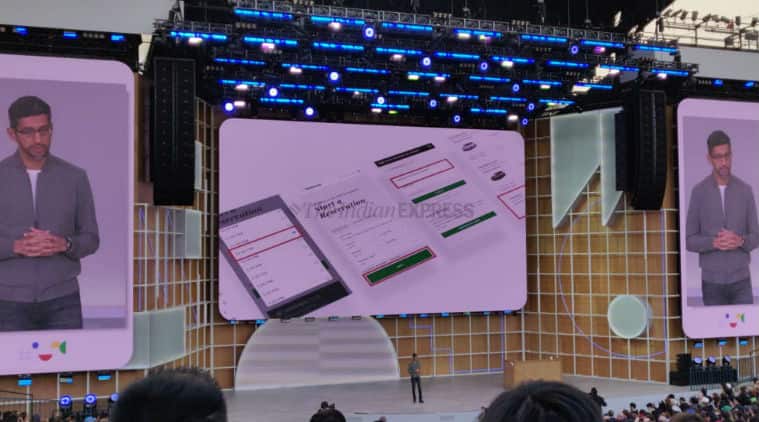 Google Duplex is moving to the web. Google says it will help with some limited tasks on the web. For example, if you get a calendar reminder, then you can just ask Google Assistant to complete a task online on your behalf. It will be able to confirm a car booking for the user based on the Gmail notification for the trip. Google is calling this an early preview for Duplex on the web. Pichai says Google will get more feedback as they roll it out. 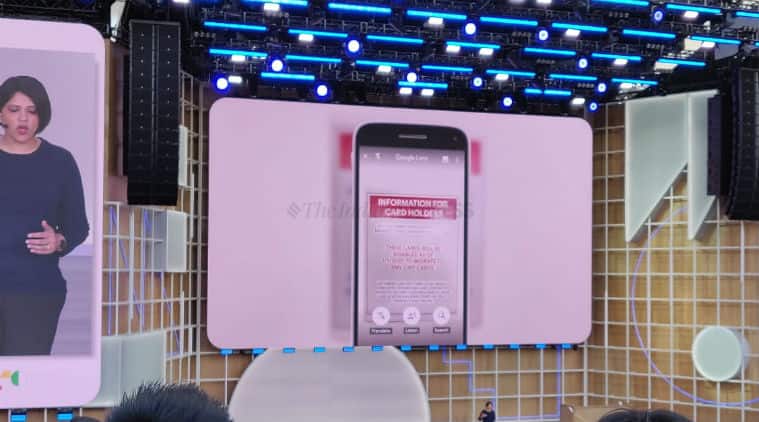 Google is showing how the camera feature can be used to read text. It already works in a dozen languages.  The tech is over a 100KB, explains Google and it will work on phones, which cost under $35 as well.

Google Lens is getting more features

For one, Google Lens when used in a restaurant will point out which dishes are popular, when you point the camera at the menu. And you can point the camera at the receipt to calculate the tip, and how to split the bill. Soon a user will be able to point the Google Lens camera at a recipe and they will see the dish come alive. Further Google Go is getting the camera app as well. This is Google's search app for entry level disable. Now on Google Go, users will be able to point the camera to a text, and it will speak out the text to them. This will help those who cannot read a particular language well. There is also the option of translating to their own language. Google is adding the camera to Search

So now when a user searches for something, they will be able to see 3D results and be able to place it in their own space as well. For medical students, this could be game-changing based on what Google is showing. Users will be able to look at shoes up close, directly from search. Basically if you search for a shark in Google, there is an option saying see in 3D. And now the Shark is on the stage, thanks to the AR/3D feature.

Google Pixel 3a, Pixel 3a XL

Google Pixel 3a, Pixel 3a XL are more affordable variants of the Pixel 3 series of smartphones. The two phones will come with a 5.6-inch and 6-inch display respectively with a single rear and front camera, powered by the Qualcomm Snapdragon 670 or 710 processor coupled with 4GB RAM. The phones will run Android Pie out of the box.

Android Q beta is already out, and Google is expected to elaborate more on the features. The focus will be on privacy with Android Q, where users will have more control over location data. Google will also be adding support for foldable displays like we have seen from Samsung, Huawei, and other players like Xiaomi, Motorola are also planning. The Settings panel will also see improvements in Android Q, and there will be support for 64-bit apps on this version of Android.