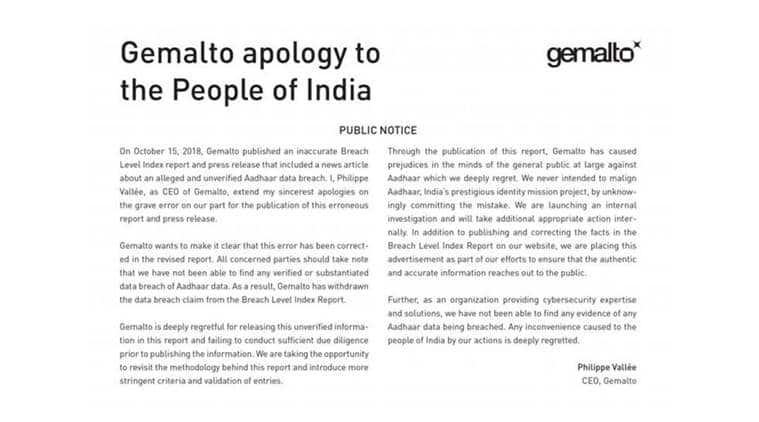 Issuing a fresh apology, digital security firm Gemalto on Saturday said an error in its report, which claimed that data breach incidences in India were the second highest globally due to compromise in the Aadhaar database, was rectified and that the company had not found any “verified and substantiated breach of Aadhaar data”.

The report, which was issued on Monday, had claimed that 1 billion records were compromised in Aadhaar breach incident, including name, address and other personally identified information.

Gemalto CEO Philippe Vallee expressed deep regret for “failing to conduct sufficient due diligence before publishing this information”. Through an advertisement published across newspapers, Vallee said, “Through the publication of his report, Gemalto has caused prejudices in the minds of the general public at large against Aadhaar which we deeply regret. We never intended to malign Aadhaar, India’s prestigious identity mission project, by unknowingly committing the mistake.”

The CEO added, “We are launching an internal investigation and will take additional appropriate action internally. Further, as an organisation providing cybersecurity space expertise and solutions, we have not been able to find any evidence of any Aadhaar data being breached.”

“Gemalto profusely regrets on its Breach Level Index Report 2018 and the subsequent press release issued in India on 15th October where it has by mistake taken into account an unverified news article about alleged Aadhaar data breach,” the company had said in a statement.

The firm had also said that it had updated its Breach Level Index Report 2018. “…all concerned should take note of it that we have not been able to track any verified or substantiated data breach of Aadhaar database of UIDAI. As a result, Gemalto has withdrawn this alleged data from the Breach Level Index. Any inconvenience caused to UIDAI is deeply regretted,” the statement said.