From iPhone 13 to polishing cloth, every product Apple introduced in 2021 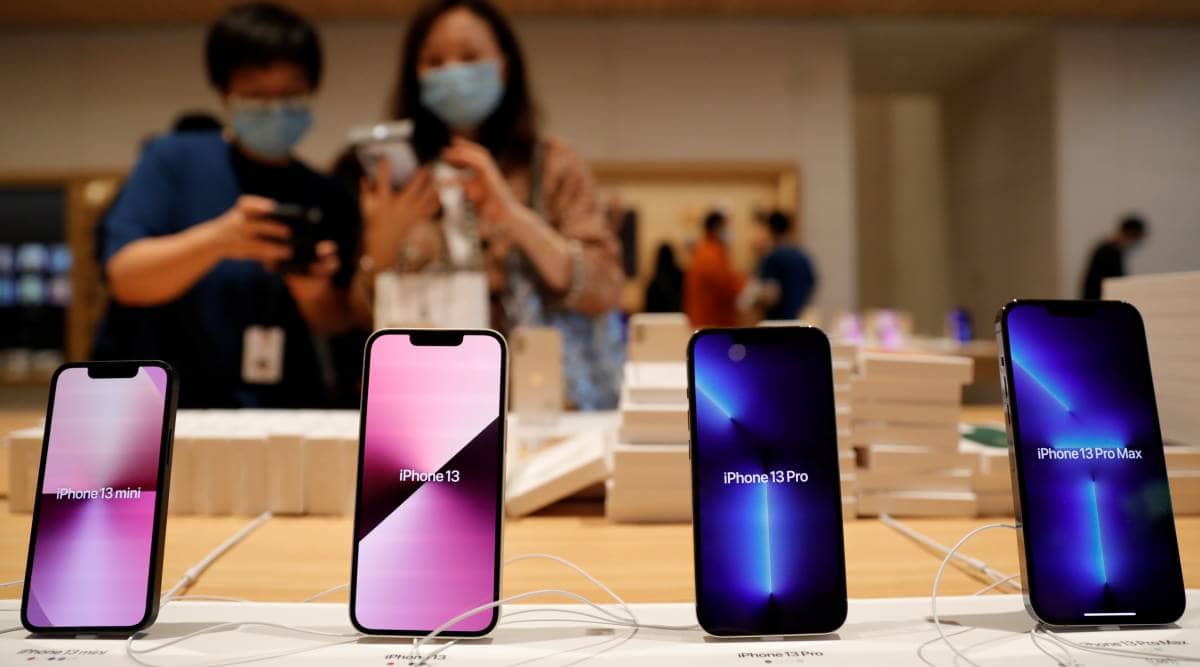 2021 was a busy year for Apple, bringing a ton of new products in the market. (Image credit: Reuters)

Few companies make a profound impact on consumers’ daily lives as Apple does. Although Apple’s product lineup is relatively small compared to that of its rivals, its products reach a broad set of users despite its premium pricing.

Even though there weren’t many sweeping changes in 2021, the year will be best remembered for fixing things that most mattered to end consumers. The new MacBook Pros and iMacs with Apple’s own chipsets, a new iPad mini and the improved line of iPhones seem to have retained Cupertino’s charm in the second pandemic year.

Here is a list of all the products Apple debuted in 2021.

Is the iPad Pro a Mac? We don’t have a clear answer yet, but the iPad Pro is surely getting all the right attention. The 11-inch and 12.9-inch iPad Pros with Liquid Retina XDR display are equipped with Apple’s powerful M1 chip. Both the high-end iPads are aimed at creative professionals, and the features they come with lean towards a new segment of “pro” devices. How about up to 2TB of high-speed storage? The more we examine the iPad Pro the more it becomes clear where this high-end 5G-enabled tablet actually fits in Apple’s grand scheme of professional-grade devices. Read our review of the iPad Pro here. 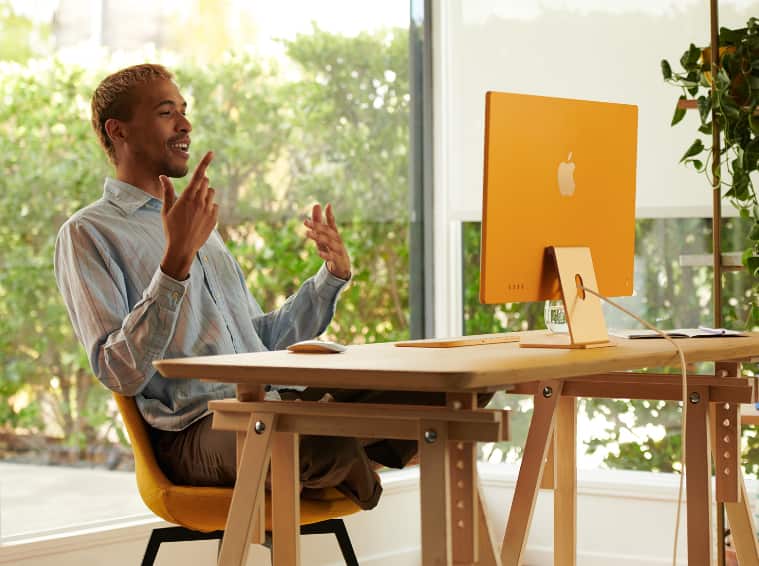 The launch of the new iMac brought back the thrills of a device that put Apple back in the spotlight in 1998. The reimagined iMac with the M1 processor is both familiar yet different at the same time. It’s super-thin at 11.5 millimeters, and ships in a dash of rainbow colours, including orange and yellow. The new iMac is a tribute to the original iMac but at the same time acknowledges the modern world we live in. The iMac has a 24-inch 4.5K Retina display, a 1080p HD webcam, and a six-speaker sound system plus two pairs of force-cancelling woofers. The new iMac is an aesthetically-designed all-in-one computer that may look like a piece of furniture but comes alive thanks to the software and chip that powers it. Read our review of the M1 Mac here. 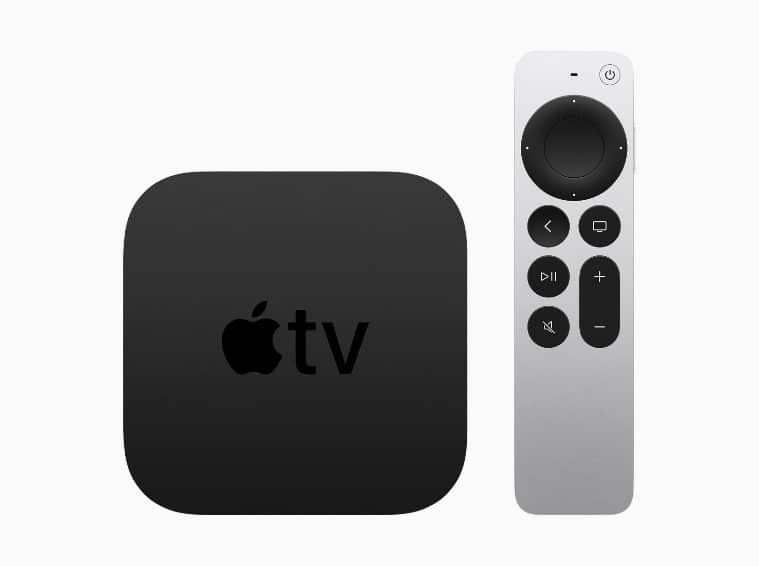 The new Siri remote is the best part of the Apple TV. (Image credit: Apple)

Although there is divided opinion on Apple’s living room strategy, for now the Apple TV 4K represents the best of what Cupertino has to offer. Design-wise, the device hasn’t changed a bit but what’s inside sure has. It is powered by Apple’s A12 Bionic chip, and has support for high frame rate HDR (High Dynamic Range) and Dolby Vision video. But the box isn’t what drives consumers to consider the Apple TV in the first place. It’s the new Siri remote, which replaces one of the most hated Apple products of all time. The new Siri remote has a tweaked design, replacing the controversial touchpad in place of a clickpad with five-way navigation. Read our review of the Apple TV 4K here. 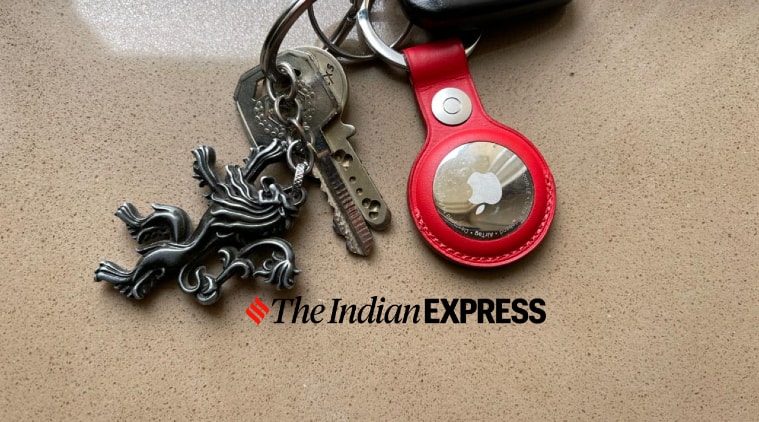 An Airtag is a tracker that you can attach to your items to keep track of them. (Image credit: Nandagopal Rajan/Indian Express)

AirTags aren’t a product everyone finds utility in, but they exist no matter what people say. AirTags work with the Find My app to help locate devices and accessories like keys or wallets. There is nothing wrong with the idea of AirTags, but the way these have been used to track luxury vehicles for stealing has been a matter of concern. It makes us wonder if Apple would want to launch a second-generation at all. Read our review of AirTags here.

During the spring event, Apple launched two new versions of the iPhone 12 and iPhone 12 mini in a new purple shade. No, the phones weren’t different from inside and outside, except they were made available in a new colour option.

Taking advantage of the iPhone’s MagSafe support, Apple released a new battery pack earlier this year that snaps onto the back of the iPhone 12 to provide extra battery life. When the accessory snaps on the back of an iPhone, it can charge a phone with 5W of power — slower than the 15W one gets from a regular MagSafe charger. The Apple-made external battery packs for iPhones have been heavily criticised but the new one seems better off despite trade-offs. 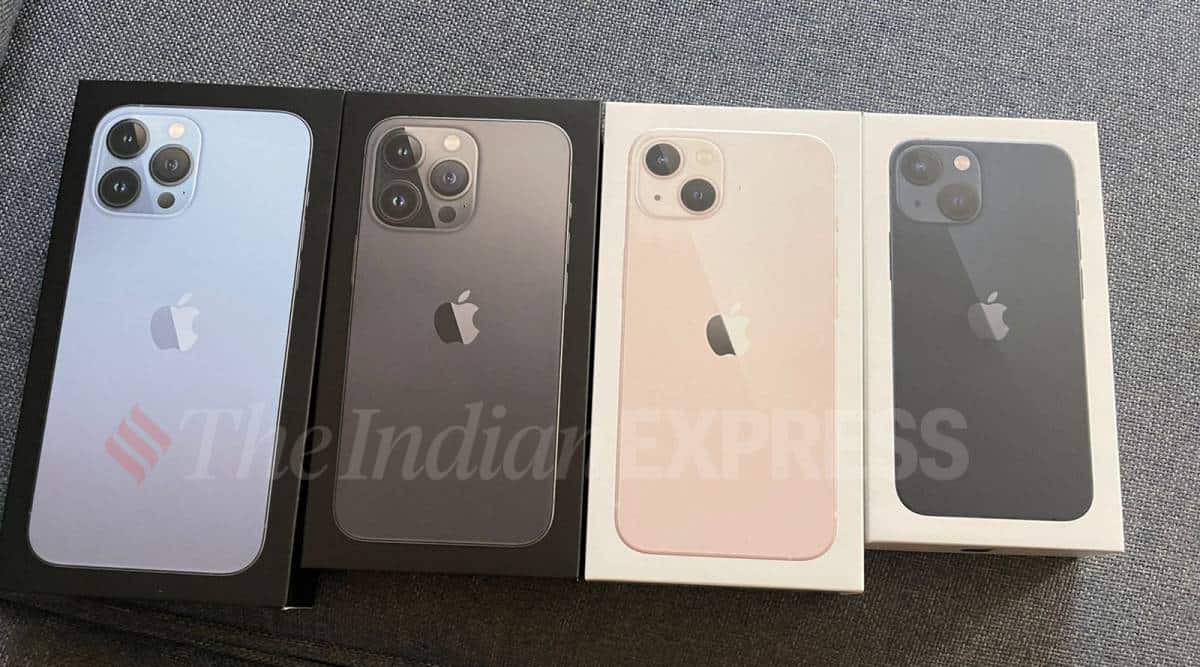 The new iPhone 13 series is much improved over the previous generation. (Image credit: Nandagopal Rajan/Indian Express)

There might no longer be queues outside Apple stores, but Cupertino’s most popular product is still in hot demand. The new iPhone models— the iPhone 13 mini, the iPhone 13, the iPhone 13 Pro and iPhone 13 Pro Max — didn’t usher in a new design or breakthrough improvements compared to last-generation devices. But they do include better cameras, improved high-refresh-rate displays on the high-end models, a new portrait mode for shooting videos, and longer-lasting batteries. Despite the competition from rivals, the iPhone still works because of its simplicity and familiarity. No, it hasn’t got the design change many expected, but the new Apple Watch now has a display that is 20 per cent larger than the Series 6. This means it can display 50 per cent more text and also has a keyboard that you can tap or swipe to type out text messages. Although many say the pace of innovation is slowing at Apple, the truth is the era of putting new features/or design change with every new version is past us. The Apple Watch is slowly transitioning into the territory of the iPhone, a device that gets big features every two or three years. Read our review of the Apple Watch Series 7 here. 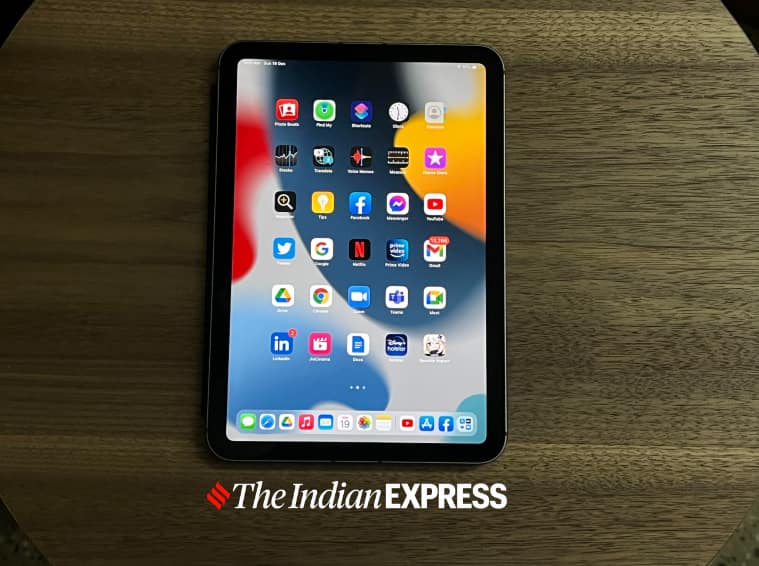 Perhaps the most interesting product other than the M1 iMac that has come out of Cupertino this year is the new iPad mini. It’s a game-changer if you know how to fully utilise the product to the fullest. No, it’s not replacing your iPhone or iPad Air but rather trying to fit in between the two and creating a new segment of a mobile product that is a cross between mobiles and tablets. The iPad mini can be used as a digital note-taking pad, a gaming tablet, or a content consumption device. For many, the iPad mini is a miniature version of the iPad Air but that’s where things begin to change. Even a small change makes a huge difference and Apple did just that. It makes us wonder what Apple was thinking while designing the iPad mini and its potential benefits. Read our review of the iPad mini here.

It seems Apple has no plan to give a facelift to the entry-level iPad anytime soon, and there’s a valid reason why the budget iPad still looks the way it does. The new ninth-generation iPad has the same classic iPad vibe we love but its internals are also getting better. It’s got a 10.2-inch screen, a powerful A13 chip, and a new 12MP ultrawide camera with Center Stage, which uses machine learning to adjust the front camera during FaceTime video calls. It also works with the first-generation Apple Pencil. The entry-level iPad is squarely aimed at students, and its current price gives consumers all the benefits of the Apple ecosystem and access to apps. 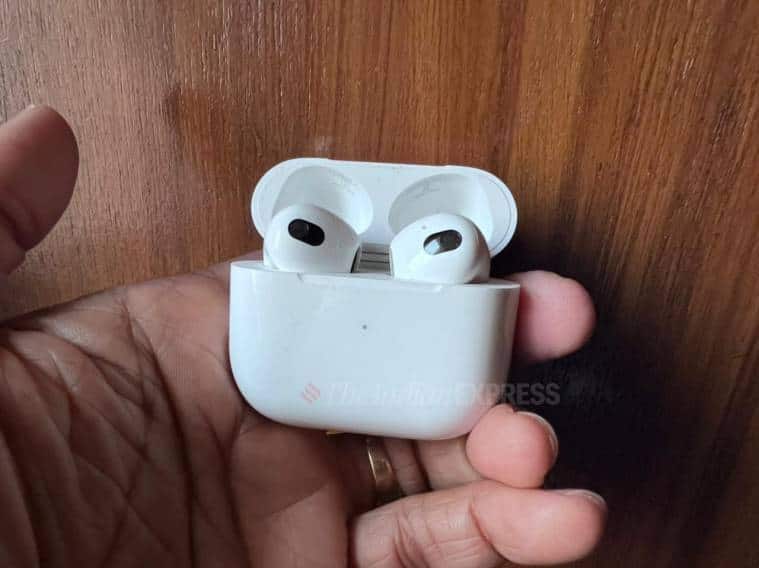 In a sea of truly wireless earbuds, the AirPods 3 may seem like an expensive purchase, but they do offer certain features that justify their high price tag. The AirPods 3 is Cupertino’s version of entry-level wireless buds but with all the goodness that Apple is known for. The third-generation AirPod has a new smaller design, improved audio features, and presence of Spatial audio. Some might say the AirPods Pro is a better purchase (and yes, they are), but having a built-in noise-canceling capability does not mean the audio quality is any better. The AirPods 3 have a slight edge over the AirPods Pro in terms of audio playback, and that itself is a big reason to buy these earbuds. Anyway, the AirPods 3 are not replacing the aging AirPods Pro, which will get replaced with a new model sometime next year. Read our review of the AirPods 3 here. 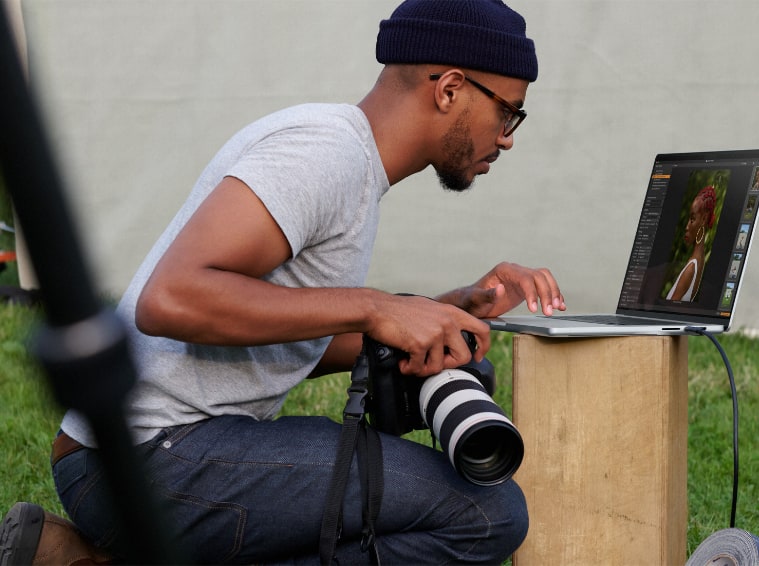 The new MacBook Pros neither have an Intel processor under the hood nor have a “Touch Bar” and “Butterfly” keyboard. Well, with new models Apple is looking at the future where the emphasis will be given to the function over form. The new 14-inch and 16-inch MacBook Pros addressed user complaints and tried to fix them by adding features tailored for programmers and other professional users. The new machines are pricey (in fact, they cost more than their predecessors) but come packed with configurations (either in “M1 Pro” or “M1 Max” processor options) that make them insanely powerful. The new MacBook Pros are a prime example of how sometimes a solution to a problem can be fixed if the product is designed keeping the target audience in mind. Apple added a splash of colour to its HomePod mini, offering the smart speaker in yellow, orange, and blue. The HomePod mini hasn’t changed from the inside, besides there is an option to buy the device in a total of five colours. The significance of a paint job is nothing except to increase sales of Apple’s entry-level smart speakers which face tough competition from the Alexa-powered Echo speakers. With Apple’s smart home strategy still in early stages, the HomePod mini seems to be the only product Cupertino is putting all its bets on. But that might change in the future when a new smart home device which is reportedly in the works, integrating Apple TV with a HomePod speaker hits the market. Read our review of the 2021 HomePod mini here. One of the most in-demand products from Apple this year is not the iPhone 13 or MacBook Air but a $20 cleaning cloth. In fact, this pricey polishing cloth to clean your Apple devices was so popular that it sold out immediately. Some questioned the craze behind the popularity of the cloth; others mocked Apple for changing a “premium” to pay for a polishing cloth when similar alternatives are available for a fraction of the price.

Advertisement
Must read |From Sir Clive Sinclair to Masayuki Uemura, the tech pioneers we lost in 202

He bombed the Nazis, outwitted the soviets and modernized Christmas