Facebook has denied that it plans to use the Digital India Profile pictures to show support for its controversial Internet.org zero-rating programme 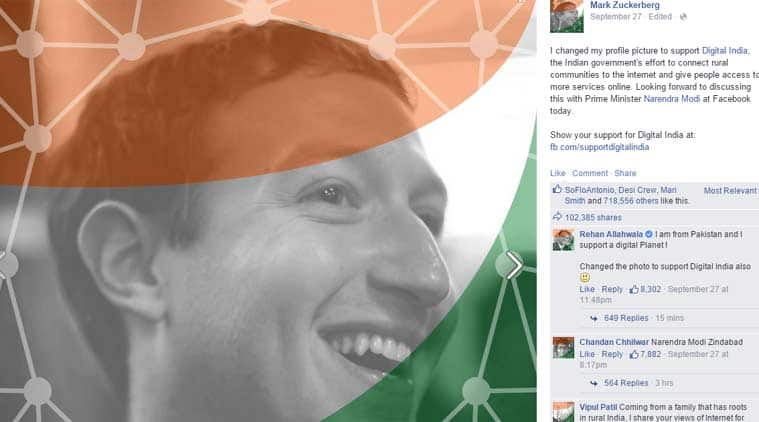 Mark Zuckerberg had changed his profile picture with Digital India support tool, but some allege that the tool will be used to show support for Internet.org, Facebook’s controversial zero-rating app.

Facebook’s tri-colour profile picture tool, which was launched by the social media giant, as a show of support to the Digital India initiative, is facing criticism as some reports state that the company plans to use these pictures to show support for its controversial Internet.org program. Facebook has denied the charge.

The tool was first announced by Facebook CEO Mark Zuckerberg on Sunday, ahead of the townhall meeting with Prime Minister Narendra Modi. The tool lets users change add a tri-colour layer to their profile picture and it says created using fb.com/supportdigitalindia.

Now according to some reports, a screenshot of a source code showed that Facebook had classified these pictures in the class tag internetOrgprofilepicture. Thus it was alleged that Facebook would use these to show that it has support for the Internet.org programme. Facebook has recently re-branded Internet.org as Free Basics app.

Facebook has however denied the controversy over the source code of the Digital India profile picture. A Facebook spokesperson issued this statement, “There is absolutely no connection between updating your profile picture for digital India and Internet.org. An engineer mistakenly used the words “Internet.org profile picture” as a shorthand name he chose for part of the code. But this product in no way connects to or registers support for Internet.org. We are changing the code today to eliminate any confusion.”

Facebook’s Internet.org has come under massive criticism in India over the current debate over net neutrality. Internet activists say that just as a zero-rating program or app by a teleco (Airtel had planned to launch one but scraped it later), Facebook’s free internet zero-rating app is also in violation of net neutrality.

Activists say that it creates a walled-garden approach to the Internet, which is against the core of the net neutrality principle. Facebook has denied this and said that Internet.org helps more and more people get online.

Recently Facebook relaunched Internet.org as Free Basic app with the app and web platform, providing access to over 250 services. It is now live in 19 countries including India and will be part of the “larger objectives” of Internet.org. All developers will be free to add their apps on the platform as long as they meet the technical criteria.

In an interaction with the Indian Express Facebook CEO and founder Mark Zuckerberg also denied that they wish to create a parallel to the Internet as it exists currently.

Facebook certainly wants to “spread the Internet, the whole Internet,” he said and added that Internet.org is just one of the initiatives under this.

“We are working on new technologies like unmanned solar powered aircraft that can fly for months at a time and beam down access, we are working on satellites, laser communication systems as well as new business models like the Free Basics programme which we hope to roll out widely in India and other countries,” Zuckerberg told The Indian Express.

Gurjant Singh is chasing dreams on the hockey turf