Digi Yatra to bring facial recognition system to airports: Here’s how it works

Digi Yatra, the national digital traveller system wants to bring a system where someone's face would suffice as the boarding pass itself. Digi Yatra wants to bring facial recognition to airports in India: Here’s how it will work. (Image source: Jayant Sinha/Twitter)

Thanks to the use of facial recognition technology, fliers will soon no longer need any documentation in order to enter airports and board their flights. This is because the Digi Yatra, the national digital traveler system wants to bring in a system where someone’s face would suffice as the boarding pass itself, and allow them to enter the airport, do their check-in and pass through the security to get to their flight. The ‘facial recognition’ system has been in testing at the Kempegowda International Airport in Bengaluru.

Most recently, former minister of state for civil aviation Jayant Sinha tweeted about this, highlighting how all airports and airlines are working to make this system happen. Of course, his tweets raised questions around the use of facial recognition technology, which incidentally has been banned in Europe. More recently, Google CEO Sundar Pichai also voiced his approval in support for the ban, saying the technology needed to be fully tested before it is rolled out.

To the best of my knowledge, India will be the first country in the world to have a national digital traveler system #DigiYatra 🇮🇳🇮🇳 All our airports and airlines are collaborating to make this system happen for the benefit of their passengers. Proud to have worked on this 🙏🏼 https://t.co/7QxyQt4T5r

Sinha in his tweeted also tried to allay criticism of the system by adding that this would be GDPR compliant. GDPR is the General Data Protection Regulation of the European Union. For now, the Digi Yatra system is voluntary, meaning you cannot be forced to participate in the facial recognition system in order to enter the airport.

Further, according to the Digi Yatra policy, the Face biometrics data is supposed to be purged out from the system once the passenger’s flight takes off.  Here is what the Digi Yatra system wants to set up and how it will work. 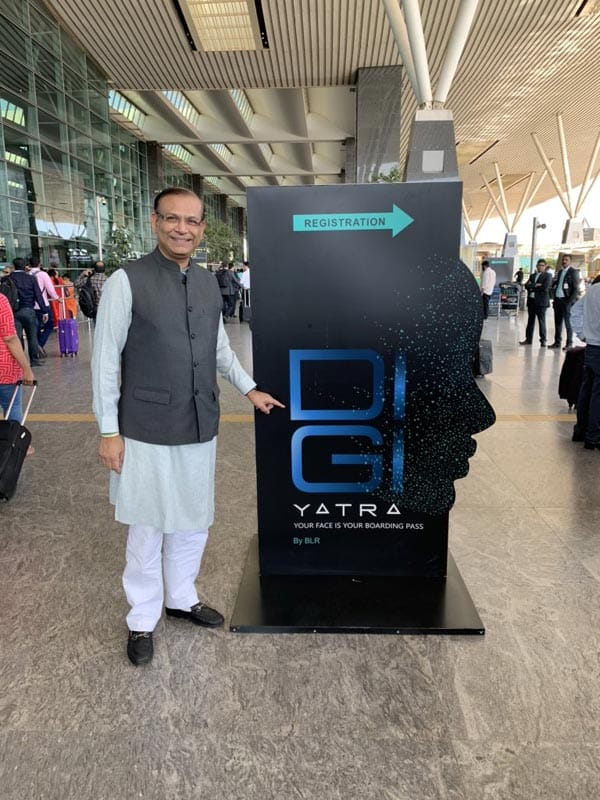 Digi Yatra: What is the idea ?

The basic premise behind Digi Yatra is to reduce human intervention and allow for digital processing of passengers at an airport. This would be done using facial recognition system at check points such as entry, security check, before boarding, etc. The idea is to ensure paperless travel and reduce the congestion at airports.

The pilot has been implemented in Bengaluru and Hyderabad airports last year. The system is likely to be set in place in Kolkata by February 2020. Trials are also expected in Delhi airport.

In Bengaluru, facial recognition is also coming to the railway stations. Read our full report.

Digi Yatra: How will users register for this?

A user will be able to enroll in the Digi Yatra system by providing their name, email ID, mobile number, details of identity, which includes Voter Id, Driving License, Aadhaar, Passport, etc.

Once this is submitted, a Digi Yatra Id will be created. After this, the passenger can quote this number while booking the ticket, and their data will be passed on to departure airport by the airlines.

On their first travel, the passenger will have to go to the registration kiosk at the airport for validating the ID.

If the user is relying on Aadhaar for verification, it will be done online.

When a different ID is used, CISF personnel will manually verify the user.

After the verification is successful, a photo of the passenger is added to Digi Yatra profile in the central system. 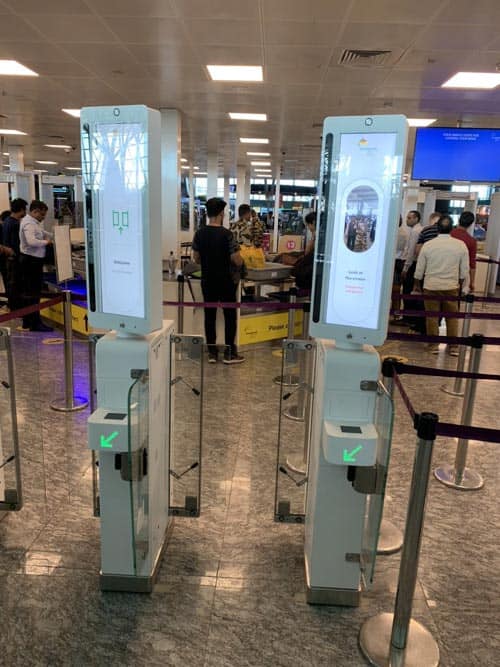 The Facial recognition system at Bengaluru Airport ahead of the security clearance. (Image via Jayant Sinha Twitter account)

Digi Yatra: What happens after you register?

Once users register, they won’t have to carry their id cards at all times, especially when entering the airport or checking in. Of course, passports will still be needed for international travel.

At an E-Gate, the passenger will be able to scan their boarding pass or e-ticket, and the system will validate the passenger details and flight details.  The user’s identity is verified by the Digi Yatra ID relying on Face Recognition.

When the verification of ticket and Digi Yatra ID is successful, the e-Gate will open and the passenger will be able to enter the airport, go to security, etc.

The eventual idea is to let passengers board flights through e-Gates operated on the facial recognition system.

The Digi Yatra system is ‘claimed’ to be GDPR compliant with ‘privacy’ by design, though experts have raised questions about the use of facial recognition. Across the world, there is a debate over the user of facial recognition technology with fears that it could be used for mass surveillance.

According to the Digi Yatra policy, it does have some privacy provisions in place. For one, the Face biometric data is supposed to be purged out from the system once the passenger’s flight has taken off. The argument is that this ensures “Privacy by Design”.

Other points the privacy policy are that all personal day “shall be processed fairly and lawfully”, and that it should “obtained only for the specified lawful purpose, and shall not be further processed in any manner other than for that purpose or those purposes.”

The provisions also say that “personal data shall not be transferred nor stored to a country or territory outside India unless it is needed for the purpose of carrying out the Passenger Identification/ validation process at the Destination Airport and only with the willful consent from the Passenger.”

With regard to international travel all biometrics such as face, iris and fingerprints, the “process will be as mandated by the government of India as per existing protocols prevalent at that time.” Only passenger travel Logs without the Biometric data shall be stored for the purpose of audits in accordance with the government’s mandate.

But it also says that any security agency or government agency can be given access to the passenger data depending on the “current/ existing protocols prevalent at that time.”