Apple Watch goes solo with Watch Series 3, but don’t dump your phone yet

The Apple Watch Series 3 still needs regular contact with an iPhone, and for most tasks, the phone needs to be on and connected, even if it's nowhere nearby. So you can't get away with ditching the iPhone altogether. 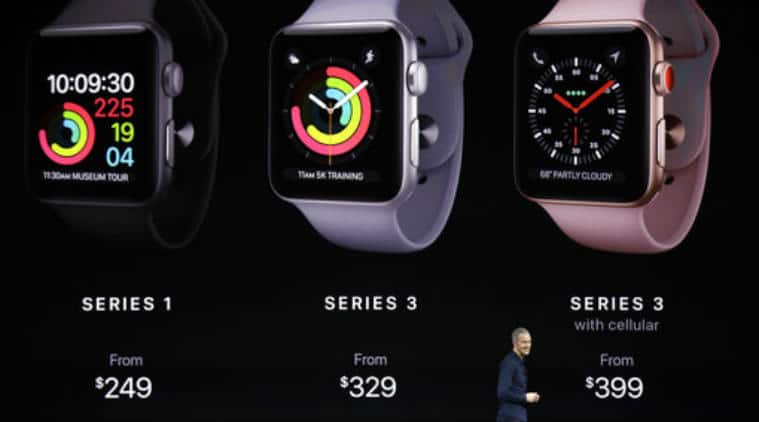 A new model with its own cellular-network connection is Apple’s next step toward an untethered world. Now you can make and receive calls and messages on the watch while leaving your phone at home. (Image Source: Reuters)

A chief gripe with Apple Watch is that it requires you to keep an iPhone with you for most tasks. The inclusion of GPS last year helped on runs and bike rides, but you’re still missing calls and messages without the phone nearby. A new model with its own cellular-network connection is Apple’s next step toward an untethered world. Now you can make and receive calls and messages on the watch while leaving your phone at home.

But the watch still needs regular contact with an iPhone, and for most tasks, the phone needs to be on and connected, even if it’s nowhere nearby. So you can’t get away with ditching the iPhone altogether. (Android users have their own wristwear options, including Samsung Gear and Android Wear watches, some of which can already manage their own network connections.)

The new Apple Watch Series 3, distinguished by a red crown, comes out Friday starting at about $400. You can forgo cellular, and the red crown, for $70 less. Or get a first-generation model, without GPS, for about $250.

You might not want to bring your phone on a short jog; the watch can still keep you in touch. Or you can leave the phone home while walking the dog or performing a quick errand. You need a data add-on from the same wireless provider as your phone. It typically costs $5 or $10 a month and uses the phone’s data allotment. While the watch technically has its own phone number, the major carriers have worked out number syncing. Calls to your phone will go to the watch, and calls from the watch will appear on caller ID with your regular number. Same goes for texts and iMessage chats.

Calls use the watch’s speaker and microphone, or wireless earphones. Colleagues say call quality was fine. It came in handy for sneaking in runs during conference calls (though if you’re my boss, just kidding! Now, about that raise …). Phone calls and iMessage chats work on the watch even if your phone is off, as do turn-by-turn maps and queries to the Siri voice assistant. For texts, the phone needs to be on — somewhere. With the phone on, you can perform a variety of other tasks, including checking weather apps, Yelp recommendations and notifications that go to the phone.

Coming soon: the ability to stream Apple Music, even with the phone off. Unfortunately, this doesn’t apply to rival music services or Apple’s podcast app.

On Wednesday, Apple acknowledged that the Series 3 can have trouble connecting to a cellular network. This can happen when the watch tries to join a Wi-Fi network you’ve previously logged onto using an iPhone or other Apple device. The company says it is investigating a fix for the problem. In the meantime, there’s a workaround: Get your phone to “forget” the errant Wi-Fi network. Because the watch screen is small, many apps offer only a sliver of information and refer you back to the phone to view more. That was little more than an annoyance when the phone was in the same room. If you’ve left the phone behind, though, you’ll be left hanging.

You can also run into trouble while roaming, particularly internationally. For one thing, engineers weren’t able to squeeze in support for cellular frequencies around the world. And outside the US, only a handful of carriers are supporting the cellular watch. In any case, don’t forget to switch to airplane mode on flights. Cellular data also drains the battery quicker. Apple’s promised 18 hours of battery life includes about four hours of such use. An hour of phone calls over LTE will drain the battery completely.

I got dropped from two conference calls because the battery was low to begin with. Plan ahead. A spare watch charger at your desk helps for those days you’re dumb enough to leave your phone on the kitchen counter.

It can be handy to untether the watch at times, but it’s not always necessary. Even when tied to the phone, Series 3 offers improvement such as tracking elevation, so you get credit for climbing stairs or jogging up a hill. And you can now hear Siri responses on the watch speaker, something enabled by the new version’s faster processor.

For owners of past models, a software update out this week, watchOS 4, will bring easier access to music playback controls when exercising — just swipe left. There are more prompts when reaching or nearing daily goals, and options for multiple sports in a single workout. A new heart rate app now shows heart rate at rest and averages when walking or recovering from exercise. These can help you gauge your overall fitness.

And if your heart rate is high without any signs of exercise, you’ll get an alert. You enable this when you first open the heart rate app. It can signal health problems, though Apple is stopping short of telling you to see a doctor or visit the emergency room, as the watch isn’t marketed — or certified — as a medical device.