Apple launched a bunch of new products at its “Spring Loaded” event last night. These include iPad Pro 2021, a new iMac, Apple TV, and AirTags. The event was live-streamed via Apple’s official website and YouTube channel. If you want to keep up with the latest news, then you can also come back here to get all the updates on new Apple devices.

At this year’s ‘Spring Loaded’ event, Apple took the wraps off its new iPad Pro with a mini-display and an M1-level chip. The Apple Pencil remains the same. The company didn’t launch an iPad mini and an entry-level iPad.

Apart from iPads, we also see the launch of new iMac models that are powered by Apple’s M1 chip. They are rumoured to get some design upgrades as well. In addition to this, Apple finally unveiled its AirTags, the Bluetooth tracker, as well as a new Apple TV. Apple is all set to roll out the iOS 14.5 update starting next week. Read on to know more about the products that were launched at the event.

Apple's "Spring Loaded" event will take place today. The Cupertino giant is expected to unveil a bunch of new products, including iPad Pro 2021, a new iMac, an iPad Mini 6, Apple AirTags, and the new Apple TV.  Apple event will begin at 10 AM PDT (10:30PM IST) and it will be live-streamed via Apple's official website.

And that’s a wrap

And that’s a wrap. For more details, you can check out the below links.

- Apple AirTags to track your belongings launched at $29

-Why the M1 chip powering both the iMac and iPad Pro is a game-changer?

The 2021 iPad Pro has been unveiled in a new White colour variant. The 11-inch iPad Pro comes with a starting price of $799, whereas the 12.9-inch model with Liquid Retina display will cost you $1099. You can order the new iPad pro starting April 30 and it will be available for purchase in May.

It is powered by Apple's M1 system-on-a-chip. Apple says users will get 50 per cent better performance than the previous iPad Pro. Apple claims the graphics of the new iPad Pro is 50 times faster than before. It comes with support for 5G connectivity, Thunderbolt and USB-4 support. Apple says it is offering users the 'fastest and most versatile port ever on an iPad.' The 2021 iPad Pro also comes with 2x faster storage access and a 2TB storage configuration. The 2021 iPad Pro even offers support for the gaming controllers from Xbox Series X and PS5.

The newly launched iMac ships with macOS Big Sur. With Mi chip, Apple claims users will get up to 85 per cent faster performance than the previous generation. Apple claims GPU performance is up to two times faster than before, so the photos will load faster and video edits will become much smoother. The iMac also supports iPhone and iPad apps like Headspace and games like Sky. It comes with Touch ID, 4 USB C ports for I/O, and an ethernet connection, along with a new power connector that attaches magnetically. The new iMac will be available for purchase in the second half of May. Its price starts from $1499, which is the price for the seven colour options.

Apple has launched a new iMac, which is available in a lot of colours, including Green, orange, yellow, red, and blue. It is powered by Apple’s own Silicon, the M1. The Cupertino giant has added a 1080p FaceTime camera on the front of the new iMac. It comes with a Truetone display, and there are two small fans instead of a thermal system. Apple says the product won't make more than 10dB of noise. The company also asserts that the new machine is about 11.5mm thin. It offers a new set of speakers with two pairs of woofers and a high-performance tweeter, so there are a total of six stereo speakers. Apple says these are 'coupled' with advanced algorithms to deliver spatial audio to hear in Dolby Atmos.

It supports Dolby Vision and is powered by Apple's A12 Bionic processor. The new 4K Apple TV allows users to play HDR content at a faster framerate. This means that the sports and other high-resolution content will look good. Users will also be able to use their iPhone's light sensor to calibrate the Apple TV to help adjust any slight shifts in colour and brightness. One will also be able to play 4K HDR video in 60fps. Users can also AirPlay the 4K 60fps Dolby Vision videos shot using the iPhone 12.

The newly launched Apple TV 4K is priced at $179 for 32GB and $199 for 64GB. It will be available for purchase in May. The company has also unveiled a new Siri Remote with a new design and click wheel.

The new Apple TV 4K will be available for Rs 18,900 from Apple.com. It is also available through Apple Authorised Resellers and select pay TV providers. Customers can order the new Apple TV 4K beginning Friday, April 30, with availability beginning in the second half of May in more than 30 countries and regions, including the US.

The new Siri Remote will be available separately for Rs 5,800, and is compatible with the previous-generation Apple TV 4K and Apple TV HD.

Apple has also launched AirTags that are small tracking tiles with Bluetooth connectivity support. So, one can use them to find lost items, similar to Tile. You will be able to find them right in the Find My app. AirTags have a built-in chip that allow them to connect to an iPhone, relaying the position of devices that Airtags are attached to. You can use an ‌iPhone‌, iPad, and Mac to track the location of AirTags to much like you do to find missing Apple devices. It is priced at $29 and will be available for purchase starting April 30.

AirTag will be available in one and four packs for Rs 3,190 and Rs 10,900, respectively, from apple.com and through Apple Authorised Resellers beginning Friday, April 30.

The company has unveiled a redesigned Podcasts app, and channels that will help you find new shows. Further, Apple podcast subscriptions have been launched in 170 countries. It enables you to unlock new content as well as additional benefits like ad-free listening.

In addition to this, the iPhone 12 and iPhone 12 mini are now available in a new purple colour option. These iPhones were previously launched in Blue, Green, Black, White, and (PRODUCT) RED colour options.

The Apple Spring Loaded 2021 event will begin in 15 minutes. You can livestream the event below.

Apple is expected to launch the new iMacs, a new iPad Pro, and possibly the Apple AirPods 3, among other products, including the Apple AirTags.

The Apple event starts at 10:30 pm IST and is just two hours away. Ahead of the event, let us remind you that Apple is expected to launch the new iMacs, a new iPad Pro, and possibly the Apple AirPods 3, among other products, including the Apple AirTags.

New leaks are showing off holders and cases for the Apple AirTags. The AirTags are Apple's upcoming Tile-like smart tracking devices that can be used to keep personal belongings safe and secure. The device is expected to launch today alongside the other new Apple products. Check out the tweet below.

Apple Event 2021 Today: How to watch it live

Apple's latest event is just six hours away. It will begin today at 10:30PM IST and will be live-streamed via the company's official website and YouTube channel. We have embedded the livestream link below, so you can even watch Apple's 'Spring Loaded' event here.

Apple Store is down ahead of 'Spring loaded' launch event

Apple has temporarily taken down the online store ahead of its "spring loaded" event at which the company will reveal multiple new products. So when you visit Apple's online store, it is showing the familiar "Be right back" message. This has become the usual tradition ahead of any new Apple product launch event. 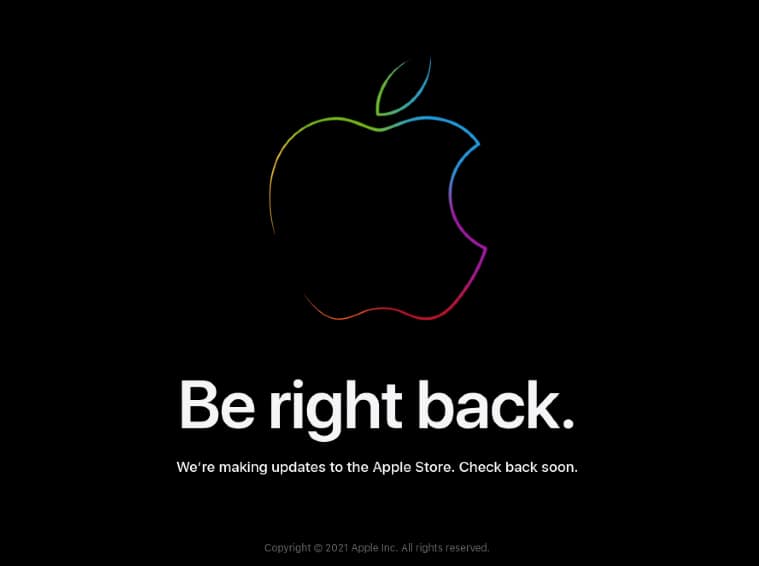 Apple's latest 'Spring Loaded' event 2021 event will kick off today at 10:30PM. The company is expected to unveil a new iPad Pro, AirTags, new iMacs, and more. Apple will also likely announce the rollout of the iOS 14.5 update.