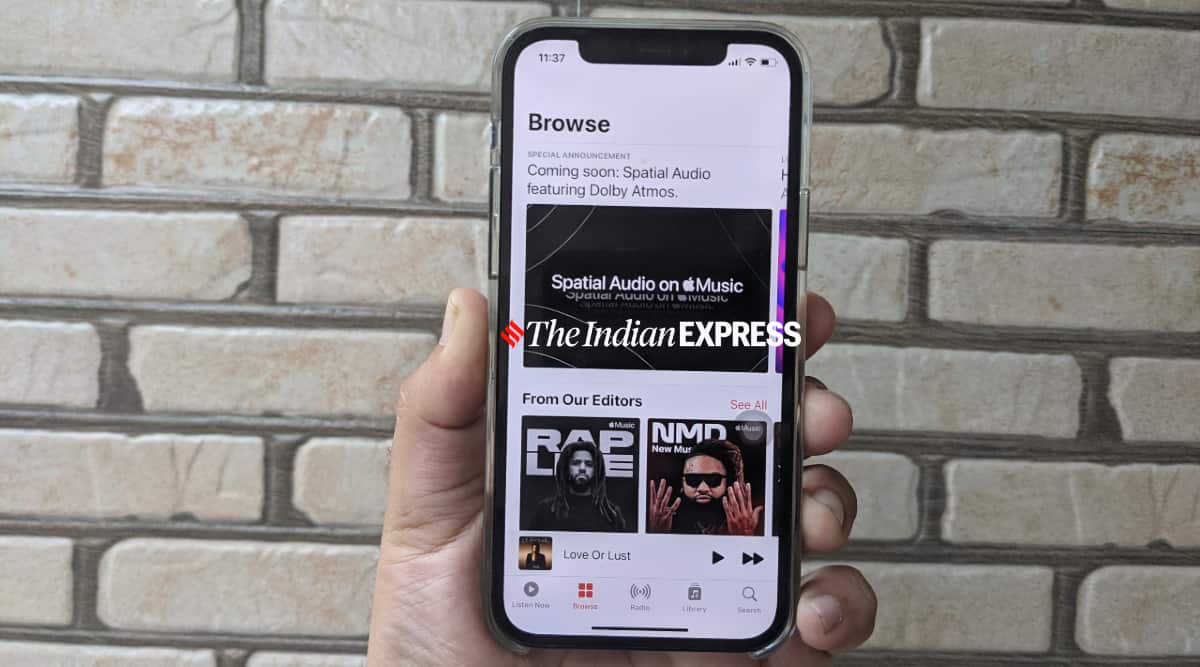 Apple on Monday announced that it is adding spatial audio with support for Dolby Atmos as well as lossless music for all of its subscribers, starting this June. More than 75 million tracks will be available in lossless audio, and that too at no extra cost for Apple Music subscribers. The move is aimed at Spotify, which plans to add a new high-end subscription tier with CD-quality, lossless audio files later this year. However, unlike Apple Music, users have to pay a premium for Spotify’s Hi-Fi tier.

Do you care about high-fidelity audio? Will AirPods support lossless audio on Apple Music? We answer all your questions on Apple Music getting lossless and spatial audio support.

What is Dolby Atmos Music?

Dolby Atmos Music is a 3D audio format that promises an “immersive” listening experience. It’s a lot different from traditional stereo music. When combined with Apple’s spatial audio feature, it essentially makes it seem like audio is coming from every direction. The idea is to mimic how you experience audio in cinema.

How can I listen to Dolby Atmos music in Apple Music?

Apple Music will automatically play Dolby Atmos tracks on all AirPods and Beats headphones with an H1 or W1 chip, as well as the built-in speakers in the latest iPhone, iPad and Mac models. For all other headphones, you’ll need to turn on the option to hear Dolby Atmos tracks by going Settings > Music > Audio and set Dolby Atmos to Always On.

Here’s the full list of devices that can handle spatial audio with Dolby Atmos support:

When is Dolby Atmos on Apple Music launching?

Spatial Audio with Dolby Atmos will be available in June for Apple Music subscribers.

Do I need to pay extra for spatial audio with support for Dolby Atmos?

No. Apple is adding spatial audio with support for Dolby Atmos Music at no extra cost. Keep in mind, Apple Music is a paid music service. Apple Music subscription costs Rs 99 a month for the individuals.

Yes, lossless audio support is officially coming to Apple Music. A lossless audio file ( these include FLAC, WAV, or AIFF) format is considered to be the best format for sound quality. Such types of files are known as “hi-res” because they are better or equal to CD quality. The tradeoff is that these files are very large in size.

Tell me about the quality of Lossless Audio on Apple Music

Apple Music’s Lossless tier starts at CD quality (16 bit at 44.1 kHz) and goes up to 24 bit at 48 kHz. If you are an audiophile, Apple Music will also have hi-res Lossless up to 24 bit at 192 kHz. Just to make it clear, you will need external equipment such as a USB digital-to-analog converter to take advantage of the hi-res lossless.

None of the AirPods support lossless audio on Apple Music, including the AirPods Max. “Lossless audio is not supported on AirPods, any model,” an Apple rep told The Verge in an email. Agreed, the AirPods and AirPods Pro are aimed at delivering a truly wireless audio experience. The omission of the AirPods Max, Apple’s most expensive pair of headphones, is a bit strange. In the support document, Apple explains that current Bluetooth doesn’t support the higher quality format that ‌Apple Music‌ Lossless provides.

Notably, with the AirPods Max, Apple lets you plug in a Lightning cable with a 3.5mm connector to use it wired. AirPods Max will not support Lossless wirelessly, however, Apple says that using a cable, the $550 over-ear headphones will play back Lossless audio. While Apple supports the AAC codec over Bluetooth, you won’t get the same level of audio experience close to CD quality. What Apple needs is a new wireless codec that is equivalent to Sony’s LDAC, its audiophile-grade Bluetooth codec. That doesn’t exist, for now. Also, Apple will to offer a new AirPods model that supports the new codec.

Can I listen to lossless audio on my HomePod or HomePod mini?

HomePod and HomePod mini currently use AAC to ensure excellent audio quality. Support for lossless is coming in a future software update.

Long working hours are a killer, WHO study shows