[How to enable] WhatsApp dark mode comes to your Android phone, iPhone

Today we will explain how to enable WhatsApp dark mode on Android phone and also an iPhone. We will also talk about the supported devices for dark mode. Yes, you read that right not all phones will get dark mode. Read to know the details. 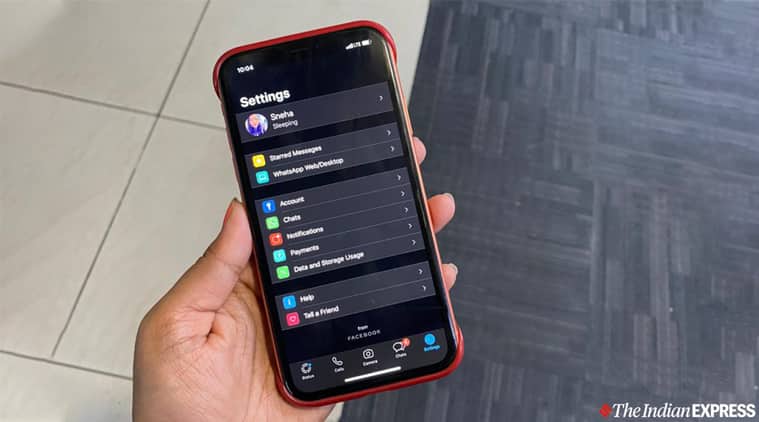 WhatsApp dark mode available for Android and iPhone users. Here are the details.

WhatsApp dark mode feature has finally arrived to users around the world. The feature is rolling out to both Android and iPhone users. However, the Facebook messaging platform confirmed that the update will reach users in a phased manner and given that some users might have to wait for the dark mode update to reach them. To check for the update Android users can head to Google Play store while Apple users can check the App store.

We have used the new WhatsApp dark mode feature on both Android as well as iPhone. Today we will explain how to enable WhatsApp dark mode on Android phone and also an iPhone. We will also talk about the supported devices for dark mode. Yes, you read that right not all phones will get dark mode. Read to know the details.

First, the users with smartphones running on Android 10 can head to the Google Play store and update the application first. If you haven’t received the update yet wait for it. WhatsApp said that the roll out is happening in a phased manner. For users you can see an “Update” option next to the app click on it. Ensure to connect your phone to a WiFi network before installing the update.

You can then head to the phone Settings options, scroll down to Display & Brightness option, and tap of dark mode. For phones running on Android 10 and iOS 13, this is a system wide update, meaning there is no separate setting in WhatsApp to turn on dark Mode. If your system setting is at dark Mode, then WhatsApp will also switch to that mode. 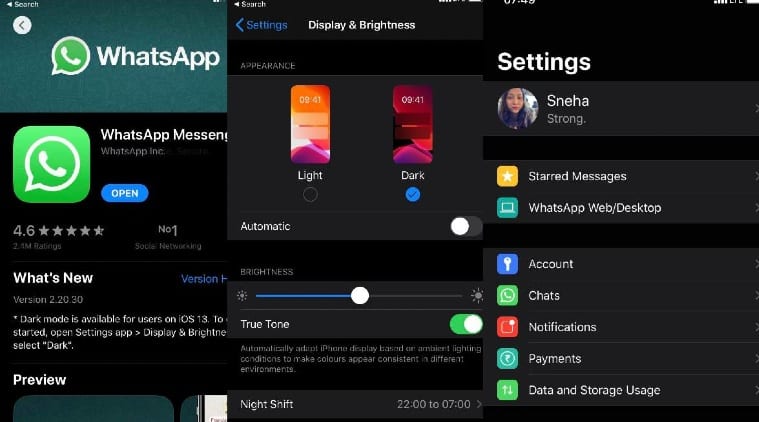 Here’s how to enable WhatsApp dark mode on iPhone and Android.

For users with phones running on Android 9 and below, they have a different option. They can go into WhatsApp Settings > Chats > Theme > select ‘Dark’ option. This process should be followed after the app has been updated in the Play store. Restart the app, and you will see the Dark them has been applied.

All iPhones running on iOS 13 will get this update.

Similar to Android, iPhone users should also head to the App store first, and update the WhatsApp app.

After installing, the update you should head to the phone Settings options.

Scroll down to Display & Brightness option, and tap on dark mode.

Read in Malayalam | Read in Bengali | Read in Tamil

WhatsApp has confirmed that the dark mode feature will come to all iPhones running on iOS 13 software version. This means alongside the latest iPhones such as iPhone X series, iPhone 8 series some of the old ones like the iPhone 7 series iPhone 6 series, and also iPhone SE will also get the update. Interestingly, unlike iOS the latest WhatsApp feature will be available for all Android phone users, of course including phones running Android 10 and Android 9.

WhatsApp dark mode: How is it useful?

Apart from improving readability, WhatsApp’s dark mode is said to ensure the most important information stands out using a combination of colours and other design elements. The messaging app said it has used colours that are closer to system defaults on iPhone and Android respectively, which helped it choose colours that will minimise eye fatigue.

WhatsApp said in a blog post that the “most requested” dark mode is now rolling out to WhatsApp users across the globe, finally. dark mode essentially reduces strain on eyes, especially in low light environments as the setting reduces the amount of light emitted by devices. Another advantage is it helps save battery on smartphones.

“During testing we found that combining pure black and white creates high contrast that can lead to eye fatigue. So instead, you’ll notice a special dark gray background and off-white color that lowers the brightness of the screen, cuts down the glare, and improves contrast and readability,” Whatsapp’s post reads.