PM Narendra Modi second only to Obama with 25 million followers on FB, 8 mn on twitter 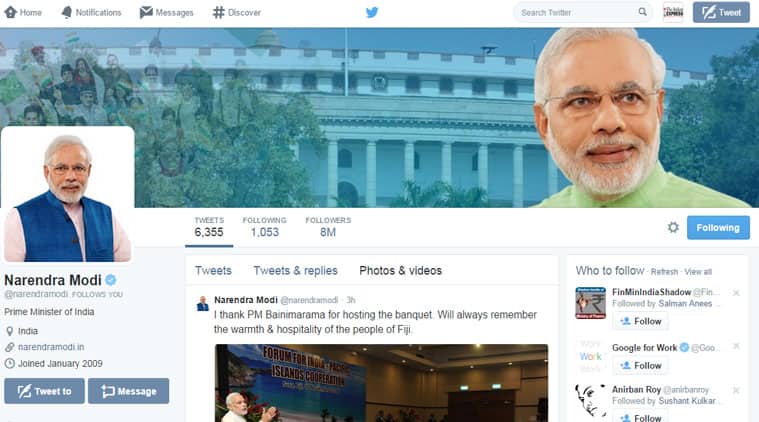 Prime Minister Narendra Modi (@narendramodi) on Wednesday crossed the 8 million followers mark on Twitter. He continued his presence on social media platforms as he became the first Prime Minister across the world to take a Twitter Mirror on tour with him. During his visit to Australia, he tweeted using the tool with the Australian Prime Minister Tony Abbott as well as students from Queensland University of Technology.

Modi has also crossed the 25 million mark on Facebook. He has 25,011,594 followers on Facebook and is the second most popular leader after US President Barack Obama.

A Twitter Mirror is a backstage ‘photo-booth’ for behind-the-scenes and exclusive moments involving celebrities and influencers for live events.

The PM and his friends at QUT. pic.twitter.com/aa1LgP2zlO

PM Modi essentially uses Twitter or Twitter Mirror to connect with Indians, at home and overseas, and underlines the relevance of digital diplomacy in today’s world.

Since his election win in May earlier this year, the Prime Minister’s Twitter account has doubled in followers adding more than 4 million followers.

However, US President Barack Obama and Pope Francis still remain ahead of PM Modi as most followed political or religious leaders globally with over 43 million and 14 million followers respectively.