Love in the Time of Tinder

Service providers and information aggregators mine our information and share it in ways that we cannot imagine. Service providers and information aggregators mine our information and share it in ways that we cannot imagine.

Last week, I met somebody who narrated their digital fairy tale to me. He was waiting in between trains, waiting at a train station, for the connection to arrive. Bored, he opened the dating app Tinder. He swiped right. There was a match. They started chatting. The conversation became interesting. She offered to leave work early and come to the train station to meet him for coffee. They had a five-hour long date. He missed many connections and stayed back with her to spend more time. When he left, they stayed connected using all the digital apps of connection that you can imagine. They started travelling weekends to be with each other. Three years later, he moved countries and jobs to be in the same city as her. Last week, they got engaged to be married. And everybody raised a toast to the resilience of their love, and how they have worked hard at being together. They thanked all the people who have been involved and supportive in helping them through this period. And at the end, she said, she wanted to thank Tinder and WhatsApp, without which they would have never met been able to continue this connection. They were being facetious, but they were also reminding us that we live in appified times.

Apps are everywhere and they have become so natural and ubiquitous that we have forgotten what it means to live without them. In the case of this fairy tale couple, their very meeting was ordained not by fate and destiny and romantic godmothers, but by a smart app. This app, based on algorithms that judged them to be a good match, drawing from what they like on Facebook and what they share with their friends, presented both of them to each other, causing the first swipe. The app, designed around the principle of FOMO (Fear Of Missing Out), made sure that in the 40 minutes that he was at the train station, both of them looked at their phones, swiped right and had the conversation that began it all. The app created habits that ensured that they trusted each other to meet after a 20-minute chat, to miss trains for the joy of the first extended date. People fell in love, and their love was managed entirely by smart apps.

These apps are designed to assist us in our mundane lives. Behind their seductive design and intuitive interfaces are scripts, norms, rules, protocols and intentions that are influenced and shaped by corporations and individuals, who have a specific interest in expanding their market domains. The creation of profiles on Tinder required both these people to give Tinder access to a wide variety of their personal activities and profiles. As their romance progressed, they involved more apps in their activities. Personal planners, reminders, e-shopping platforms, social media testimonies, deals to buy cheap tickets — all came into play. And even as they came together in a monogamous relationship, the apps encouraged them into data infidelity, wantonly sharing their data, making it speak with strangers, interact with unknown shadows in the dark, morphing and fusing with predatory algorithms that continued to not only follow them but also predict what their needs are. These smart apps might come with friendly interfaces and helpful suggestions, but they do it by making us transparent — they mine our information and distribute and share it in ways that we cannot imagine to ends that we cannot fathom.

As the apps become a daily part of our lives, holding our hands and comforting our souls, it is good to remember that behind the apps is a pipeline of service providers, data harvesters, information aggregators, who are learning more and more about us, and then without our consent, in the guise of being helpful, are sharing those secrets with things and people we do not know.

While they do help us celebrate the moments and make beautiful human connections, they also continue to make oily suggestions and innuendos, gently guiding us into buying more and consuming more. I came home from the engagement party and woke up the next morning with my face being tagged in about 30 pictures on four different social media apps. And each app suggested different things I can do to celebrate this event — buy a new suit for the wedding, buy an engagement gift for the happy couple, get help with planning a bachelor’s party, and get the services of a wedding planning app. 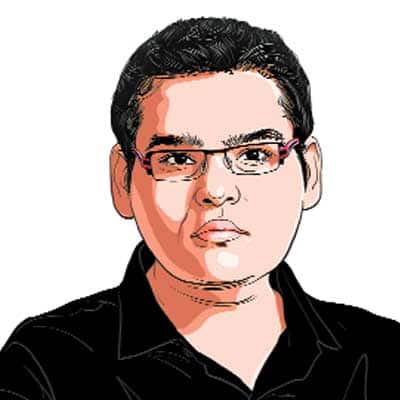