How Reels is driving big success for Instagram with short videos

Instagram was struggling against TikTok in India till 2019. But come 2020, Instagram and Reels have emerged as the big winner in the Indian market. 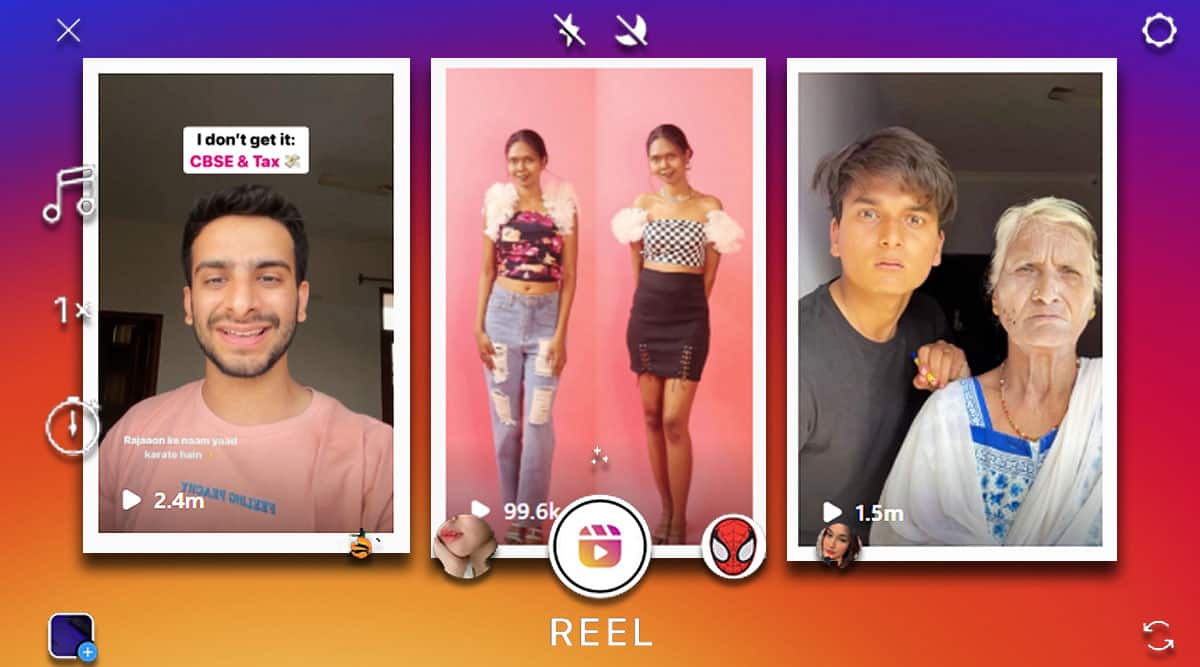 Instagram's Reels format is driving much of its success in India. In this image, Reels by creators (L to R) Vishnu Kaushal, Vaishnavi Nalbalwar and Naveen Singh. (Image created by Abhishek Mitra/Indian Express)

In 2019, then Facebook CEO Mark Zuckerberg made an admission: TikTok, the short video platform, was “past Instagram now in India in terms of scale”. While TikTok was already close to 120 million users at the time, Instagram’s India growth was not matching up. But in just three years, with TikTok no longer in the race, the picture is entirely different.

Instagram has been the big winner in the Indian market post the TikTok ban in June 2020. Its growth has largely been driven by Reels, a video format that the company introduced in August 2020 after the TikTok exit. The spate of Indian platforms that stepped in post the ban, seem to have all slipped against the might of Instagram.

According to Sensor Tower’s app analytics, Instagram downloads in India stood at close to 219 million in 2021 leading the social media category. In 2020, the downloads were at 137 million. In contrast, MX TakTak Player had 181 million downloads in 2021 and was the number two player. Incidentally, the app has been bought out by ShareChat’s Moj, another short video platform.

Data.AI (formerly AppAnnie) had noted in its State of Mobile 2022 report that both Facebook and Instagram saw their engagement deepen by 15 per cent and 35 per cent respectively in the Indian market. Further, Instagram also led the market in terms of downloads in the social category, according to the same report. And this growth has largely been driven by Reels, its fastest-growing content format by far, according to company executives. “Reels is the biggest contributor to engagement growth on Instagram and it’s growing very quickly on Facebook too. We’ve seen numerous examples of people growing by over 100 to a 1000%. @superstar_dewasi99 aka Rupa Ram, from Pali, Rajasthan has grown by over 2500% since the launch of Reels. Many others like him have also leveraged Reels to grow and become part of the 25 Under 25 Instagrammers of India list that we released recently,” Manish Chopra, Director and Head of Partnerships, Facebook India (Meta) told indianexpress.com in an email interview. In fact, the company tested Reels on Facebook in India, before the feature was expanded globally.

When asked what content was doing well on the platform, he stressed that entertainment was the key, though it could be across any genre such as food or fashion or travel or even finance.

Chopra also explained that music was driving the Reels culture as well, and many times music from Indian artists make it to the top of global charts, of songs most shared on Reels. “The Tollywood movie, Pushpa, which was released in multiple languages, is a good example. It became the longest-running trend on Reels, spanning 6 months now. Approximately 12M+ reels have been made on it, via various audios, remixes, and AR effects in the past couple of months. Even the original audio of ‘Kacha Badam’, which was written by a peanut seller in Birbhum district of West Bengal, became an international trend with global creators participating in it,” Chopra pointed out.

Instagram’s push for Reels has also no doubt sparked serious growth for creators on the platforms. Influencers like Naveen Singh aka BihariLadka– who incidentally had close to 971k followers on TikTok– have seen their following rise to 1.4 million in just over two years. In fact, Singh told indianexpress.com that when he started focusing on Instagram, he had no clue about how the algorithm worked since he was mostly on TikTok.

Singh, who makes a range of videos, many of which often include his mother and grandmother, told indianexpress.com: “Initially a lot of my audience was from Bihar. But in the past two years, I’ve found users from abroad also such as Pakistan, Melbourne. Many of these users message me about my videos.”

Making a Reel — a max 60-second video — can sometimes take a whole day to figure out, especially if he has to shoot outside. And yes, there is that subtle pressure to make videos as well given how the format is now dominating the platform. “I post one video a day. Users do message “where I am if I’m okay” if I don’t post every day,” he said.

Singh underlines how regional content is starting to move ahead slowly. Instagram also says it has seen regional videos grow on the platform. Trends with regional music such as those from Rajasthan (Banna Re, Oji Re Diwaana), Haryana (Dus Don, Naam Tera), Telugu (Bullattu Bandi) are seeing millions of Reels being made on the platform in some cases. For instance, Dus Don, a song by a Haryanavi artist Dada Sandhu, has over 4 million Reels made to it. The subjects are varied ranging from men on motorcycles to a bride shooting in the air with a pistol to a pitbull just sitting and panting.

Vaishnavi Nalbalwar, runs the handle journey_towards_fashion, and has seen her followers grow in the past two years driven by Reels. (Image credit: Shruti Dhapola/Indian Express)

For some influencers, the stress on Reels has also meant that engagement on other regular posts has decreased. Pune-based fashion influencer Vaishnavi Nalbalwar (who runs the handle journey_towards_fashion) has seen her handle grow from under 10k to 60k followers. When she started posting videos on the platform, she used IGTV which was popular back in 2018 and focussed on longer format videos.

While Reels helped boost her growth, she admitted that the process requires a lot of creative thinking and effort. “But when I’m trying to show how to style a piece then it takes around six to seven hours to shoot, editing takes around 2-3 hours. I also need to plan the music, the outfit. Even in promoted Reels, it takes time and effort to think about how the brand needs to be promoted,” she said.

In fact, influencers are also clear that is because Reels they have got a lot of opportunities in the real world. According to Vishnu Kaushal — who makes comedy videos with this brother, often in Punjabi — who now has 741k followers, his content has really blown up in the past year.

For Kaushal, who initially edited longer format videos, the challenge is different in the short-form video, especially when it comes to comedy. “In short-form, the challenge is to set up a premise in under 3-4 seconds and then deliver the first punch line in another 2-3 seconds so that the viewer will want to watch till at least 15 seconds,” he explained. He too said that the pressure to create new videos is there with Reels given how much Instagram is pushing the format but felt that this is something that exists for all creators and is part of the job.

The audience has expanded for Kaushal as well. In fact, insights from Reels does impact creators, given they get feedback on a daily basis. “I’m in this position where people are expecting a certain kind of content from me, it’s almost like a golden cage. People are really appreciating what you’re doing. But they want you to do a certain kind of certain content,” he said, adding that while being Punjabi is a big part of him, he has also seen success with other tropes such as the school kids skit that he does with his brother.

In Kaushal’s view, they are the first generation experiencing this technological revolution to fully understand it. “A lot of creators that I talk to, are like, “Hey, I just feel like everything I’ve created doesn’t work anymore and I don’t know what to create.” These are different kinds of problems which I think our generation wasn’t trained in any sort of way to handle and I do think about it,” he said.

However, Chopra said the reason for Meta’s increased focus on the short-video format is because of the demand from the audience. “People want to create and consume more short-form video, and the adoption of Reels and other short-form video apps is a result of that. That said, we’re still focusing on other surfaces on our platforms too. Facebook Watch, for instance, is a growing and successful part of the Facebook App. More than 1.25 billion people globally spend at least one minute every month on Facebook Watch,” he added.

Meanwhile, Meta is getting ready to expand Reels to Facebook in over 150 countries. Chopra added that eventually, most Instagram Reels features will be available on Facebook, though he called it as still early days for Reels on the main Facebook app.

Russia and China ‘most likely’ behind state-sponsored cyber threats: Trellix