Mark Zuckerberg Congress testimony: Mark Zuckerberg will have to face some tough questions regarding user privacy, how Facebook handles user data and possibly whether the company failed to protect customers in light of the recent scandal.

Facebook CEO Mark Zuckerberg arrives to testify before a joint hearing of the Commerce and Judiciary Committees on Capitol Hill in Washington, Tuesday, April 10, 2018, about the use of Facebook data to target American voters in the 2016 election. (AP Photo/Pablo Martinez Monsivais)

Appearing before the US Congress in the light of the data privacy scandal, Facebook CEO Mark Zuckerberg took responsibility for the leaks which affected 87 million users. Zuckerberg in his statement said, “We didn’t do enough to keep fake news, foreign interference in elections, and hate speech away. We didn’t take a broad view of our responsibility & that was a big mistake. It was my mistake, and I am sorry. I started Facebook, I run it & I’m responsible for what happens.”

Zuckerberg accepting that it was a mistake that they believed Cambridge Analytica, he said that the firm illegally accessed the data. Responding to Zuckerberg’s comments, Cambridge Analytica tweeted, We did not hack Facebook or break any laws – SCL Elections licensed data from a research company called GSR which obtained the data via a tool provided by Facebook, a common practice at the time.” Facebook CEO Mark Zuckerberg will have to face some tough questions regarding user privacy, how Facebook handles user data and possibly whether the company failed to protect customers in light of the recent scandal.

The Facebook CEO during his testimony said, they do not sell data at all at advertisers. He also said that the idea of paid, ad-free Facebook was not yet possible. Facebook never sells individual data to advertisers, is what Mark Zuckerberg said.  ""We think offering an ad-supported service is the most aligned with our mission of trying to help connect everyone in the world, because we want to offer a free service that everyone can afford," he said. Read more on this here.

Zuckerberg says Facebook does not mine phone audio for data to target ads. He calls the idea a "conspiracy theory." The Congressional hearing comes to an end. The second hearing will take place on Thursday.

Our position is not that regulation is bad, Mark Zuckerberg supports Congressional push for legislation and regulation of tech companies like Facebook.

Zuckerberg says Facebook would not 'proactively' cooperate with Trump administration's extreme vetting of immigrants. The company cooperates with the government only if a threat of harm is imminent or if legally required to do so.

Zuckerberg says Chinese internet companies are a strategic and competitive threat to the US. and tougher regulation could make it harder for smaller companies to get started.

Legislation to cover consent of users

Mark Zuckerberg support opt-in legislation that permission is acquired before sharing information, as a standard for the United States and says it's the right principle.

Amid his testimony, Zuckerberg's fortune has risen $2.7 billion today to $67 billion, according to the Bloomberg Billionaires Index https://t.co/sg7YMxFDer pic.twitter.com/g2o4w30FP3

20,000 people within facebook to work on security review through AI tools by the end of the year, says Mark Zuckerberg on the creation of fake profiles, active bots and Russian influence.

Mark Zuckerberg assure senators that the company does not look into the messages of WhatsApp, it's encrypted and same goes for Instagram and Facebook Messenger.

Not sure about foreign players in political ads

Zuckerberg says Facebook would not know if foreign nationals run political ads through US shell corporations.

While Zuckerberg said that they had no relation with Cambridge Analytica in 2015, the firm says that they acquired Facebook data in 2014 through a third party.

In 2014 we received Facebook data and derivatives of Facebook data from another company -- GSR -- that we engaged in good faith to legally supply data for research.

And they call me a criminal. https://t.co/cmpIxY3Cc3 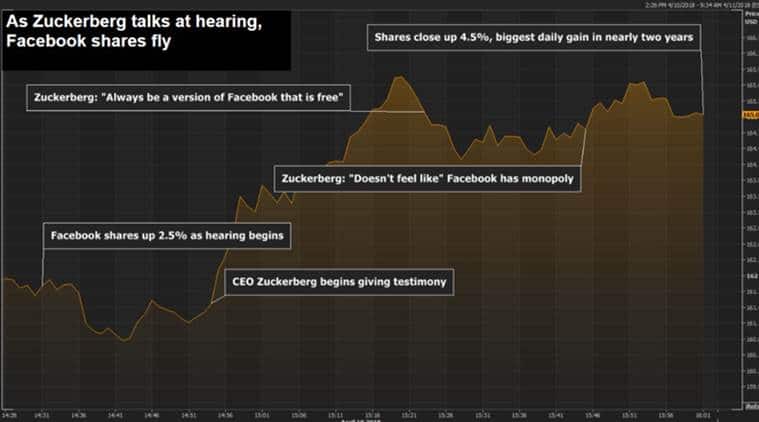 As part of our commitment to protect your data, we are launching the Data Abuse Bounty, a first of its kind: https://t.co/qOCnwMP8CX pic.twitter.com/SZEFcSQCNP

Facebook is a platform for ideas, we do not allow hate speech, nudity or terrorism on our platform among others, said Zuckerberg on Senator Ted Cruz's question whether the company is neutral or not.

Zuck: Our current motto is "move fast but stabilize infrastructure, which is a much less sexy mantra" than its predecessor, move fast and break things. Laughs ensue.

Zuckerberg said the world’s largest social-media company set out to do good but didn’t do enough to prevent its tools from being used for harm. READ HERE

Mark Zuckerberg says he has no specific knowledge that Cambridge Analytica data is being stored in Russia. Zuckerberg earlier had said that the firm illegally accessed the private data of users through a third party app.

Zuckerberg says of Facebook terms of service: 'I don't think that the average person likely reads that whole document'

Senator Leahy confronted Zuckerberg about calls for the death of a Muslim journalist in Myanmar not immediately being removed from Facebook. 'How can you dedicate and will you dedicate resources to make sure such hate speech is taken down in 24 hours?' Leahy asked. Zuckerberg said Facebook is doing three things to work on this:
1. Hiring more Burmese language content filters2. Working with civil society in Myanmar to identity hate figures to remove accounts.3. Setting up a team to make product changes in Myanmar and other countries to prevent this from happening.