In the future, Gurdon said, it can be used to counter neurogenerative disorders like Parkinson’s. 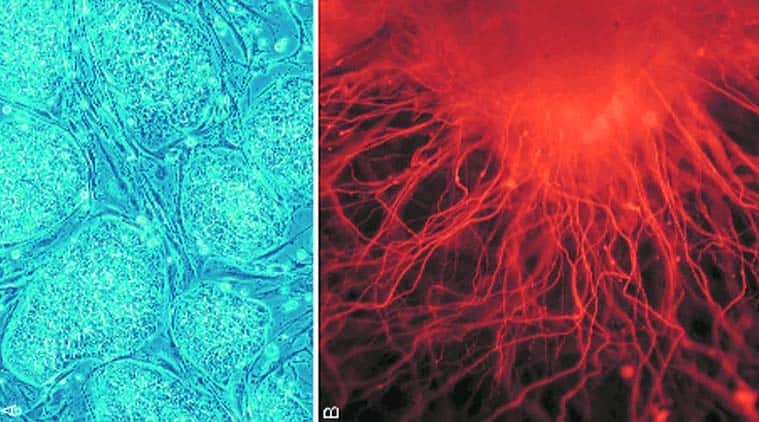 (Left) Stem cells that are not yet differentiated; nerve cells after differentiation, ready to perform specialised functions

When he cloned a frog as a student in the UK in 1962, John B Gurdon, now 82, had not been expecting the emergence of something useful for humans. The ‘Grandfather of Cloning’ has a different opinion now.

When Gurdon became the first man to clone an animal by manipulating the skin cells of an adult frog into an egg stripped of its nucleus, he did not expect to lay the foundation for research which holds out the promise of tissue immortality to prevent disorders such as blindness and Parkinson’s disease.

After a lifetime of work in trying to understand the mechanisms involved in how adult cells are reprogrammed by egg cells to become stem cells and new cells, Gurdon, a 2012 Nobel laureate along with Japanese biologist Shinya Yamanaka, is now sure that stem cell work has reached a stage to offer real solutions for humans.

“It was not clear all those years ago that it would be useful, but it is clear now that it has every prospect of being useful to humans. Now there is enormous hope for the future that many human disorders can be cured by cell-replacement process,” the veteran biologist said at the just-concluded Indian Science Congress in Mysuru. Among the disorders where cell replacement is ready to be tried is macular degeneration, a cause of blindness in the elderly.

In the future, Gurdon said, it can be used to counter neurogenerative disorders like Parkinson’s. “In my view view, it is the legal profession that is blocking this wonderful technique of cell replacement from being available to patients and I hope it will in time be approved and made available to people. As it is, people are going blind every day cause this technique is not available,” the professor said.

Damage to the retinal epithelium and photo receptor cells, he said, causes the blindness. “It is possible to make replacement cells from the skin and transplant them underneath the photo receptors. When this is done, I have shown in animals at least that it will rescue the loss of cells,” said the biologist.

In the case of neuro-degenerative diseases also, new solutions like stem cells are much needed and seem workable at the moment, he said. Between biologists such as Martin Evans, Ian Wilmut and Shinya Yamanaka — who have been involved in cloning and stem cell research since Gurdon first cloned a frog — it has been demonstrated that adult cells can be reprogrammed into their embryonic phase and further into new cell types.

“Cloning was the first time that cells were converted from one kind to another. That is very much the frontline of current work in the stem cell field,” he said.

“The famous Yamanaka procedure showed that you could go directly from skin to embryonic cells — which can form blood, pancreas and heart cells. The procedure pioneered by Yamanaka can be applied to humans,” Gurdon pointed out.

The prospect of using stem cells for preventing blindness from macular degeneration in elderly people is brightest, because treatment of the eye needs generation of only a small number of around 10,000 stem cells unlike the brain and heart where millions of cells need to be created.

He lamented present-day regulatory bodies “controlling everything”. “One must ask, should it be lawyers, priests, politicians or patients who are allowed to decide to have this kind of cell replacement treatment. I strongly support the view that it should be the patient who decides,” he said.

The man who was mocked in his youth for his ideas of becoming a scientist and sent into a classics program, has been a frequent visitor to India over the past five decades. “When I first came to India about 50 years ago, there were no schemes to support young scientists, but this (Science Congress) seems to be well established now and can be enormously beneficial in enabling those with real talent,” he said.