New research has shown that every galaxy has a supermassive black hole, that decides how stars will be formed, and when they will 'switch off'. 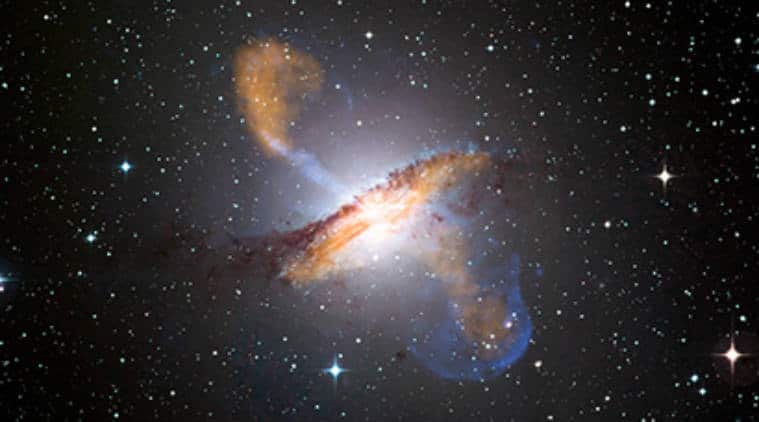 Astrophysicists have found that simulations of galaxy evolution must incorporate feedback from the black hole in order to reproduce the observed properties of galaxies. (Image Source: University of California, Santa Cruz)

Every large galaxy has a central supermassive black hole – a million times more massive than the Sun – which can decide when the process of star formation will be ‘switched off’, a study has found. Supermassive black holes reveal its presence through its gravitational effects on the galaxy’s stars and sometimes powering the energetic radiation from an active galactic nucleus (AGN).

The energy pouring into a galaxy from an active galactic nucleus is thought to turn off star formation by heating and dispelling the gas that would otherwise condense into stars. Astrophysicists have found that simulations of galaxy evolution must incorporate feedback from the black hole in order to reproduce the observed properties of galaxies.

However, observational evidence of a connection between supermassive black holes and star formation has been lacking, until now. “We’ve been dialing in the feedback to make the simulations work out, without really knowing how it happens,” said Jean Brodie, professor at University of California, Santa Cruz in the US.

“This is the first direct observational evidence where we can see the effect of the black hole on the star formation history of the galaxy,” said Brodie. The results reveal a continuous interplay between black hole activity and star formation throughout a galaxy’s life, affecting every generation of stars formed as the galaxy evolves.

The precise nature of the feedback from the black hole that quenches star formation remains uncertain, according to Aaron Romanowsky, an astronomer at San Jose State University in the US. “There are different ways a black hole can put energy out into the galaxy, and theorists have all kinds of ideas about how quenching happens, but there’s more work to be done to fit these new observations into the models,” Romanowsky said.

OnePlus Switch beta offers customised data migration, to be rolled out by mid-January