“Although (the launch) failed to achieve its objectives perfectly, it was an excellent accomplishment for a first launch,” South Korean President Moon Jae-in said in a televised speech. 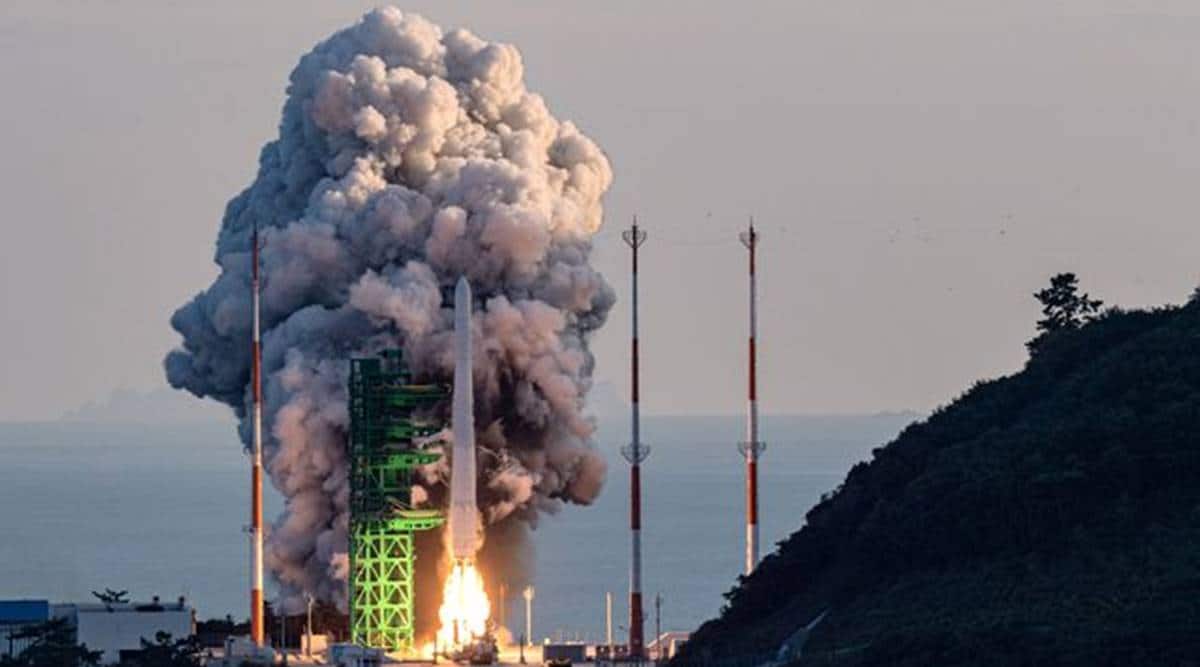 South Korean President Moon Jae-in, who observed the launch on-site, still described the test as an “excellent accomplishment” that takes the country a step further in its pursuit of a satellite launch program.

Live footage showed the 47-metre rocket soaring into the air with bright yellow flames shooting out of its engines following blastoff at Naro Space Center, the country’s lone spaceport, on a small island off its southern coast.

The moment the rocket engines roar hit us. pic.twitter.com/Bhw7Of3DIk

Lim Hye-sook, the country’s science minister, said Nuri’s first and second stages separated properly and that the third stage ejected the payload – a 1.5-ton block of stainless steel and aluminum – at 700 kilometres above Earth.

But she said launch data suggested that the third stage’s engine burned out early after 475 seconds, about 50 seconds shorter than planned, failing to provide the payload with enough speed to stabilize in orbit.

Officials from the Korea Aerospace Research Institute, the country’s space agency, said debris from the payload would have landed somewhere in waters south of Australia. The institute was planning to form an inspection committee soon to analyze what went wrong and map out adjustments before the rocket’s next test launch.

The launch, which took place at 5 p.m. (0800 GMT), had been delayed by an hour because engineers needed more time to examine the rocket’s valves. There had also been concerns that strong winds and other conditions would pose challenges for a successful launch.

“Although (the launch) failed to achieve its objectives perfectly, it was an excellent accomplishment for a first launch,” Moon said in a televised speech. “The separations of the rockets, fairings (covering the payload) and the dummy satellite worked smoothly. All this was done based on technology that is completely ours.”

After relying on other countries to launch its satellites since the early 1990s, South Korea is now trying to become the 10th nation to send a satellite into space with its own technology.

Officials say such an ability would be crucial for the country’s space ambitions, which include plans for sending more advanced communications satellites and acquiring its own military intelligence satellites. The country is also hoping to send a probe to the moon by 2030.

Nuri is the country’s first space launch vehicle built entirely with domestic technology. The three-stage rocket is powered by five 75-ton class rocket engines placed in its first and second stages. It is designed to deliver a 1.5-ton payload into orbit 600 to 800 kilometers (372 to 497 miles) above Earth.

“The launch left some frustration, but it’s meaningful that we confirmed we have obtained core technology” for space launches, said Lim, the minister.

Scientists and engineers at KARI plan to test Nuri several more times, including conducting another launch with a dummy device in May 2022, before trying with a real satellite.

South Korea had previously launched a space launch vehicle from the Naro spaceport in 2013, which was a two-stage rocket built mainly with Russian technology. That launch came after years of delays and consecutive failures. The rocket, named Naro, reached the desired altitude during its first test in 2009 but failed to eject a satellite into orbit, and then exploded shortly after takeoff during its second test in 2010.

While Nuri is powered by liquid propellants that need to be fueled shortly before launch, the South Koreans plan to develop a solid-fuel space launch rocket by 2024, which could be cheaper to build and prepared for launch more quickly. Such rockets would also be ideal for more sensitive space launches, including those involving military intelligence satellites.

South Korea’s space ambitions received a boost in recent years as the Trump and Biden administrations took steps to ease decades-long U.S. restrictions that capped Seoul’s missile development before eventually allowing its ally to build conventional weapons with unlimited range and warhead weight. In easing the so-called missile guidelines, the U.S. also removed a limit on how powerful South Korea’s solid-fuel rockets can be for space launch purposes.