Solar Eclipse (Surya Grahan) 2021 Date, Timings Today Live Updates: The annular solar eclipse will happen when the moon will block the sunlight and cast a shadow over Earth.

Eclipse 2021 Today Live Updates: The first solar eclipse of this year will appear today starting at 1.42 pm, but it will not be visible in India. So, get ready to witness the ‘Ring of Fire’ as it will also be partially visible from some parts of India. Those who are based in Ladakh and Arunachal Pradesh will be able to see this rare astronomical phenomenon. They will start witnessing the solar eclipse at 12:25, as per the map published by NASA.

Read more | Lunar eclipse today on November 19: Timings, is it visible in India, and everything to know

The 2021 annular solar eclipse event will appear at 01:42 PM (IST) and will last until 6.41 pm IST in most of the areas. The duration of this solar eclipse at Greatest Eclipse is said to be around 3 minute and 51 seconds.

A partial solar eclipse is seen above the horizon in Avon-by-the-Sea, New Jersey, US, June 10, 2021, in this picture obtained from social media. (Source: Collin Gross/via Reuters) A man uses a monocular to cast a reflection of a partial solar eclipse on a paper in Ronda, southern Spain, June 10, 2021. (Source: REUTERS/Jon Nazca) A bird is silhouetted against the sun as the moon blocks part of the sun during a partial solar eclipse in St. Petersburg, Russia, Thursday, June 10, 2021. (Source: AP Photo/Dmitri Lovetsky) 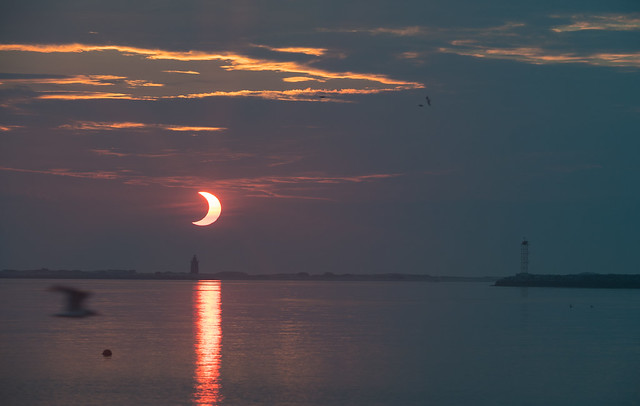 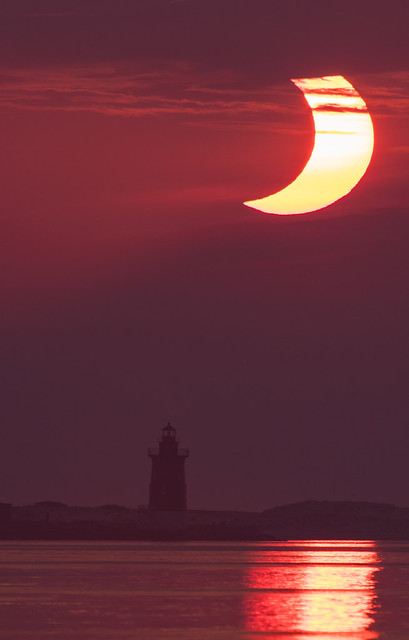 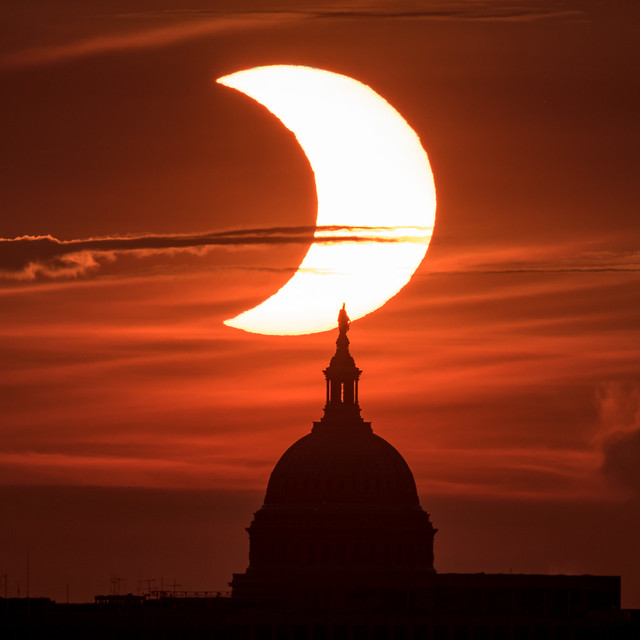 The annular solar eclipse is now visible from Russia, USA, Canada, and other places If you are using your mobile phone, then you need to put eclipse glasses over the smartphone’s camera lens. If you have a DSLR, then avoid looking through a camera’s optical viewfinder and use the LCD screen.

Asus adds 6 new enterprise-focused laptops to its ExpertBook lineup
Here are the best streaming devices you can buy in 2022
Xiaomi 13 series launch delayed: Here’s what we know so far
Michael Kors launches Camille Gen 6 smartwatch in India
Scientists simulated wormhole using a supercomputer for the first time ever
More from Technology >>
Solar Eclipse to begin in 15 minutes

Looking at the Sun directly can cause permanent damage to the retina so it is recommended to use special goggles, a welder’s shield, or a pin-hole imaging technique to see the solar eclipse.

The image of the sun can be put up on a sheet of white paper using a pair of binoculars pointed at the Sun. Do not use ordinary goggles, as they are not dark enough and are made to cut only the terrestrial light. Also, do not use a glass surface covered with lampblack or carbon soot as it is not safe.

It is not safe to look at any solar eclipse directly; annular, partial or total. NASA that those who are viewing a solar eclipse should wear "solar viewing or eclipse glasses" throughout the entire eclipse, especially if one wants to face the sun. These glasses are not the same as your regular sunglasses. For those who do not have glasses, NASA says they should try "an alternate indirect method, such as a pinhole projector," but one should not use these to look directly at the sun.

Solar eclipse 2021: Where all is it visible?

The annular eclipse will be visible in parts of Canada, Greenland, and northern Russia. So people living in these areas will see the ring of fire.

During this solar eclipse, the Moon will block off around 70 per cent of the Sun. The ring of fire will not be seen constantly. It will only be seen when the eclipse is at its peak. Before and after that you will only be able to see a crescent shape Sun.

NASA says hundreds of years ago when people observed the Moon during an eclipse, they saw Earth’s shadow on the Moon and discovered that the Earth is round. “Even after all these years, scientists are still learning about the Moon from lunar eclipses, NASA said.

Scientists also use solar eclipses as an opportunity to study the Sun’s corona, which is basically the Sun’s top layer. During an annular solar eclipse, NASA uses “ground and space instruments to view the corona when the Moon blocks the Sun’s glare.”

When the Moon is near its farthest point from the Earth, called apogee, its relative size fails to completely block the Sun and leaves the outer rims visible. It creates a 'Ring of Fire' in the sky.

When the Sun, the Earth, and the Moon align in a straight line, we witness either a solar eclipse or a lunar eclipse depending on the position of the three bodies relative to each other. When the Moon moves between Earth and the Sun, it casts a shadow over Earth and blocks the light of the Sun from directly reaching the globe.

Based on the alignment and the relative distance between the three celestial bodies, there are three kinds of solar eclipses — total, partial, and annular. As already mentioned, today you will witness an annular solar eclipse.

What are the timings for the annular solar eclipse?

In most of the areas, the 2021 annular solar eclipse event will start at 01:42 PM (IST) and it will be at its peak at around 6.41 pm IST. The duration of the annular eclipse at Greatest Eclipse will be around 3 minute and 51 seconds. The map published by NASA suggests that those who are based in Ladakh and Arunachal Pradesh will start witnessing the solar eclipse at 12:25. They will be able to see a partial solar eclipse and this celestial event will last until 12:51 for them.

Get ready to witness the 'Ring of Fire' as it will also be partially visible from some parts of India. Those who are based in Ladakh and Arunachal Pradesh will be able to see this rare astronomical phenomenon.