Gene families - CIN-TCP and KNOX-II - encode proteins that suppress the formation of new leaflets at the margin, thereby giving rise to simple leaves. 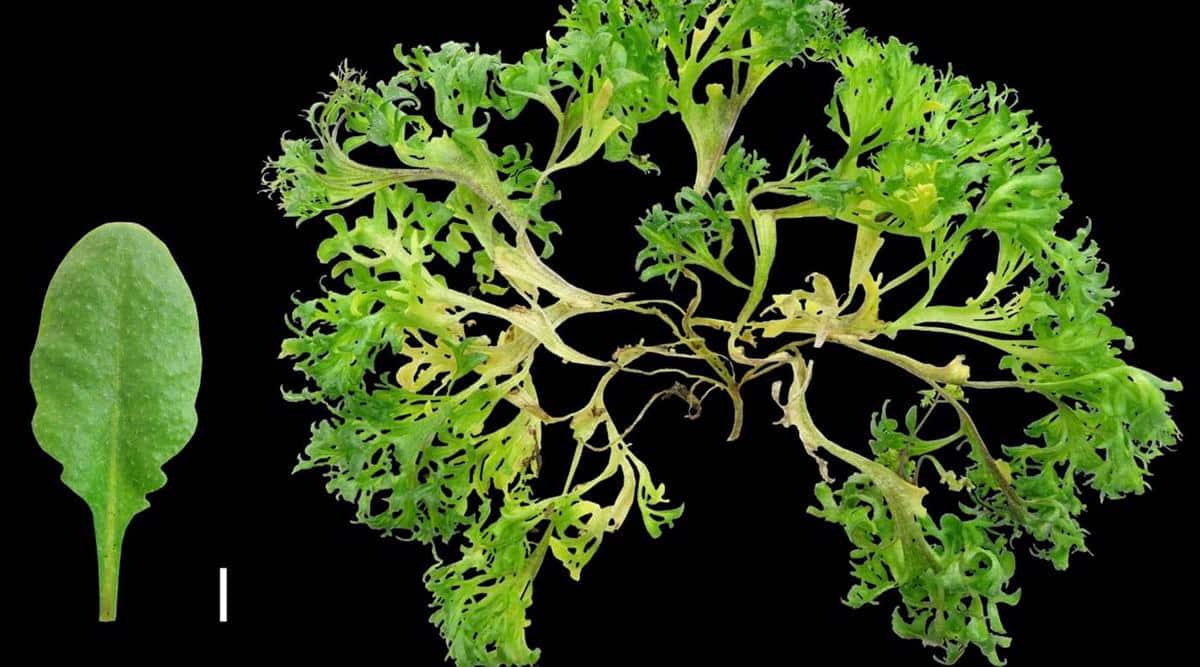 Co-lead author of the study Krishna Reddy Challa says, "One could use this technique to alter the shape of the salad leaves as one chooses, or increase their biomass." (Twitter/@Ki2_challa)

Researchers at the Indian Institute of Science (IISc) have shed light on how ‘simple’ leaves – one of the two basic forms of leaves – develop in a plant.

The team included researchers from the Department of Microbiology and Cell Biology (MCB) and their collaborators from Shodhaka Life Sciences, Bengaluru. Their study was published in Nature Plants.

Plants have either simple or compound leaves, it was noted. A mango tree, for instance, is said to possess simple leaves because they have a single, intact leaf blade. On the other hand, a gulmohar tree has compound leaves where the leaf blade is dissected into multiple leaflets. However, both simple and compound leaves start out as rod-like structures budding out from the meristem, the tip of the stem where stem cells are present.

How these rod-like structures, referred to as primordia, give rise to simple or compound leaves has been a subject of much investigation in the past years. In this study, the authors identified two gene families that regulate the development of simple leaves through the proteins they code for, in a plant called Arabidopsis thaliana – a popular model organism in plant biology, Bengaluru-based IISc said in a statement on Monday.

These gene families – CIN-TCP and KNOX-II – encode proteins called transcription factors that suppress the formation of new leaflets at the margin, thereby giving rise to simple leaves. The researchers simultaneously suppressed multiple members of the two gene families; this caused the simple leaves to become super-compound leaves that gave rise to leaflets indefinitely. However, when the authors independently suppressed either of the two gene families, the leaves did not turn into compound leaves, suggesting that the genes work in concert.

In addition, these mutant leaves continued to stay young and grow for as long as they had the necessary growing conditions, according to the statement. While Arabidopsis leaves typically mature in around 30 days and wither by 60 days, the leaves of these mutant plants with suppressed CIN-TCP and KNOX-II gene families grew for as long as the researchers followed them (175 days) – and could potentially go on for months or years given the necessary conditions.

“While scientists have been able to convert compound leaves to simple leaves by manipulating the expression of certain genes, our report is the first one to go the other way around,” Utpal Nath, Associate Professor at MCB and senior author of the paper, said.

The researchers also found that the leaves of the plants in which the two gene families were suppressed, in contrast to normal Arabidopsis leaves, displayed RNA signatures of young immature leaves and actively dividing cells even beyond their typical maturation period. RNA is a chemical messenger which carries instructions from the genes required to synthesise proteins.

Besides providing insights into plant development, in the long run, the findings could initiate and nurture innovations in the food industry, the statement said. As Krishna Reddy Challa, a former PhD student at MCB and co-lead author of the study, says, “one could use this technique to alter the shape of the salad leaves as one chooses, or increase their biomass. For instance, you could change the shape of a spinach leaf to look like lettuce.”

“Since the leaves don’t mature once the CIN-TCP and KNOX-II genes are suppressed, you can control the longevity of the plant and thereby extend its shelf-life,” adds Monalisha Rath, a PhD student at MCB and co-lead author of the study.

Outside Afghanistan embassy in Delhi, fear and uncertainty: ‘Fled from Taliban 5 years ago, we know what they can do’