Shelling out Rs 1.8 crore for trip, but it’s truly worth it: Man who could be India’s first space tourist

Kerala-based media entrepreneur and travel chronicler Santhosh George Kulangara is set to fulfil his dream of travelling to space as part of Richard Branson's Virgin Galactic mission, rejuvenated after a few hiccups along the way. Kulangara was the first Indian to be selected to join the team as a paid tourist way back in 2007. 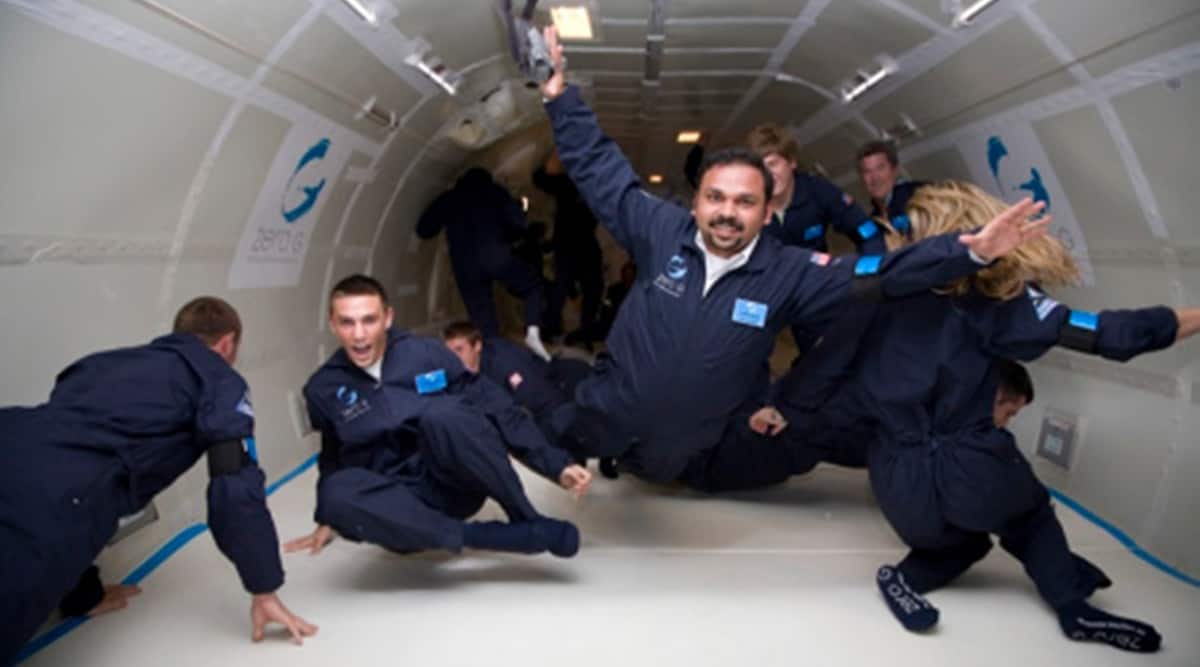 Santhosh George Kulanagra has travelled to 130 countries and produced more than 1500 episodes of his visual travelogue.

As billionaires Jeff Bezos and Richard Branson went on suborbital space flights with their respective companies recently, space tourism has become the buzzword all of a sudden. For Santhosh George Kulangara, who was the first Indian to be selected by Branson’s Virgin Galactic as a paid space tourist as early as 2007, the long-cherished dream of space travel seems just a few months away. The Kerala-based solo-traveller and entrepreneur is the founder of Safari TV, a unique channel dedicated to travel and exploration, and now a part-time member of the Kerala State Planning Board.

As Kulangara gears up for the historic space travel — Virgin is yet to confirm when he will take to space and if more training is needed for the same — unlike any of the trips to more than 130 countries he has visited, indianexpress.com caught up with the 49-year-old to talk space, life, and the world around us in an extensive interview.

Space tourism is purely a futuristic business. This can become the next big thing for humans. Why did Spaniards sail to Latin America all those centuries ago? The French to Africa? The British to India? Europe is this rich because the people there were adventurous and went to other lands and conquered them. Like that, space tourism is an investment for the future. We should think about a future when the resources on planet earth are no more enough to sustain all the human beings here. If there is a company experienced in travelling to space and other planets and capable of doing explorations, wouldn’t they stand to benefit from that situation? I foresee colonisation of other planets and initiatives such as space tourism are just means to that end.

Can you elaborate on how you came across this space tour project and how you became part of it?

I was travelling on a train in the UK in 2005 and happened to see an ad in a newspaper left by another passenger. It said Richard Branson was inviting people to join his company’s space tour. I already knew about Branson and had huge admiration for him. I was immediately interested. I took that newspaper with me and after returning home, sent a mail to Branson’s company. I told them of my background that I am someone who does travel documentaries. There were a few telephonic interviews and even they seemed to be happy to have a mediaperson with them. But there were some bureaucratic hurdles as I needed the Indian government’s permission to join the trip to space. Finally, I was officially enrolled as the first space tourist from India in 2007.

What was the reaction of people back then? With so many hiccups along the way, did you also doubt at some point whether it would materialise or not? 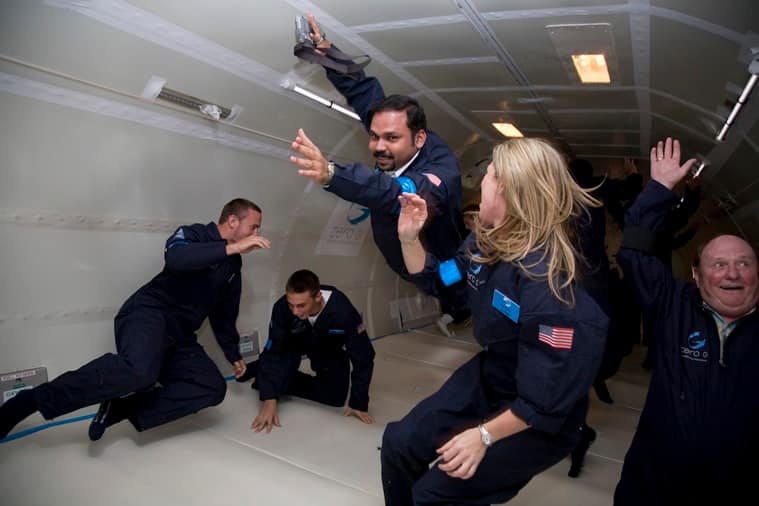 Santhosh George Kulangara during a zero-gravity training a few years ago.

To be fair, not many believed it was possible when I joined the space tourism project in 2007. Even media persons would say this was a non-starter. But now, a generation has changed and the youngsters of today, who are more knowledgeable about technological advancements, know these things are possible. I, though, have always believed it would happen despite the hiccups. I think within a year from now, we will fly to space. It will be an answer to people who ridiculed us saying it was impossible.

Yes. This will be the most expensive journey for me till now. I’m shelling out $ .25 million ( Rs 1.8 crore approx) for the trip besides training costs and other expenses. It might seem like a huge amount. But worth it for the experience and the historical significance. I know I’m going to become the first Indian space tourist. Isn’t that enough incentive? When I was at the Kennedy Space Center in the United States undergoing the training, I felt like I had reached the top of the world. The get-togethers involving celebrities like Arnold Schwarzenegger and Leonardo DiCaprio at the Mojave desert, getting to know personalities like Richard Branson, you pay for these experiences. Many spend this much money to buy houses right? It’s not a huge amount. It’s all about one’s perspective. If I had thought like everyone else, I would not have been able to do even one episode of Sancharam (his travel show which has crossed 1500 episodes).

How did the training programme for the tour go? Will you have to undergo another round of training given you completed the training nearly a decade ago?

I’m not sure whether we will have to undergo another round of training because the training was completed way back in 2011 or only do medical tests. The training was mostly to gauge whether we could withstand certain conditions the body would experience during the space trip. We had classroom learning before a special plane from Kennedy Space Center took us on a flight across the Atlantic Ocean. In the zero-gravity training, the aircraft would go in a parabolic shape and we would feel weightless for a few seconds. The G-tolerance training, on the other hand, was taxing as we would feel as if our weight has increased by six times over and all the liquid in our system is being sucked out. Fortunately, I managed to clear all such tests. 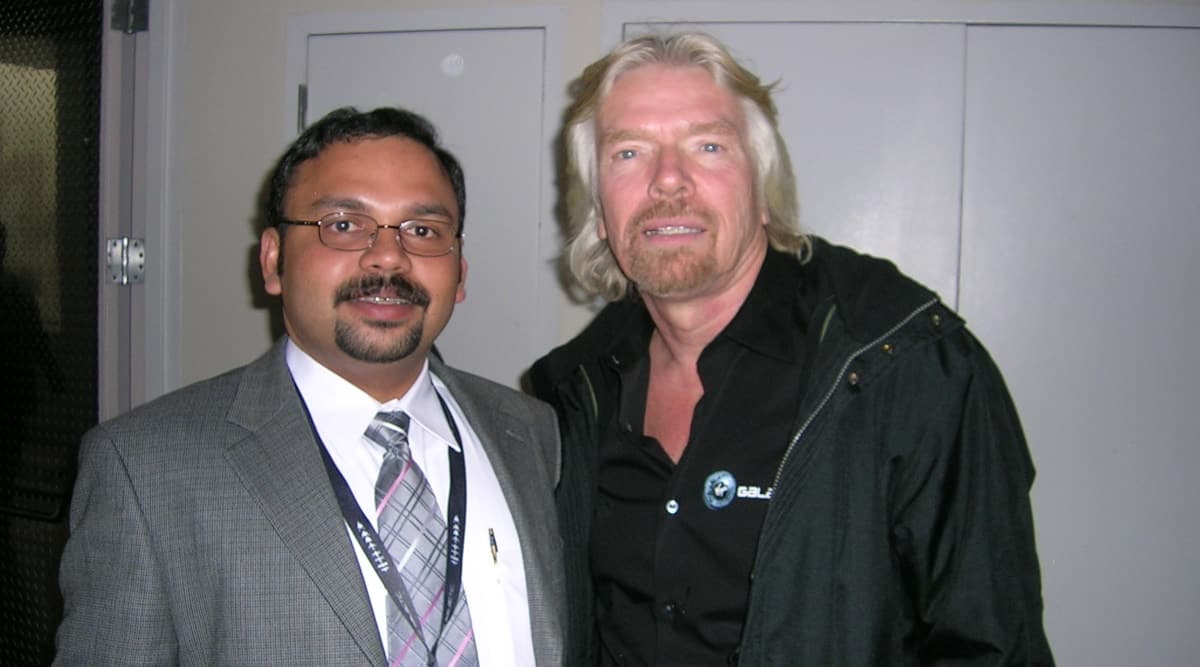 So was space the only place left for you given you have been to all continents?

To be honest, I haven’t travelled to every place on the globe. But since I have visited 130 countries, it will be difficult to have fresh, culturally shocking experiences now. I have a fairly good understanding of what to expect in terms of the geography, the people, cuisine and culture in most of the regions around the world.

Do you think travel is essential for a human being? And do we have an attitude that only the rich can afford to travel?

Yes, of course. Travel broadens our horizons. The problem with us is that we all live in a set pattern. Go to school and college, get a job, save money, marry, build a house, buy a car, get old, fall ill and die. Imagine we are going to Ooty. What do we gain if we just go there on a bus and return without exploring the place? Can we call that a fruitful journey? Most of us live our lives like that in our small little cocoons. This is where I find the westerners different from us Indians. They invest their money in life experiences. Not in banks. We should also have that realisation. Here, everyone is living for the next generation. No one is living for himself or herself. If you do proper planning, cost-effective travel is possible for people belonging to any economic category.

How did you develop an interest in travel and making travel documentaries?

My father used to run a parallel college at our village Marangattupally in Kerala’s Kottayam district. He used to conduct study tours for his students and my sisters and I used to tag along with the group during our school days. After every trip, my father would ask us questions about all that we encountered and made us write travelogues. So there was no other way but to note down every minute detail we saw and heard during our trips and it soon became second nature for me. That experience helped me nurture my style of taking and keeping notes of all the places I visit. In a way, I realised very early that travel is not a hindrance to your formal education, it is very much a huge part of it. Santhosh George Kulangara with the completion certificate of his training for space tourism.

The broadcast media took its sweet time to understand the value of your travelogues. Can you go through the early years of struggle?

Even though I used to help my father with Labour India (a publishing house of journals and magazines for students run by Kulangara’s family), my dream was to make travel documentaries. I used to edit college magazines for money for my travels. The first foreign country I visited was Nepal. Then I went to Maldives, Singapore and so on, and gradually covered all continents. I travel cheaply and shoot the visuals myself. If I spend Rs 1 lakh on a journey, I make sure that I shoot at least 25 episodes. Initially, I gave my programmes to multiple TV channels and everyone sat on them for years thinking what is special about travelogues by a 24-year-old. Finally, in 2001, Asianet started telecasting Sancharam and it became a huge success.

What are some of the countries you are yet to visit? And which country have you visited the most?

Amazon rainforests in South America are next on my bucket list. I have not been to countries like Saudi Arabia, Iran and North Korea. The countries I have visited most are America and China. I believe all Indians should go to China as tourists. When you think of China, you generally think of a borderline dictatorial regime. But tourism flourishes in China. Santhosh George Kulangara said he felt weightless for a few seconds during the zero-gravity training.

Have you had any scary experiences shooting from conflict-ridden countries?

I go to a country only after studying about it fully. First of all, I grasp the map of the places I want to go and make a mindmap of all things I want to do. I have travelled through Yemen during the crisis and shot visuals. If you are careful, nothing bad will happen to you. Also, I have needed only English to communicate in all my travels.

You seem to reject all sorts of regional exceptionalism, whether it’s the Indian or Kerala one…

We have to understand there are more beautiful places and better systems than ours in the world. When it comes to city planning and aesthetics, we are still stuck in the bygone era. Our cities are not aesthetically pleasing like the truly global ones. In Kerala, we are exceptional in certain things like education, health, social justice etc. But we have an attitude against industries that has cost us dearly.

Coming back to the space voyage, will you be shooting visuals of it as well?

Yes, I will. The only thing I insisted on before signing the contract with Virgin in 2007 was that I am allowed to shoot during the trip so that people back home will be able to watch the unique sights from our space travel.

India is one of the leading countries in space research. What chance does India have in space tourism?

ISRO is also observing these developments, I think. The ultimate aim should be to make people travel like in a passenger aircraft.

India pulls out of Mazar-e-Sharif, tells nationals to leave Afghanistan 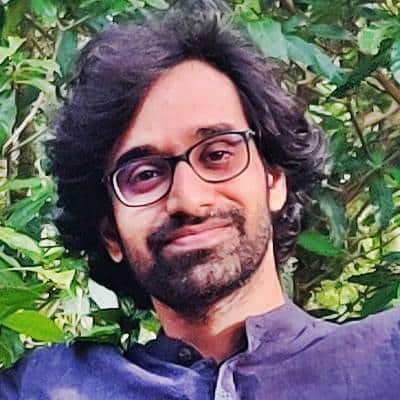 Narayanan SNarayanan S is a deputy copy editor based in Kochi. Follow him on Twit... read more