Weinstein’s drive for advancing telepathology included not only widening medicine’s reach but also bringing greater humanity to it. 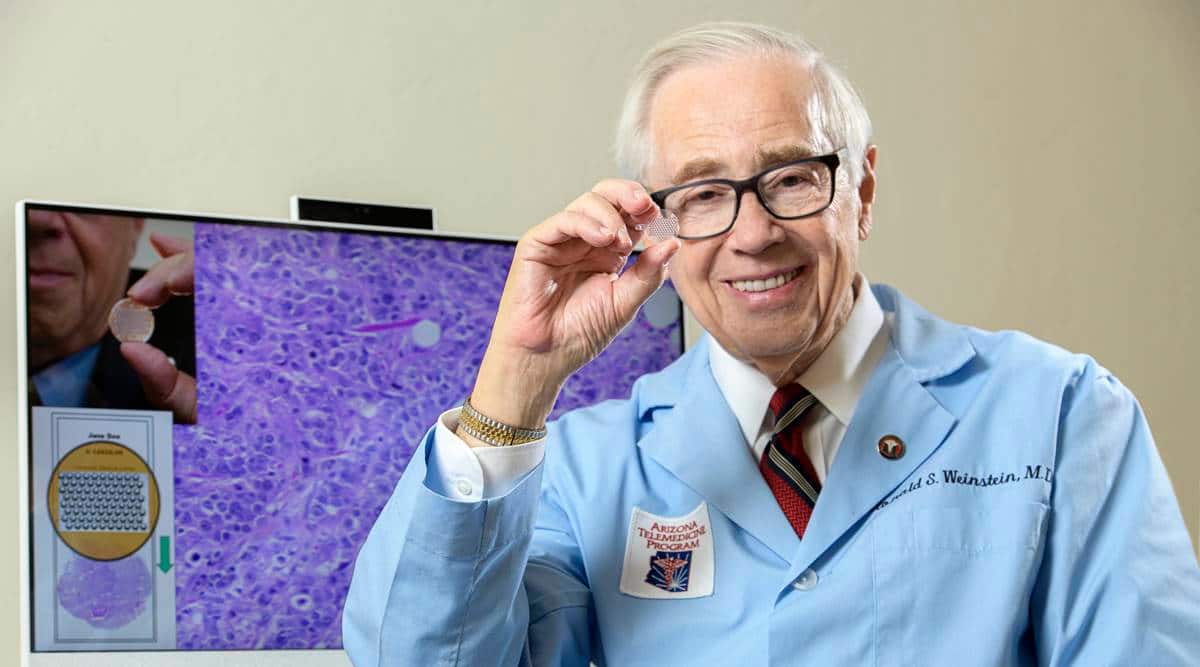 In August 1986, a doctor in Washington, DC, manipulating a microscope, examined a tissue sample from a breast-cancer patient and correctly diagnosed that her tumor had spread. What was unusual about the diagnosis was that the tissue sample and the microscope were half a country away, in El Paso, Texas.

It was a demonstration of a technology, now known as telepathology, which enables specialists to render diagnoses and other medical opinions from afar using various telecommunications technologies. At the time, the internet was in its early stages, fiber optics were not widely available and the high-definition screens now common were unknown. So for a doctor to remotely control a microscope and see a clear enough image to render a conclusion was a significant breakthrough.

The demonstration had been arranged by the founder of Corabi Telemetrics, Dr. Ronald Weinstein, who at the time was also chairman of the pathology department at Rush-Presbyterian-St. Luke’s Medical Center in Chicago and had led the team that perfected the technology. (In fact, he is credited with coining the term “telepathology.”) He spent the rest of his career furthering telemedicine of various kinds, first in Chicago and then, starting in 1990, at the University of Arizona College of Medicine in Tucson, where he was a founder of the widely admired Arizona Telemedicine Program.

Weinstein saw early on the potential for telepathology to broaden medical access.

“The limited availability of pathologists in some rural locations and areas serviced by federal medical centers is a bottleneck in the United States health care delivery system,” he wrote in the journal Human Pathology in May 1986, a few months before his groundbreaking demonstration.

By the time he died last month, his early vision of telemedicine’s possibilities had become an integral part of the health care system, not only in pathology but also in numerous other specialties. The Arizona Telemedicine Program, which he directed for 25 years, had “linked more than 160 sites in 70 communities, bringing clinical services — in some cases lifesaving — to hundreds of thousands of patients, many of whom live in Arizona’s medically underserved areas,” Dr. Michael M.I. Abecassis, dean of the College of Medicine, said in announcing Weinstein’s death to the University of Arizona community.

Weinstein’s wife, Mary (Corabi) Weinstein, said he died of heart failure Dec. 3 at a medical center in Tucson, Arizona. He was 83.

Ronald S Weinstein (the S did not stand for anything and carried no period) was born Nov. 20, 1938, in Schenectady, New York, to H. Edward and Shirley (Diamond) Weinstein.

He studied pre-med at Union College in Schenectady, but at his father’s urging took a course in government. He got the top grade and received a Ford Foundation summer fellowship working for Rep. Samuel Stratton of New York — “a transformational education for me,” as he put it in a 2019 Founders Day lecture at the Tucson college. The skills he learned then, he said, served him well all his life, especially in his efforts to bring in government funding for medical initiatives.

After earning a bachelor’s degree at Union College in 1960, he enrolled at Albany Medical College, attending from 1960-63 and also working for several summers at the Marine Biological Laboratory in Woods Hole, Massachusetts. In the 2019 lecture, he told the story of mistaking a rumpled older man for a janitor and asking him to empty the trash can, which the man did. A few minutes later, someone told him the “janitor” was actually Albert Szent-Gyorgyi, the Nobel Prize-winning biologist. He went to apologize, and the Nobelist became a friend and mentor.

He finished his medical education at Tufts University in 1965 and completed his residency at Massachusetts General Hospital, which at the time was experimenting with an early telemedicine program linking it by television camera to a clinic at Logan Airport in Boston. He was asked to look in on a few cases and, he said, “that stuck in my mind.”

In 1975 he became chairman of the pathology department at Rush-Presbyterian in Chicago, and 11 years later he was ready to introduce the idea of telepathology, founding Corabi Telemetrics, one of several companies he created or helped create to bring ideas developed in academia to market.

“Sears and Roebuck never intended to get into the financial business,” he said in a speech a few weeks before the 1986 demonstration of his new technology, referring to the retail giant’s expansion into banking at the time. “But somewhere along the line, engineers figured out how to put satellites in space and revolutionized the financial industry. And what I’m going to talk about today is how the very same changes are going to revolutionize the way that we practice medicine.”

Weinstein took his expertise to the University of Arizona in 1990, becoming head of the pathology department at the College of Medicine. By the mid-1990s telemedicine was well established, at least as a concept, and Bob Burns, a member of the Arizona House of Representatives who later became a state senator, had a computer programming background and took an interest in it, securing financing for a statewide initiative.

When the state asked the university to oversee the project, “they gave us the best man they had,” Burns said in a phone interview. That was Weinstein, who was named director when the program was initiated in 1996.

The project, Burns said, made a particular effort to bring medical expertise to remote areas, Indian reservations and prisons — and even abroad, to places like Panama.

Elizabeth A. Krupinski, a longtime colleague and collaborator now at Emory University, said Weinstein had both vision and people skills.

“He had a knack for identifying where and how aspects of health care process and outcomes could be improved, devising a potential solution, then finding the right people to work with to make that vision a reality,” she said by email. “That process always included bringing in people from a wide variety of backgrounds and perspectives to truly optimize the results, and to bring in trainees so they could be a part of the future.”

Weinstein’s drive for advancing telepathology included not only widening medicine’s reach but also bringing greater humanity to it. One effort he was involved with, at the Tucson Breast Center, enabled women to have a breast biopsy, get the results and consult with a specialist on the same day, eliminating what could be a long and stressful wait.

That was an issue that frequently came up during Weinstein’s time on the project. “The majority of phone calls I get are from women who want to know where their breast biopsy report is,” he told the journal Health Executive in 2007. “The terror in their voice is really moving.”

In addition to his wife, whom he married in 1964, Weinstein is survived by a daughter, Katherine Weinstein Miller; a son, John; and two grandchildren.