Oceans are getting louder, posing potential threats to marine life

Scientists and environmentalists are urging that more research be conducted, to learn much more about the effects of sound and ship traffic on the creatures of the sea. 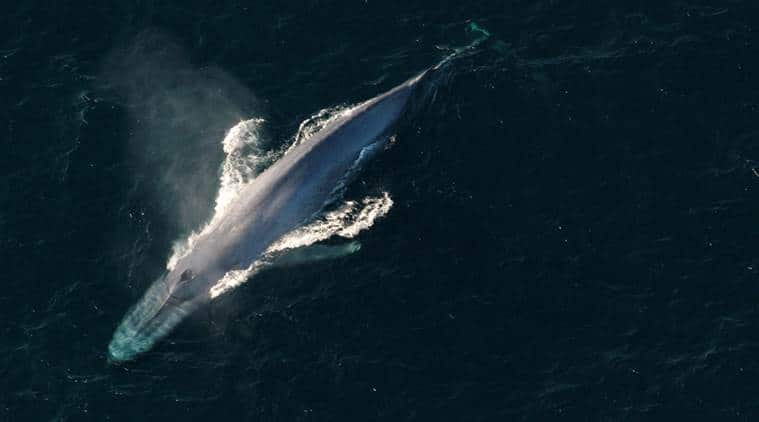 A blue whale surfaces to breathe in an undated picture from the U.S. National Oceanic and Atmospheric Administration (NOAA). (Reuters photo)

Slow-moving, hulking ships crisscross miles of ocean in a lawn mower pattern, wielding an array of 12 to 48 air guns blasting pressurized air repeatedly into the depths of the ocean.

The sound waves hit the sea floor, penetrating miles into it, and bounce back to the surface, where they are picked up by hydrophones. The acoustic patterns form a three-dimensional map of where oil and gas most likely lie.

The seismic air guns probably produce the loudest noise that humans use regularly underwater, and it is about to become far louder in the Atlantic. As part of the Trump administration’s plans to allow offshore drilling for gas and oil exploration, five companies have been given permits to carry out seismic mapping with the air guns all along the Eastern Seaboard, from central Florida to the Northeast, for the first time in three decades. The surveys have not started yet in the Atlantic, but now that the ban on offshore drilling has been lifted, companies can be granted access to explore regions along the Gulf of Mexico and the Pacific.

And air guns are now the most common method companies use to map the ocean floor.

“They fire approximately every 10 seconds around the clock for months at a time,” said Douglas Nowacek, a professor of marine conservation technology at Duke University. “They have been detected 4,000 kilometers away. These are huge, huge impacts.”

The prospect of incessant underwater sonic tests is the latest example cited by environmentalists and others of the growing problem of ocean noise, spawning lawsuits against some industries and governments as well as spurring more research into the potential dangers for marine life.

Some scientists say the noises from air guns, ship sonar and general tanker traffic can cause the gradual or even outright death of sea creatures, from the giants to the tiniest — whales, dolphins, fish, squid, octopuses and even plankton. Other effects include impairing animals’ hearing, brain hemorrhaging and the drowning out of communication sounds important for survival, experts say.

So great is the growing din in the world’s oceans that experts fear it is fundamentally disrupting the marine ecosystem, diminishing populations of some species as the noise levels disturb feeding, reproduction and social behavior.

A 2017 study, for example, found that a loud blast, softer than the sound of a seismic air gun, killed nearly two-thirds of the zooplankton in three-quarters of a mile on either side. Tiny organisms at the bottom of the food chain, zooplankton provide a food source for everything from great whales to shrimp. Krill, a tiny crustacean vital to whales and other animals, were especially hard hit, according to one study.

“Researchers saw a complete absence of life around the air gun,” said Michael Jasny, director of marine mammal protection for the Natural Resources Defense Council, one of several environmental groups suing the federal government in an effort to stop the seismic surveys. Containers are loaded onto a cargo ship at a port in Qingdao in east China’s Shandong province. (AP photo)

Measuring the Sounds of Commerce

Each seismic shot from the air guns is estimated to reach up to 260 decibels. Container ships, another noisemaker on the seas, make sounds up to 190 decibels. (The launch of a space shuttle, by contrast, reaches about 160 decibels for those nearby. )

Every 10 decibels is an order of magnitude. An explosion of 260 decibels, then, is 10 million times more intense than the sound of a container ship. Because water is much denser than air, sound travels underwater about four times faster and much farther than above the sea’s surface.

“At any one time, there are 20, 30 or 40 seismic surveys going on around the world,” for oil and gas exploration, as well as for geological research, Nowacek said.

All told in the first year of the newly approved exploration, more than 5 million of these huge explosions would occur all along the United States’ eastern coastline.

Christopher Clark, a senior researcher in the bioacoustics program at the Cornell Lab of Ornithology, who has studied whale communication for 40 years, described the noise as a “living hell” for undersea life, which is exquisitely tuned to sound.

A coalition of environmental groups has filed suit against the National Marine Fisheries Service, a division of the National Oceanic and Atmospheric Administration, claiming the agency is violating several federal laws protecting wildlife, including the Endangered Species Act, by allowing the blasts. And governors from 10 states have protested the offshore drilling decision and are seeking to join the legal action.

Harming or injuring marine mammals is forbidden under the Marine Mammal Protection Act. In November, NOAA issued five authorizations allowing seismic exploration companies to “incidentally, but not intentionally, harass marine mammals.” Because of the government shutdown, other government action to begin testing has been postponed until at least March 1.

The companies involved in the exploration disagree sharply with the claims of harm. “More than 50 years of extensive surveying and scientific research indicate that the risk of direct physical injury to marine mammals is extremely low,” Gail Adams-Jackson, vice president of communications for the International Association of Geophysical Contractors, said in a statement. She contended that the groups’ efforts are solely aimed at stopping offshore exploration and development.

The companies and NOAA Fisheries said that the effects on marine life could be kept to a minimum by careful monitoring and mitigation, which would involve acoustic monitoring to detect mammal vocalizations and shutting down exploration when sensitive species like the endangered North Atlantic right whales are observed.

There are no more than 400 to 500 of the migratory right whales, which can grow up to 60 feet long, and calve and nurse their young from North Carolina to Florida. Right whales are already emaciated and stressed by a warmer ocean — they live in the Gulf of Maine, which has warmed considerably more than other bodies of water. Reproduction has been drastically reduced. And the seismic noise can mask ship sounds, resulting in collisions, another leading danger for the whales.

“We require strong protections for North American right whales in areas where they are expected to be present, including all designated habitat,” Benjamin Laws, a NOAA biologist said, defending the issuance of the permits.

Carrying Sound Across the Ocean

Years of constant blasts could be extremely harmful, others argue, and not just for right whales. Because of the way sound reverberates in the ocean, the noise can be unrelenting.

“Prolonged chronic stress of any kind is bad, because it shunts resources away from reproduction,” Nowacek said. “It presses your adrenal glands to produce adrenaline and stress hormones, causes weight loss and immunosuppression.”

In a landmark study, when ship traffic greatly decreased after the events of Sept. 11, 2001, researchers noted a significant drop in stress hormones in the feces of right whales in the Bay of Fundy in Canada, the first evidence that ship noise can cause chronic stress in whales.

Moreover, acoustic communication is primary in the marine ecosystem, where visibility is so limited. Many whale species are highly intelligent, social beings and communicate in the clicks, moaning, singing and calling of their own languages. Some whales, and orcas (the largest in the dolphin family despite their killer whale designation), hunt prey through echolocation, a kind of natural sonar.

“Sound can travel enormous distances very fast and whales have evolved to take advantage of that,” said Clark, who has listened to whales near Ireland from coastal Virginia. “They can hear storms a thousand miles away.”

Aside from the seismic noise, compounded sounds from container ships to navy sonar are posing a problem for marine life. As the number of ships moving around the world has increased significantly in recent years, cavitation, the noise from the synchronous collapse of bubbles created by a ship’s propeller, as well as the rumble of ship engines, poses a bigger and bigger problem. A recent study found that shipping noise could double by 2030.

Noise masks whale expressions between families, which can affect orientation, feeding, care of young, detection of prey and even increase aggression. Already 80 percent of communications of some species of whales is masked by noise, according to models assessed by a team of biologists.

“It’s ripping the communications system apart,” Clark said. “And every aspect of their lives is dependent on sound, including finding food.”

About 20,000 known species of fish are able to hear, and some 800 species are known to make sounds of their own to hunt, mate, navigate and communicate. One fish, the plainfish midshipman, for example, sings to the females to mate and defends nests with barking sounds.

Other studies show that beaked whales are extremely sensitive to noise, and in frantic efforts to escape seismic air guns or navy sonar they have been forced to change their dive patterns to the surface. Some have died from decompression sickness.

Loud noises can also affect behavior and even ecosystems by altering where species go. In 2008 in Canada’s Baffin Bay, seismic testing is believed to have delayed the southward migration of narwhals — the whales with the long spiral tusk — until it was too late and they became trapped in sea ice. More than 1,000 died.

The blasting can take a particular toll on a part of the body in invertebrates called the statocyst. In octopuses, squid, lobsters and other invertebrates, the organ is responsible for orientation and balance. Damaged, it disorients the creatures and makes them vulnerable to predators.

Still, while research has expanded in the last decade, much is difficult to pinpoint and sometimes impossible to study. “You can’t study a whale’s hearing,” said Lindy Weilgart, a researcher at Dalhousie University in Nova Scotia and the author of an analysis of 115 studies, released in 2018.

The exposure of mammals to such noise has been likened to living in a permanent construction zone. “Sometimes listening on the headphones gives you a headache within 10 minutes,” Molly Patterson, a researcher who studies underwater sound, said in the 2016 documentary “Sonic Sea.” “You have to take the headphones off, you have to turn the volume down. The whales can’t turn the volume down.”

One way many have escaped the cacophony is by heading to the Arctic. But as polar ice melts, and seismic exploration and ship traffic there increase, it is no longer the refuge it once was.

Ocean noise can also have economic repercussions: Research in Norway shows that commercial fishermen return to the dock with 40 to 80 percent fewer fish when exploration is underway nearby.

Regulations on underwater noise are few and far between and experts are searching for solutions. The United Nations recently held a weeklong symposium on noise pollution and marine life.

Voluntary efforts to turn down the volume are having an effect: The Port of Vancouver started the ECHO (Enhancing Cetacean Habitat and Observation) Program, asking mariners to reduce noise by having ships slow down and fix cavitation on the propellers.

At the same time, though, if the Trans Mountain pipeline is built from the tar sands of Alberta to a port near Vancouver, as planned, tanker traffic in the Salish Sea is expected to increase by seven times. Marine biologists say that would exacerbate the difficulties the region’s endangered orcas already face in finding prey.

Scientists and environmentalists are urging that more research be conducted, to learn much more about the effects of sound and ship traffic on the creatures of the sea.

“The effects on marine mammals are felt across an extraordinarily large scale,” Jasny, the marine mammal protection director, said. “And loud noise has an effect on species across the food web.”