The robots are made entirely of hydrogel - a tough, rubbery, nearly transparent material that is composed mostly of water. 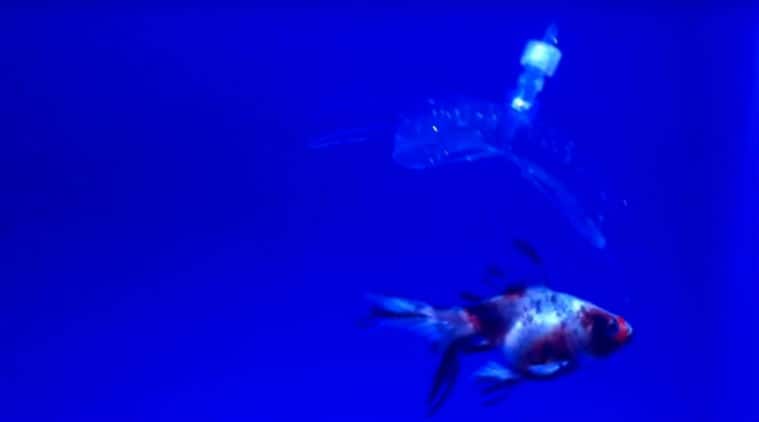 As the robots are both powered by and made almost entirely of water, they have similar visual and acoustic properties to water. ( Source: Youtube)

MIT engineers have designed new transparent, gel-based robots that move when water is pumped in and out of them and can perform a number of fast, forceful tasks, including kicking a ball underwater and grabbing and releasing a live fish.

The robots are made entirely of hydrogel – a tough, rubbery, nearly transparent material that is composed mostly of water.

Each robot is an assemblage of hollow, precisely designed hydrogel structures, connected to rubbery tubes. When the researchers pump water into the hydrogel robots, the structures quickly inflate in orientations that enable the bots to curl up or stretch out.

The team at Massachusetts Institute of Technology (MIT) in the US fashioned several hydrogel robots, including a finlike structure that flaps back and forth, an articulated appendage that makes kicking motions, and a soft, hand-shaped robot that can squeeze and relax.

As the robots are both powered by and made almost entirely of water, they have similar visual and acoustic properties to water, researchers said. They propose that these robots, if designed for underwater applications, may be virtually invisible.

“We are actively collaborating with medical groups to translate this system into soft manipulators such as hydrogel ‘hands,’ which could potentially apply more gentle manipulations to tissues and organs in surgical operations,” he said.

Yuk and Zhao used 3-D printing and laser cutting techniques to print their hydrogel recipes into robotic structures and other hollow units, which they bonded to small, rubbery tubes that are connected to external pumps.

To actuate, or move, the structures, the team used syringe pumps to inject water through the hollow structures, enabling them to quickly curl or stretch, depending on the overall configuration of the robots. Yuk and Zhao found that by pumping water in, they could produce fast, forceful reactions, enabling a hydrogel robot to generate a few newtons of force in one second.

The research was published in the journal Nature Communications.

Pakistan, US undertake early review of state of bilateral ties