Medical tests to soon be possible via coin-sized chip

A research study has been able to create medical labs on a chip, through a coin-shaped device. 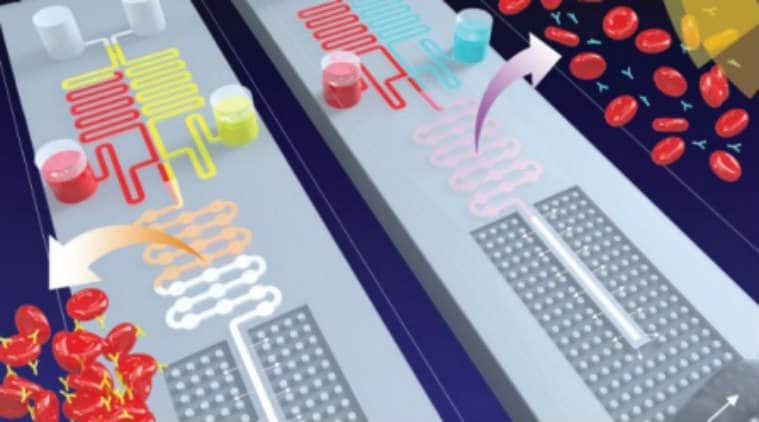 In a series of experiments, the research team showed how its chip was able to accurately decipher the eight blood types based upon time it takes for different blood types to flow through the chip. (Image Source: University of Buffalo)

Scientists have moved closer to developing a faster, more efficient and reliable ‘lab on a chip’ device the size of a small coin. The obstacles to creating a lab on a chip include finding an efficient and reliable way to mix and move blood and other fluids through the chip’s tiny valves and pumps. A new study published in the journal Lab on a Chip has moved the scientific community closer to solving the problem.

Researchers at the University at Buffalo (UB) in the US fabricated a chip that uses two different types of force – capillary and vacuum driven – to manipulate how fluids travel in micro- and nano-sized channels. The advance solves a vexing issue, the researchers said, because in such devices, when blood is mixed with a reagent to produce a biological and/or chemical reaction, the pressure difference between the two fluids often causes them to flow backward instead of into the desired channel.

“It’s kind of like plumbing; we are moving fluids around and dealing with different pressures and flows. Only we are doing it on a microchip, as opposed to a house,” said Kwang W Oh, associate professor at UB. “The chip could become the basis for faster, more efficient and reliable lab on a chip devices. It puts us closer to using such devices where medical labs are lacking, such as the developing world, battlefields and even our homes,” said Oh.

In a series of experiments, the research team showed how its chip was able to accurately decipher the eight blood types based upon time it takes for different blood types to flow through the chip. For example, when mixed with a certain antibody, Type A blood will thicken and flow slower. The device could be used for other biological and chemical assays, Oh said. The new chip requires no sensors or external sources of power. That is key for medical device manufacturers, which are searching for ways to inexpensively produce disposable lab on a chip products, researchers said.