The mathematical simulations show that the bomb’s foamy nature means there are myriad pathways that the steam can flow through and escape, and ultimately explode. 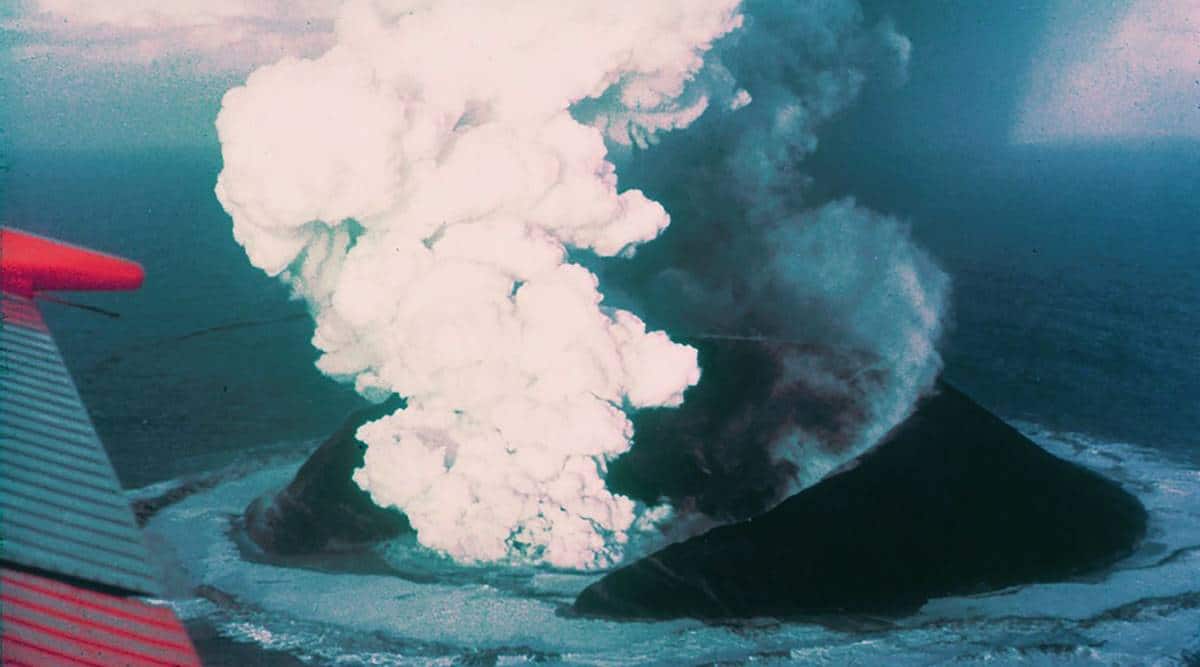 Observing volcanic bombs as they form and fail to explode is all but impossible, so researchers solved the mystery of how they form with a new mathematical model. (NOAA via The New York Times)

It would be reasonable to hear the term “volcanic bomb” and presuppose that such an object tends to explode. But a specific type of volcanic bomb rarely lives up to the second half of its name: These objects get blasted into the air, crash into the ground and disappointingly fail to detonate.

These volcanic bombs — plasticky, partly molten blisters of magma no smaller than a peach — are shot out of a volcano submerged by a shallow body of water, such as a lake or the sea close to shore. In the process, the bombs acquire plenty of water. That trapped water encounters the bomb’s scorching-hot innards and gets vigorously boiled into steam.

The sudden accumulation of steam within the projectile should blast the bomb apart in midair. “Rocks cannot survive in the face of that pressure,” said Mark McGuinness, a mathematician at Victoria University of Wellington in New Zealand. And yet so many of these bombs become duds, hitting the ground with an anticlimactic thud.

Solving this riddle would do more than scratch a long-standing scientific itch. Volcanic bombs, a fundamental part of many explosive eruptions, are also a lethal hazard. If more of them blew up midflight, that would be preferable to their clonking someone on the head.

Wishing to crack the case, Ian Schipper, a volcanologist at Victoria, joined forces with McGuinness and Emma Greenbank, also a mathematician at the university. They built a mathematical model that simulated the launch of a bomb from a virtual volcano and replicated the changing pressures and temperatures of the orb’s insides.

Reporting their results in The Proceedings of the Royal Society A, the team concludes that water both makes and defuses these doughy volcanic bombs.

Volcanic bombs are a common feature of an array of explosive eruptions. This includes Surtseyan eruptions, named after Surtsey, a volcano off the Icelandic coast that explosively grew above the waves in the 1960s until it formed a new island.

During this type of eruption, clumps of magma are propelled through a shallow body of water. Concurrently, volcanic debris launched skyward splashes back down into the same water. This forms an ashy slurry, one dense enough to punch into and hydrate those gloopy magmatic clumps destined to become bombs.

That these soggy bombs rarely explode has long proved baffling. But scientists can’t really study these speedy projectiles in detail as they are launched out of a volcano.

“You don’t want to try and go catching them,” said Rebecca Williams, a volcanologist at the University of Hull in England who was not involved with the study.

Volcanologists have studied volcanic blocks — entirely solid chunks of ballistic volcanic matter — by firing them out of a custom-made cannon. But they have not yet shot molten clumps of magma out of a gun, an activity unlikely to ever pass a safety review.

This new mathematical model, one bolstered by data taken from real-life Surtseyan bombs that have landed and cooled off, appears to have come to the rescue.

As magma rises through a volcano and toward the surface, it depressurises, and the water imprisoned inside it escapes as a vapor, creating bubbles. That clump of foamy magma then gets launched through the water and becomes a bomb. The lake or seawater that then infiltrates the bomb violently boils off. But the team’s mathematical simulations show that the bomb’s already foamy nature means there are myriad pathways that the steam can flow through and escape, thus stopping a pressure spike and, ultimately, an explosion.

A few bombs, those lacking a foamy network of holes created by the magma’s own water, will succumb to the pressure of the newly generated steam and self-destruct. But most are sufficiently frothy, allowing the steam to evacuate without incident.

“Their solution’s really elegant; I think it works really well,” Williams said, referring to the model.

For McGuinness, the research achieved another goal: As a dramatic example of how mathematics can solve nonabstract problems, he hopes it will help to change public perception of this field of study.

“To say you’re working on exploding bombs and volcanic bombs is much more inspiring to people,” he said.