Extreme rainfall events have tripled since 1950 in central India and killed over 69,000 people across India while leaving 17 million homeless, says a study by weather scientists. 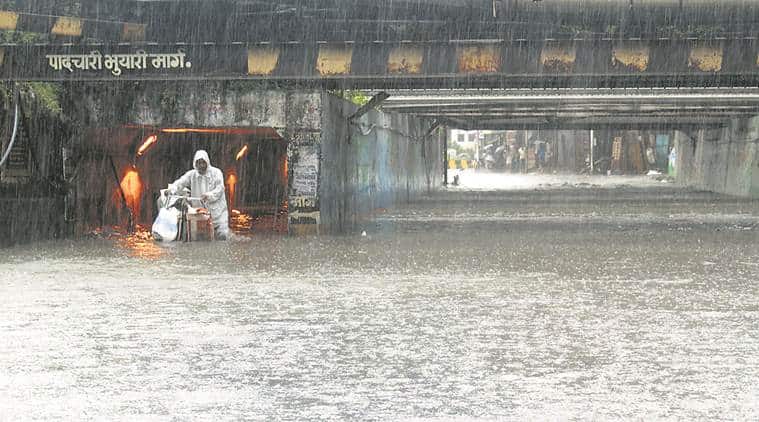 Extreme rainfall events have tripled since 1950 in central India and killed over 69,000 people across India while leaving 17 million homeless, says a study by weather scientists. (File Photo)

Extreme rainfall events have tripled since 1950 in central India and killed over 69,000 people across India while leaving 17 million homeless, says a study by weather scientists. The paper, by scientists in India, US and France, has been published by Nature Communications journal in its October issue. The states that witnessed the worst incidents of extreme rainfall events include Gujarat, Maharashtra, Madhya Pradesh, Chhattisgarh and Telangana as well as parts of the Western Ghats – Goa, north Karnataka and south Kerala.

“There have been 268 reported flooding events in India over 1950-2015 affecting about 825 million people, leaving 17 million homeless and killing 69,000 people (according to the International Disaster Data Base),” the study said. According to lead author Roxy Mathew Koll, a scientist with the Indian Institute of Tropical Meteorology, a premium
research body under the Ministry of Earth Science (MoES), extreme rainfall is defined as more than 15 cm of rain in a day and “spread over a large region, enough to cause floods”. “These widespread extremes were two per year in central India during 1950s. Now, it’s six per year,” Koll told PTI.

M Rajeevan, MoES secretary, Subimal Ghosh and his team at IIT Bombay, Raghu Murtugudde of the University of
Maryland and Pascal Terray, Sorbonne University, Paris, are co-authors of the paper. Rajeevan attributed global warming and its impact as a major reason for the erratic and extreme weather pattern over the region. “As the atmosphere and the oceans are getting warmer due to increasing carbon dioxide, a result of human activities, atmosphere holds more moisture. This results in two factors. The first is that warm moist air is lighter than cold dry air and hence makes the atmosphere unstable as it rises up,” Koll explained.

The second factor, Koll added, is that since the atmosphere holds more moisture, it dumps it all together – a
heavy rainfall event. But why is central India the focal point of erratic and extreme rain events? “The low pressure areas (circulation) that brings rains move around this region. Cloud formation also forms around this area,” Rajeevan told PTI. The combined population in central India is more than the total population of the United States put together.

The fact that this intensification is against the background of a declining monsoon rainfall, which has been
observed in previous studies, makes it catastrophic, as it puts several millions of lives, property and agriculture at risk, experts say. According to the paper, floods alone lead to losses amounting to $3 billion in India, 10 per cent of global economic losses.

“The plains of central India are largely flood-prone. Flash floods, landslides and torrential rains often kill
thousands and displace millions of people as well as animals, underscoring the urgency in comprehending and predicting these events,” Koll said.