Unraveling how an extinct mollusk got its strange shell 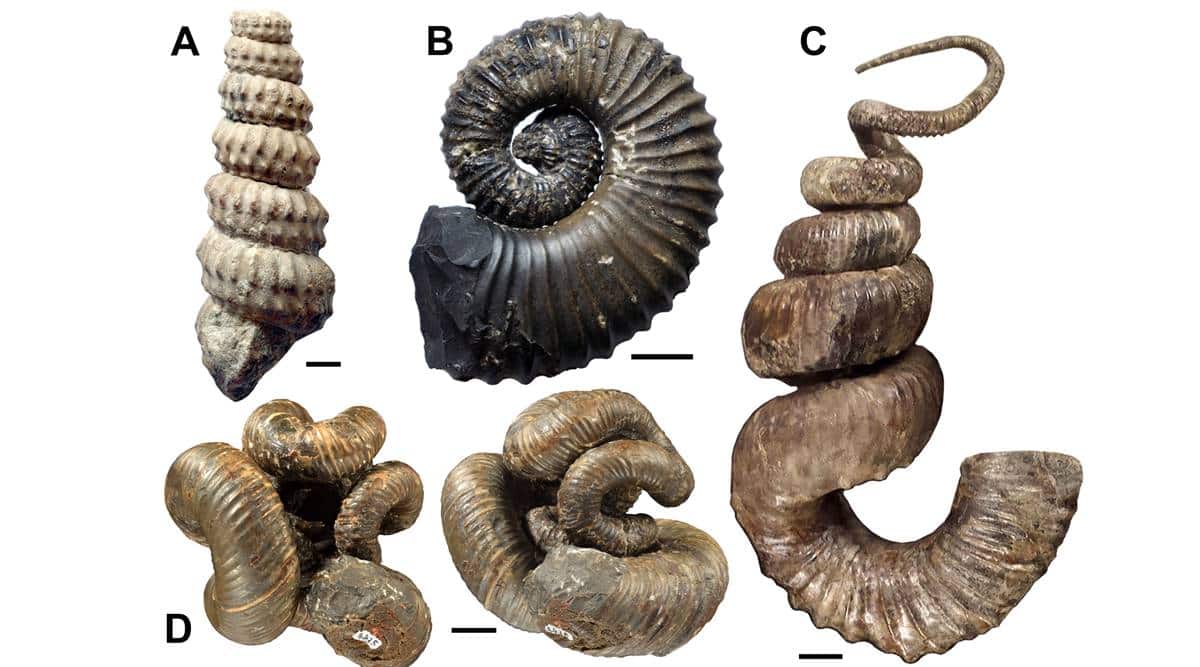 If you’ve seen one ammonite, you may think you’ve seen them all. Most of the 10,000 species of the extinct cephalopods sported tightly coiled shells with polite mouthfuls of tentacles.

Enter Nipponites mirabilis, a species of ammonite straight out of an M.C. Escher painting. In place of the classic, coiled-snake shell design, it substituted something far more ludicrous: a convoluted shell twisting into itself with no obvious beginning or end.

“It looks like a chunk of rope that someone threw out a window,” said Kathleen Ritterbush, a paleoecologist at the University of Utah.

“The first time you look at it, it’s just this tangled mess,” said Derek Moulton, a mathematician at the University of Oxford. “And then you start to look closely and say, oh, actually there is a regularity there.”

Moulton and colleagues developed a mathematical model that they say reveals the forces acting on Nipponites’ baffling shells and the shells of many other mollusks. The research was published in November in the Proceedings of the National Academy of Sciences.

Their model suggests a mismatch between the growth rates of the mollusk’s soft body and its hard shell, which creates mechanical forces that twist the body, resulting in an asymmetric shell. The model also explains how other snails develop their characteristic spiraling shells, the researchers said.

“It’s a beautiful result,” said Katharine Long, an applied mathematician at Texas Tech University, who was not involved with the research. “This is the simplest model that can possibly produce all three forms,” Long added, referring to the traditional spiral of an ammonite shell, the helical spiral of a snail and the meandering swerves of Nipponites.

The paper is the latest collaboration between Moulton; Alain Goriely, chair of mathematical modeling at Oxford; and Régis Chirat, a researcher at the University of Lyon in France. The three scientists seek to understand the physics underlying seashell formation. They have published on the spiny shells of sea snails and the interlocking shells of oysters.

In one of the team’s early meetings, Moulton and Goriely visited Chirat in Paris, and the trio spent an afternoon admiring the shells and ammonites within the Grand Gallery of Evolution at the National Museum of Natural History.

But the knots of Nipponites were perplexing. “Nipponites has become an obsession for me,” Chirat said over a Zoom call from his office, which holds hundreds of fossils and seashells.

Mollusks create their own shells using their mantle, a fleshy outer organ. The mantle secretes calcium carbonate in layers, which harden into the shell. The researchers wanted to design a model that captured the interactions between the mollusk’s soft body and the shell as it hardened.

So how could a symmetric body secrete an asymmetric shell? “Suppose there is a mismatch between the way the body is growing and the way the shell is growing,” Moulton said. “That’s the whole premise of the model.”

If the body grows faster than the shell, it will be too big for its shell house and will generate mechanical stress that leads the body to twist inside the shell. Moulton offered an analogy: Imagine the ammonite shell as a long, hard tube stuffed with two soft pool noodles that are longer than the tube. To relieve the stress, the noodles (the soft body) twist inside the tube (the shell). As the soft body twists, it rotates the edge of the mantle secreting the shell, resulting in an asymmetric shell.

“If the conditions are right, these abnormal shapes like Nipponites emerge,” Moulton said.

By tweaking the level of the mismatch and stiffness properties of the soft body in the model, the researchers produced the bizarre shells of other unorthodox ammonites, such as Didymoceras.

But there are other questions left unanswered by the model, she said, including the biological costs, benefits and trade-offs of having such an asymmetric shell.

Recent research suggests Nipponites’ wild shell helped the ammonite slowly pirouette in the water column in search of prey. Kenneth De Baets, a paleobiologist at Friedrich-Alexander-Universität Erlangen-Nürnberg in Germany, who was not involved with the new study, said he is curious to see how the model holds up as paleontologists uncover more fossilized soft ammonite tissue.

“These animals have been dismissed as oddballs and mistakes,” Ritterbush said. “But it is actually a perfectly executed plan, a spiral coil of balance.”

But even with these questions, Ritterbush said, the new model underscores how seemingly bizarre shapes like Didymoceras and Nipponites are more like ordinary ammonites than they might appear.