The European Space Agency's Mars Express was launched more than 19 years ago. The MARSIS instrument aboard the spacecraft was designed to study Mars but a recent software update meant that it was able to take observations of Phobos, the larger of Mars's two moons. 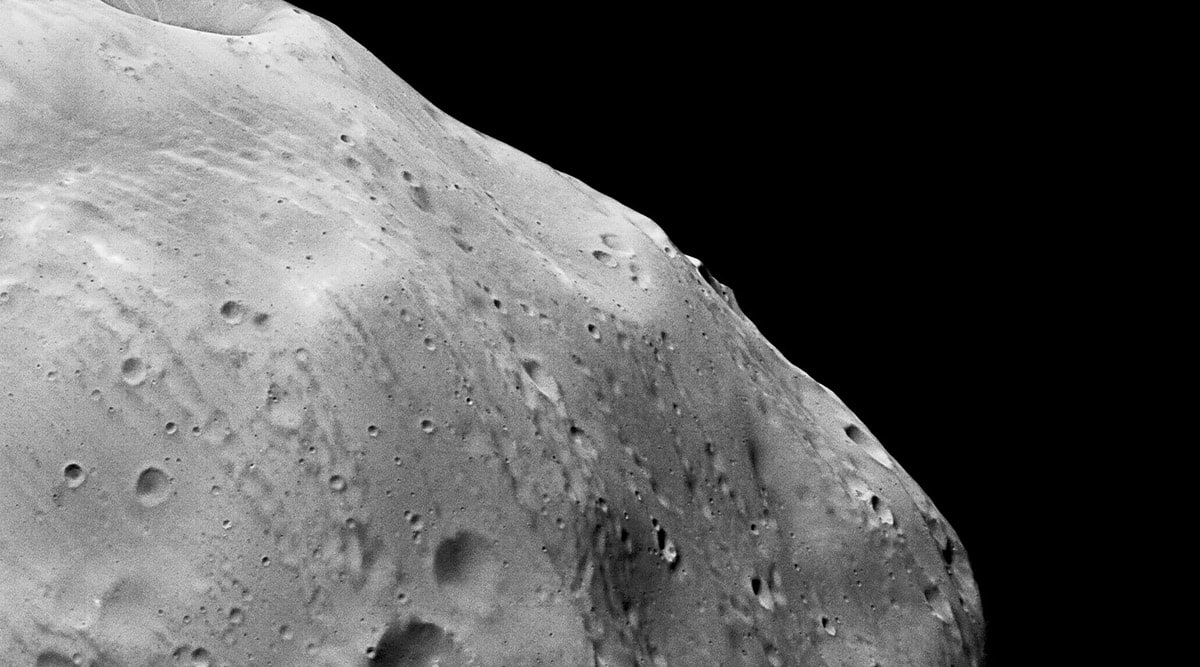 This is part of an image of Phobos captured by Mars Express in 2010. (Image credit: ESA/DLR/FU Berlin)

After nearly twenty years of operation, the European Space Agency’s (ESA) Mars Express spacecraft has received a software update that allows it to look at the mysterious Martian moon Phobos at much greater detail than ever before.

“During this flyby, we used MARSIS to study Phobos from as close as 83 km. Getting closer allows us to study its structure in more detail and identify important features we would never have been able to see from further away. In future, we are confident we could use MARSIS from closer than 40 km,” said Andrea Cicchetti, of INAF, the Italian National Institute for Astrophysics, in an ESA press statement.

The MARSIS instrument aboard Mars Express was initially designed to study the internal structure of Mars. This means that it works best at the typical distance between the spacecraft and the planet’s surface, which is around 250 kilometres. But the recent software upgrade allows the instrument to be used at much closer distances, which could help scientists understand the mysterious origin of Phobos better, according to ESA.

Phobos is the largest of the two Martian moons and measures about 28 kilometres at its widest. It orbits the red planet around three times a day and it orbits so close to the planet’s surface that it cannot be seen from some locations on Mars. This moon is getting close to Mars, by about 1.8 metres every hundred years. According to NASA, this means that it will either crash into Mars in 50 million years or break up into a ring.

The most prominent feature on the asteroid is a 9.8-kilometer-wide impact crater named Stickney. Apart from being gouged and nearly shattered by the impact that created Stickney, Phobos has also been bombarded by thousands of other meteorite impacts, as seen from observations made by the Mars Global Surveyor. Some of these impacts triggered landslides that left trails marking the slopes of the craters.

The MARSIS instrument on Mars Express was able to “peer beneath the surface” of Phobos thanks to its new software update. (Image credit: INAF – Istituto Nazionale di Astrofisica)

On the top right of the image is a “radargram” of Phobos acquired by MARSIS. MARSIS emits radio signals that bounce off features on the moon and returns to the instrument. These “echoes” are captured in the radargram. The more powerful the echo, the brighter the signal.

While most of these waves are reflected by the moon’s surface, some travel through it and get reflected back at the boundaries between layers of different materials below the surface. Scientists can examine these reflected signals to map the structure of the moon below the surface and study properties like the thickness and composition of the material.
In the case of Mars, the instrument reveals layers of ice, soil, rock or water but the internal structure of Phobos is unknown, and this upgrade to MARSIS could offer important insights into that.

The continuous bright line on the radargram shows the echo from the Moon’s surface while the points below it are either “clutter” caused by the shape of features on Phobos, or, potentially, signs of structural features that are below the surface. The sections on the left and bottom-right of the images show the path of the MARSIS observations across the surface of Phobos.

The Marian Moons eXploration (MMX) mission, led by the Japanese Space Agency (JAXA), is scheduled to launch in 2024 and will land on Phobos and return samples of its surface to Earth in 2029. These samples will go a long way towards helping scientists understand what the moon is made of.