esearchers at Egypt's Nile University are developing a way to turn dried shrimp shells that would otherwise be thrown away into thin films of biodegradable plastic. 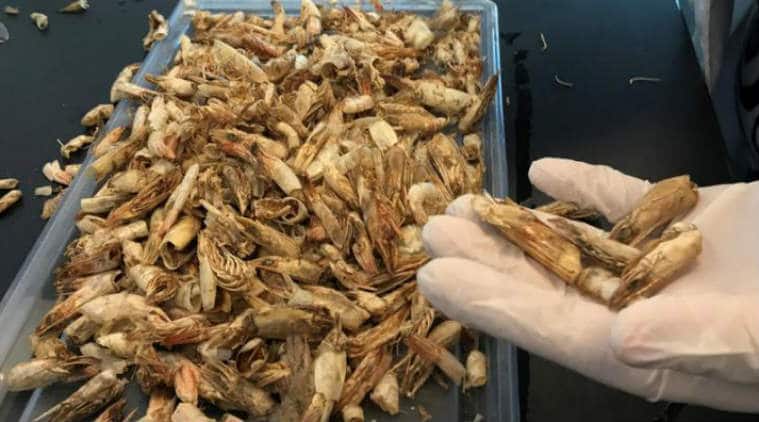 Researchers at Egypt’s Nile University are developing a way to turn dried shrimp shells that would otherwise be thrown away into thin films of biodegradable plastic they hope will be used to make eco-friendly grocery bags and packaging.

Six months into their two-year project, the research team has managed to create a thin, clear prototype using chitosan, a material found in the shells of many crustaceans. “If commercialised, this could really help us decrease our waste… and it could help us improve our food exports because the plastic has antimicrobial and antibacterial properties,” Irene Samy, a professor overseeing the project, told Reuters.

The researchers buyfrom restaurants, supermarkets and local fishermen at cheap prices. Using shrimp shells is more sustainable because it could replace synthetic materials used in plastics and cut the amount of biowaste produced by the Egyptian food industry, Samy said.

The shells are cleaned, chemically treated, ground and dissolved into a solution that dries into thin films of plastic, a technique the team says has potential for large-scale industrial production. “Egypt imports around 3,500 tonnes of shrimp, which produce 1,000 tonnes of shells as waste… Instead of throwing the shells away, we can make biodegradable plastic bags,” Hani Chbib, a researcher on the project, told Reuters.

The project is a collaboration between the Nile University team of four and another research group at the University of Nottingham in Britain, where Samy conducted her post-doctoral research and first started experimenting with the idea.

Also Read: Green shopping bags made from shrimp shells could save the planet

The team has only produced small samples and the project is not yet ready to go into commercial production but the team is working hard to develop properties that would allow the material to go into widespread use. “We are continuing to work on enhancing its properties, like thermal stability and durability,” Samy said.