Black Hole Event Horizon highlights: First Image of Black Hole in India: The black hole was discovered at the centre of Messier 87, a massive galaxy in the nearby Virgo galaxy cluster.

Scientists around the world await the first image of the blackhole. (Source: BBC)

Black Hole Event Horizon highlights: An international scientific team on Wednesday announced a milestone in astrophysics revealing the first-ever photo of a black hole. The research was conducted by the Event Horizon Telescope (EHT) project, an international collaboration that began in 2012 to try to directly observe the immediate environment of a black hole using a global network of Earth-based telescopes.

Using data from six telescopes located across the world, the scientists involved in the Event Horizon Telescope (EHT) project have imaged the Sagittarius A* — the black hole located at the centre of the Milky Way galaxy — and another massive black hole 53.5 million light-years away in galaxy M87, PTI stated.

The images provide astrophysicists with the first look at the innards of a black hole. The energy within is thought to be powerful enough to power quasars and other violent phenomena from the nuclei of galaxies, including the jets of intense radiation that spew 5,000 light years from the galaxy M87.

As hot, dense gas swirls around the black hole, like water headed down a drain, the intense pressures and magnetic fields cause energy to squirt from either side. As a paradoxical result, supermassive black holes, which lurk in the centers of galaxies, can be the most luminous objects in the universe.

For some years now, the scientific literature, news media and films such as “Interstellar” and the newly released “High Life” have featured remarkably sophisticated and highly academic computer simulations of black holes. But the real thing looked different, stated the New York Times. For starters, the black holes in movies typically are not surrounded by fiery accretion disks of swirling, doomed matter, as are the black holes in Virgo and Sagittarius.

Maedos quotes Hawking: 'If you feel you are in a black hole, don't give up. There's a way out'

"Stephen Hawking once said 'If you feel you are in a black hole, don’t give up. There’s a way out.' His words could not be more appropriate today. I hope we could be inspired by them to be hopeful about the future. Thanks to the scientists for making us dream today," said Maedos.

Three years ago, scientists had heard a sound of two much smaller black holes merging to create a gravitational wave, as Albert Einstein predicted, AP stated. The image adds light to that sound.
Scientists used extraordinary sensitive observing system to hear the sounds of the two black holes merging.

According to AP, The black hole depicted in the image is about 6 billion times the mass of our sun and is in a galaxy called M87 that is about 53 million light years from Earth. One light year is 5.9 trillion miles, or 9.5 trillion kilometers.

In fact, Jessica Dempsey, a co-discoverer and deputy director of the East Asian Observatory in Hawaii, said the fiery circle reminded her of the flaming Eye of Sauron from the ``Lord of the Rings'' trilogy.

The Event Horizon Telescope team built an Earth-sized telescope by linking radio dishes around the world. The project to look for the supermassive black hole started in April 2017.

Shepherd Doeleman shows the first image of a black hole during the press conference in Washington. Watch: Scientists unveil first-ever image of the black hole
Moedas quotes Hawking: 'It is sad that facts are sometimes stranger than fiction'

Moedas quoted Stephen Hawking: 'It is sad that facts are sometimes stranger than fiction.'

"And nowhere it is more true than the black holes," says Moedas

I am proud of science. We believe deeply in freedom of science: Moedas

"I am proud of science. Science today is giving a lesson to politicians. It's showing that today we take a picture of what one man dreamt 100 years ago, you need from 40 different countries," says Moedas.

"I am proud of Europe. We have put up around 44 million euros," says Moedas. "Europe has a winning formula. We believe deeply in the freedom of science that the choices in science are not done by politicians."

History of science will be divided from time before and after the image of black hole: Moedas

"The history of science will be divided from the time before the image and the time after the image," Moedas says.

Scientists in Brussels say, "Finally! No more simulations. You are looking for the very first time, at a real black hole."

Know the scientists behind the black hole discovery

This black hole is as big as our solar system

Unlike smaller black holes that come from collapsed stars, supermassive black holes are mysterious in origin. Situated at the center of most galaxies, including ours, they are so dense that nothing, not even light, can escape their gravitational pull, according to AP news. This one's "event horizon" — the point of no return around it, where light and matter begin to fall inexorably into the abyss — is as big as our entire solar system.

Three years ago, scientists using a massive and intricate observing system heard the sound of two much smaller black holes merging to create a gravitational wave, as Albert Einstein predicted. The new image, published in the Astrophysical Journal Letters and announced around the world in several news conferences, adds light to that sound, AP stated.

The black hole resides about 54 million light-years from Earth

The image reveals the black hole at the center of Messier 87, a massive galaxy in the nearby Virgo galaxy cluster. This black hole resides about 54 million light-years from Earth, Reuters reported.

"This is a huge day in astrophysics," Reuters quoted US National Science Foundation Director France Córdova. "We're seeing the unseeable."

We are open to world, advancing science for humanity: Moedas

"Today’s success shows we have a winning formula in Europe: investing in shared research infrastructures, funding high-risk/high-gain research & supporting scientists to follow their dreams. We are open to the world, open to global cooperation & advancing science for humanity," says Moedas speaking at European Commission. 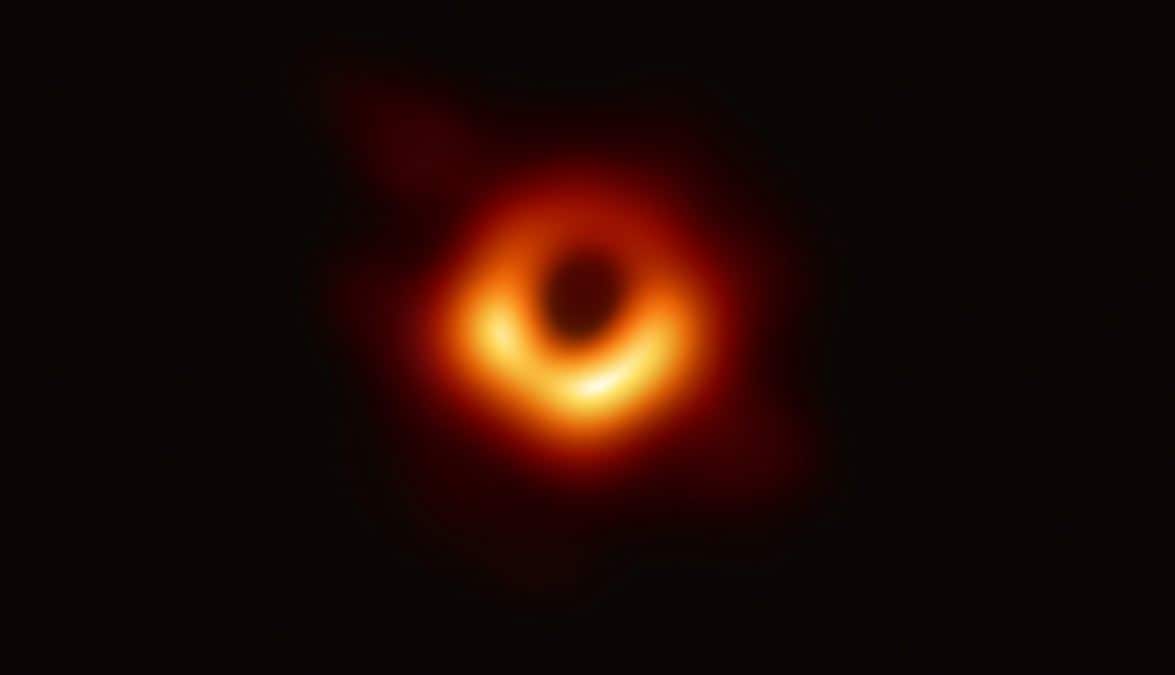 The gravitational pull of black holes lets nothing -- not even particles and electromagnetic radiation such as light -- escape from inside it. This makes imaging a blackhole nearly impossible, PTI stated.

Blackholes swallow the surrounding gas, which swirls around in a flattened disk, spiralling into it at speeds close to light. The radiation from this hot whirlpool, however, can be seen.