NASA has identified more than 50 methane "super-emitters" in Central Asia, the Middle East and the Southwestern United States. 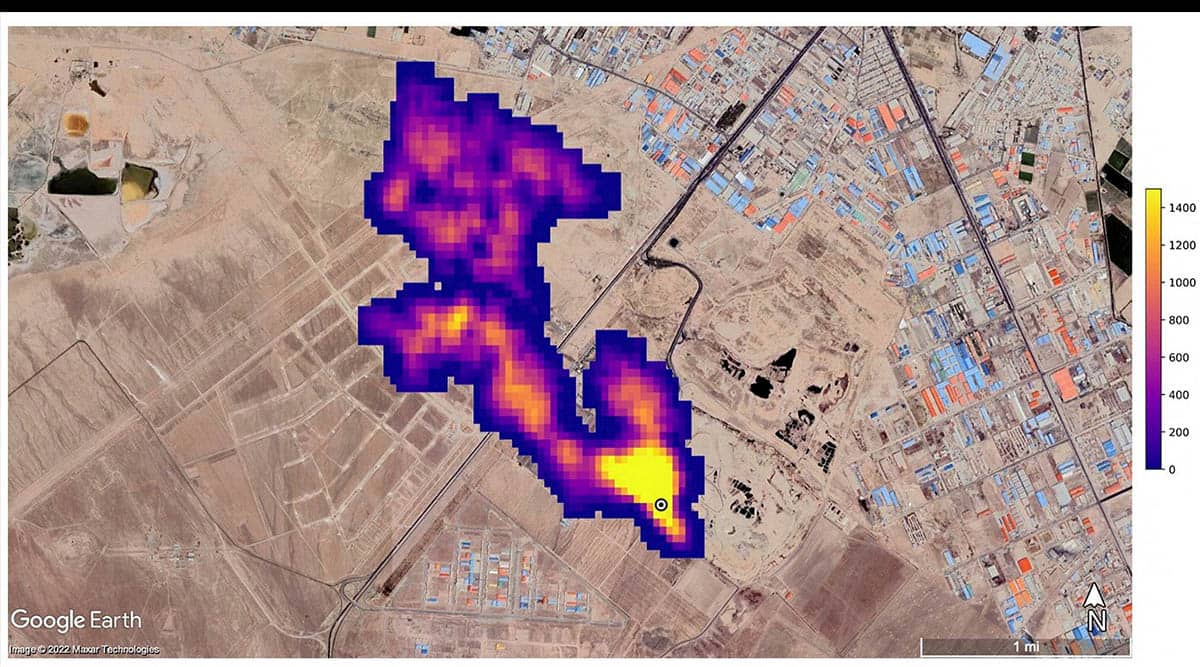 Imaging of a methane plume at least 3 miles (4.8 km) long rising from a major landfill, where methane is a byproduct of decomposition, south of Tehran, Iran, captured by NASA's orbital imaging spectrometer, is overlaid on a satellite photo in this handout image released October 25, 2022. Google Earth/Maxar/NASA/JPL-Caltech/Handout via REUTERS

An orbital NASA instrument designed mainly to advance studies of airborne dust and its effects on climate change has proven adept at another key Earth-science function – detecting large, worldwide emissions of methane, a potent greenhouse gas.

The device, called an imaging spectrometer, has identified more than 50 methane “super-emitters” in Central Asia, the Middle East and the Southwestern United States since it was installed in July aboard the International Space Station, NASA said on Tuesday.

The newly measured methane hotspots – some previously known and others just discovered – include sprawling oil and gas facilities and large landfills.

The spectrometer was built primarily to identify the mineral composition of dust blown into the atmosphere from Earth’s deserts and other arid regions by measuring the wavelengths of light reflected from the surface soil in those areas.

That study, NASA’s Earth Surface Mineral Dust Investigation, or EMIT, will help scientists determine whether airborne dust in different parts of the world is likely to trap or deflect heat from the sun, thus contributing to warming or cooling of the planet.

It turns out that methane absorbs infrared light in a unique pattern that EMIT’s spectrometer can easily detect, according to scientists at NASA’s Jet Propulsion Laboratory (JPL) near Los Angeles, where the instrument was designed and built.

Circling Earth once every 90 minutes from its perch aboard the space station some 250 miles (420 km) high, EMIT is able to scan vast tracts of the planet dozens of miles across while also focusing in on areas as small as a soccer field.

“Some of the (methane) plumes EMIT detected are among the largest ever seen – unlike anything that has ever been observed from space,” said Andrew Thorpe, a JPL research technologist leading the methane studies.

A byproduct of decomposing organic material and the chief component of natural gas used in power plants, methane accounts for a fraction of all human-caused greenhouse emissions but has about 80 more heat-trapping capacity pound-for-pound than carbon dioxide.

Compared with CO2, which lingers in the atmosphere for centuries, methane persists for only about a decade, meaning that reductions in methane emissions have a more immediate impact on planetary warming.

Examples of newly imaged methane super-emitters showcased by JPL on Tuesday included a cluster of 12 plumes from oil and gas infrastructure in Turkmenistan, some plumes stretching more than 20 miles (32 km).

Scientists estimate the Turkmenistan plumes collectively spew methane at a rate of 111,000 pounds (50,400 kilograms) per hour, rivaling the peak flow from the 2015 Aliso Canyon gas field blowout near Los Angeles that ranks as one of the largest accidental methane releases in U.S. history.

Two other large emitters were an oilfield in New Mexico, and a waste-processing complex in Iran, emitting nearly 60,000 pounds (29,000 kg) of methane per hour combined. JPL officials said neither were previously known to scientists.

EMIT, one of 25 Earth science instruments in orbit, could potentially find hundreds of methane super-emitters before its year-long mission ends, NASA said.