Xiaomi Mi 6X (Mi A2) launch LIVE UPDATES: The smartphone has been launched in Wuhan, China today and here are the details.

Mi 6X, which is Xiaomi’s latest upcoming smartphone, has been officially launched in China today. The company hosted an event in the city of Wuhan, and had a livestream for the event as well. Mi 6X is the new version of the older Mi 5X, which was launched as Mi A1 in India and other global markets.

Mi A1 ran stock Android, though the camera app was from Xiaomi itself. The smartphone is assured of two years of Android updates and the Mi A1 has already been upgraded to Android Oreo in India. The Mi A1 was launched at Rs 14,999 and while the phone is out of stock in India, the company insists it has not been discontinued. In contrast, the Mi 6X is already being referred to as Mi A2 in India, even though the company has not yet confirmed if it will launch the phone in India.

Mi 6X features a newer 18:9 aspect ratio display coupled with the newer Qualcomm Snapdragon 660 processor. The highest variant of the Mi 6X comes with 6GB RAM, 128GB storage and the rear camera is 12MP+20MP, while the front camera is 20MP.

Xiaomi Mi 6X: Will this launch in India?

That's really the big question for Xiaomi fans in the market. Mi 5X launched as Mi A1, and the expectation is that Mi 6X will come to the market as Mi A2. Xiaomi has not really announced anything  on this front. Still Mi 6X being rebranded as a stock Android One phone for the Indian market would be interesting.

The other big difference: Redmi Note 5 Pro has a 4000 mAh battery in comparison to the 3010 mAh one on the Mi 6X.  Finally the newer Mi 6X sports a Type-C USB port at the bottom, while the Redmi phone has a regular micro-USB port.

Here's a quick comaprison of Mi 6X vs Mi 5X. The older Mi 5X has a 5.5-inch display , Qualcomm Snapdragon 625 processor, 4GB RAM and 64GB storage along with 12MP+12MP rear camera.  The front camera was 5MP and the onboard battery was 3080 mAh. The phone was called Mi A1 in India and came with stock Android, which was upgraded to Android Oreo. Mi 5X was launched as an Android One smartphone in India.

In comparison, the Mi 6X has a bigger 5.99-inches display with the 18:9 aspect ration. Processor is Qualcomm Snapdragon 660 processor, it comes with 4GB/6GB RAM variants and 64GB and 128GB storage. The rear camera is now 12MP+20MP, while the front camera is 20MP. The onboard battery is 3010 mAh and it comes with a face unlock feature as well. There's a fingerprint scanner at the back as well. Mi 6X also gets a Type-C USB port with QuickCharge 3.0. The Mi 6X will have a face unlock feature as has become common on most smartphones these days.

Here are details of the Mi 6X processor. Xiaomi has confirmed the smartphone comes with Qualcomm Snapdragon 660 processor with LP DDRX 4X RAM. The RAM size will be 4GB / 6GB.

The front camera is a 20MP one which is using the Sony IM376 sensor. Xiaomi claims the AI feature will help improve se Xiaomi Mi 6X: Here are all the features revealed so far Mi 6X features 12MP + 20MP dual camera combination. The 12 MP sensor is the Sony IMX486 one with f/1.75 aperture, large 1.25μm pixels  and the company is promising a great performance, even in low-light.

The front camera is 20MP confirms the company. It will feature a soft LED flash as well. Xiaomi is also showcasing the low-light performance of its selfie camera. Xiaomi MI 6X: All the focus is on the camera and its AI features

If one goes by Xiaomi's presentation, the Mi 6X has one of the best cameras. Of course, how it performs in real life is something users will decide. The Mi 6X camera also includes an AI-driven feature where it can recognise items like food, etc.  The AI feature can also improve portraits taken in low-light.

Xiaomi is showing the capabilities of the camera even in low-light. The portrait shots appear to be quite detailed, if one goes by the sample size. Xiaomi Mi 6X is being compared to Oppo R15 and iPhone X in the company's presentation. The Mi 6X will have a metal unibody design like its predecessor. The phone is only 7.3mm in thickness and sports a Type-C USB port. Xiaomi Mi 6X will have a Type-C charging port at the bottom.   At the bottom of the phone are dual speakers.

Xiaomi is now discussing the design of the Mi 6X. It looks like the phone is only 7.3 mm in thickness, which makes it thinner than Oppo R15 and Vivo X21, according to the company's slides. The design languages is similar to Redmi Note 5 Pro. It will have a fingerprint scanner at the back of the phone, similar to how other Xiaomi phones offer.  Mi 6X continues with a curved back design as well. 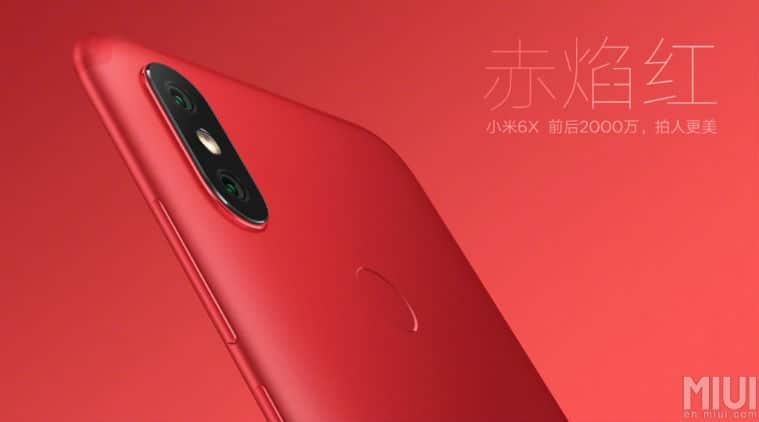 Based on what the company has revealed and the leaks, the Mi 6X will have a Qualcomm Snapdragon 660 processor, according to a leaked reported XDA Developers. The phone will come with 6GB RAM and 128GB storage, which the company has confirmed in its own posters. There will be a vertical 20MP+12MP camera on the back and a 20MP front camera. The previous Mi 5X had a 5MP front camera. Battery wil be 2980 mAh on the Mi 6X.

Xiaomi Mi 6X: Will this phone come to India as Mi A2

That's the question for the Mi 6X. Now the previous Mi 5X was introduced as Mi A1 in India and it was an Android One smartphone. There's speculation that Xiaomi will do the same for the new variant. However, the India team has not yet made any announcement regarding this and if a launch is planned, it will likely take place later on. Mi 6X is supposed to come with great dual-rear cameras, going by Xiaomi's teasers and it looks like this will be a mid-range phone.

Xiaomi Mi 6X: It will come in five colours

The live updates from Xiaomi have confirmed that the Mi 6X will launch in five different colours. These are a blue,  rose gold (which looks really pink to be honest) red, gold and a black coloured option. The Mi 6X design also indicates a look and feel very similar to the Redmi Note 5 Pro smartphone, which also had vertical dual rear cameras.  The previous Mi 5X, or Mi A1 as it was called in India, had horizontal dual rear cameras.

The Mi 6X launch is live on the company's China website. Again the livestream event will start at 11.30 am for India. Xiaomi's english MIUI forum also has live updates from the event. The event is taking place in the city of Wuhan in China. Xiaomi CEO Lei Jun will be present for the unveiling of the Mi 6X smartphone.

Mi 6X is the successor to last year's Mi 5X from Xiaomi. In India, Mi 5X was rebranded and launched as the Mi A1 which came with stock Android. Mi A1 had a 5.5-inch display with 1080 p resolution, Qualcomm Snapdragon 625 processor, 4GB RAM and 64GB expandable storage support. The rear camera was 12MP+12MP with a telephoto and wide-angle setup.

With Mi 6X, the company has introduced dual 20MP cameras, though the rear camera setup is 20MP+12MP, while the front camera will be 20MP. There will also be a 6GB RAM and 128GB storage. The battery size is 3010 mAh on the Mi 6X.