Reliance Jio data packs will start at Rs 50 for 1GB, which comes down to 5 paise per MB. According to Ambani, 1GB data at Rs 50 is the lowest data tariff in the world. 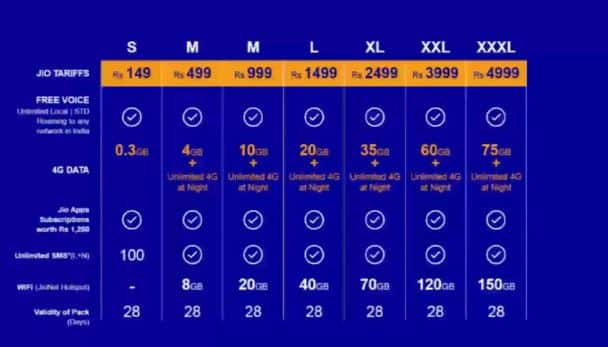 Reliance Jio data packs will start at Rs 50 for 1GB, which comes down to 5 paise per MB.

Ambani said the tariff was based on three pillars: one, the customer should play for only voice or data; two, data must be affordable; and, three, pricing structure should be simple. So Reliance Jio won’t charge for voice calls, data prices will be what Ambani calls the “cheapest in the world” and there will be just 10 tariff plans to choose from.

To start with Reliance Jio data packs will start for as low as 5 paise per MB adding up to Rs 50 for 1GB, a fraction of the cheapest data plan in India at the moment. Reliance Jio will offer data packs ranging from Small (S) to XXXL. The small plan starts at Rs 149 for 0.3GB data along with access to 100 SMSes. There’s a Medium pack which comes at Rs 499.

Watch Video: All you need to know about Reliance Jio 4G services

All data services will free till December 31, 2016 after which users will be able to choose their tariff plan. The free services will start September 5, he said, though they have been free for all users for a few months now. Ambani called it the Jio welcome offer, the best anyone was offered anywhere in the world.