Nokia brought back the classic Nokia 3310 in a rejuvenated version with a colour screen.

Nokia, the Finnish mobile phone maker which gave most of the world connected population it’s first cellular phone, is back with a set of smartphones aimed to woo those who have used a device from the legacy brand.

For now Nokia, which has given rights to build, sell and distribute devices with its brand name to Finland-based startup HMD Global, has come to market with the Nokia 6, Nokia 5 and Nokia 3. These three smartphones, catering to different price points and screen sizes, will stand out for its Nokia grade build quality featuring a metallic body. It will also have a version of pure Android, so far seen only on Google’s Pixel phones and Moto devices.

The Nokia 6 was announced earlier in China and raked in over a million pre-bookings in a few hours. This phone will become available globally, including India, in the second quarter of this year. Priced at €229, the Nokia 6 will be the premium offering for now, though priced in the mid-range. There is no real flagship for now, and you can expect a phone like that later in the year with high-end specs including a top of the line processor and superior camera features.

Also read: Nokia 3310 launched at MWC 2017: Specifications, price and everything else

All the devices announced now — priced between €139 and €229 (between Rs 9,700 and Rs 16,000) — are all in the super-mid segment which gets most of the volumes in the smartphone space. If these devices work, you could well expect a more affordable smartphone in the €80 ($100) range to help Nokia go for the kill.

The best thing of Nokia’s rebirth is the fact that it is not trying too hard to bank on its legacy mobile phone maker. In fact, the company is clearly aiming for users who have never experienced a Nokia before. The metal body, pure Android and affordable price tag should help towards this. This is a good strategy since everyone who has used a Nokia device before will not need much convincing about the quality of these devices. For now, it seems Nokia is going to challenge the Moto G series — which coincidentally announced its new phones at the same time in Barcelona — with the pure Android and no-nonsense design USPs. 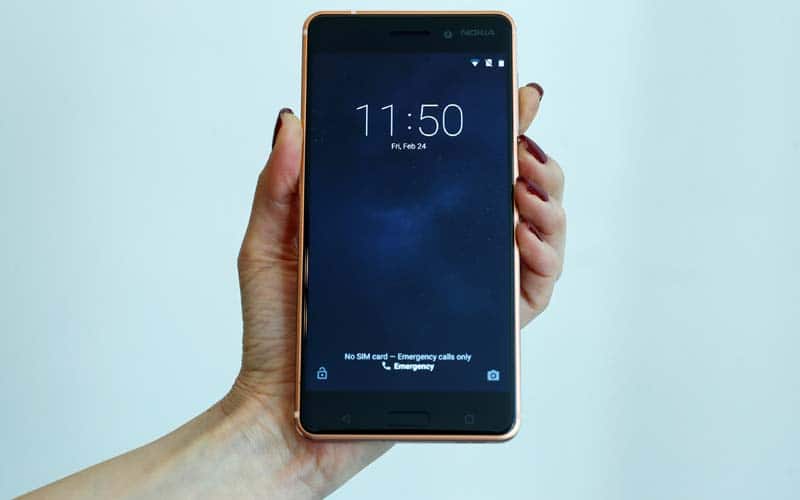 The best thing of Nokia’s rebirth is the fact that it is not trying too hard to bank on its legacy mobile phone maker. Image of Nokia 6 smartphone. (Source: Reuters)

Nokia had one last thing at the end of its show at the Mobile World Congress in Barcelona. It brought back the classic Nokia 3310 in a rejuvenated version with a colour screen and the kind of colours this model would not even have dreamt of when the phone was first launched at the same conference in 2000.

While Nokia sort of vanished from smartphone shops over the past year, the brand continued to sell feature phones and does reasonably well in that space. It is behind only Samsung in feature phone shipments now. However, it remains to be seen if the Nokia 3310 will be able to make inroads in this segment, especially with the price tag which would place it around Rs 3,500 (Euro 49) in India. At that price, the Indian user would rather get an affordable smartphone than an expensive feature phone.

Also read: In connecting people with the 3310, Nokia is not really connecting the dots

So, the Nokia 3310 will most likely end up as a collectors’ item, or something preferred by users who have taken a conscious choice not to use a smartphone. It is unlikely the 3310 will become a volume play in markets like India. There is only so much nostalgia can sell.

Here are the specifications and price for the Nokia 6, Nokia 5, Nokia 3 and Nokia 3310: