Nokia 6, Nokia 5, and Nokia 3 smartphones have officially been launched in India. Nokia 3 and Nokia 5 are offline exclusive and the price is Rs 9,499 and Rs 12,899 for these phones respectively. Nokia 6 is the most expensive phone at a price of Rs 14,999 in India. Nokia 6, Nokia 5 and Nokia 3 smartphones have been launched in India by HMD Global, and here is the official pricing.

Nokia 3 and Nokia 5, which will be offline exclusive in India, are priced at Rs 9,499 and Rs 12,899. Nokia 6, which is the most premium smartphone of the lot, is Amazon India exclusive and costs Rs 14,999. On the availability of  the new smartphones, Nokia 3 is coming to India first on June 16, which is this Friday. Nokia 5 pre-bookings start on July 7, and this is another offline exclusive phone. Finally, the Nokia 6 will be come to India only towards the end of July, with pre-bookings starting on July 14. We’ll now discuss the specifications of the three Nokia smartphones.

Coming to the specifications, Nokia 6 has a 5.5-inch Full HD IPS display and a metal unibody design. The display has a Sculpted Corning Gorilla Glass on top, and the pixel density is 403 ppi, the display also has a sunlight readability feature. Dimensions of the Nokia 6 are 154 x 75.8 x 7.85 mm.

Nokia runs the Qualcomm Snapdragon 430 processor with 3GB RAM and 32GB storage (expandable to 128GB). There’s also a limited edition Arte Black colour phone that comes with 4GB RAM and 64GB storage, but again we’ll have to wait and see if that launches in India. The storage is expandable on the phone.

On the camera front, the Nokia 6 has a 16MP one with PDAF, 1.0um pixel size, f/2 aperture and dual tone flash. The front camera is 8MP with autofocus, 1.12um pixel size, and f/2 aperture along with 84 degrees field of view. It has a 3000 mAh battery with micro-USB charging port.

Sensors on the Nokia 6 are Accelerometer (G-sensor), ambient light sensor, e-compass, Hall sensor, fingerprint sensor, gyroscope, proximity sensor, NFC (sharing). The phone sports WiFi, Bluetooth 4.1 and supports USB on-the-go as well. Nokia 6 also features a fingerprint scanner on the front. On the audio front, it comes with Dolby Atmos support and dual speakers. Nokia 6 also comes with 4G LTE support, and it includes support for bands 1, 3, 5, 7, 8, 20, 28, 38, 40 for LTE, which covers three of the major bands in India, except Band 41.

Nokia 5 is a smaller version, with a similar all metal design like its bigger counterpart. It has 5.2-inch HD IPS display with 2.5 Corning Gorilla Glass on top. HMD Global is claiming 500 nits brightness on the Nokia 5 smartphone’s display, which is also laminated and features “Sunlight visibility improvement,” and polarizer as well. Dimensions of the Nokia 5 are 149.7 x 72.5 x 8.05 mm. 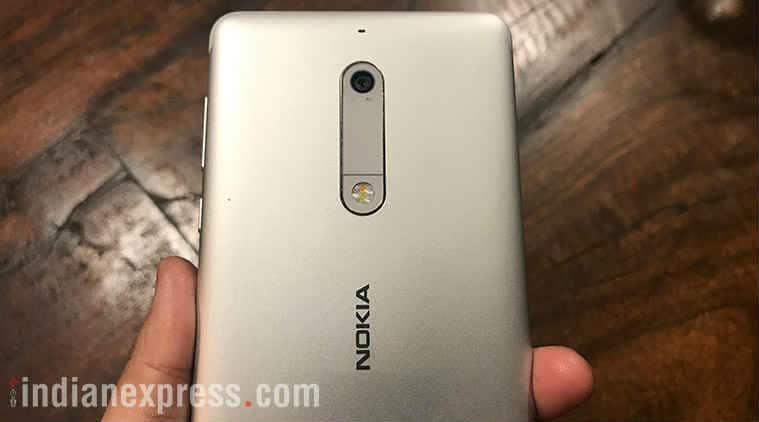 Battery on board is the same as the Nokia 6 at 3000 mAh, and this one also relies on micro-USB port for charging. Sensors on the Nokia 5 are Accelerometer (G-sensor), ambient light sensor, e-compass, fingerprint sensor, Hall sensor, gyroscope, proximity sensor, NFC (sharing). So yes, the Nokia 5 also comes with a fingerprint sensor embedded on the front.

This phone has a single speaker for audio, and there’s a headphone jack as well. Nokia 5 is also 4G LTE capable with support for the same bands as the Nokia 6.

The budget Nokia 3 comes with a plastic body. It sports a 5-inch HD display, (1280 x 720 pixels) and has 2.5 sculpted Gorilla Glass on top, and a brightness of 450 nits. This is a laminated display. On the processor front, Nokia 3 runs the MediaTek MTK 6737 quad-core processor clocked at 1.3Ghz. This phone comes with 2GB RAM and 16GB storage, which is expandable via a microSD slot with 128GB limit. There’s an 8MP camera on the front and the back, and the rear camera has LED flash. 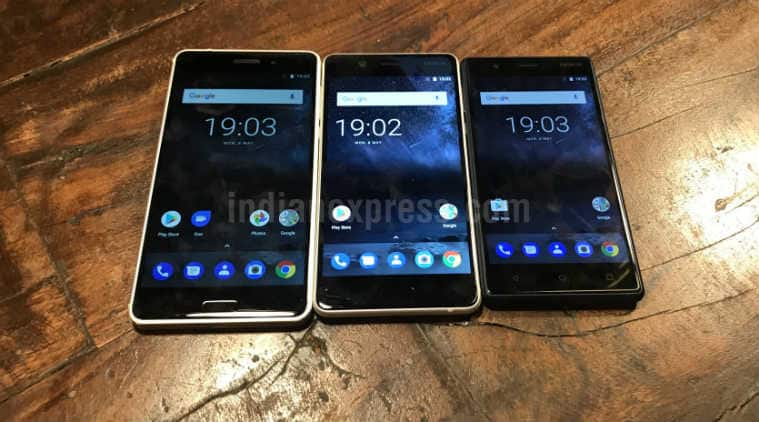 Nokia’s new smartphones are all running stock Android 7, which could help the phones stand out from the competition. HMD Global is also promising an Android O update for the phones.