MWC 2017: The biggest announcements from Nokia, BlackBerry, LG and Samsung

Another Mobile World Congress has come and gone, here's our roundup of the very best from the show. Here you’ll find the best from the Mobile World Congress 2017.

The Mobile World Congress 2017 is over now, and it was one hell of a show. We were introduced to new smartphones, accessories and so much more.

Both Nokia and BlackBerry returned to the smartphone market this year, with the former launching a reincarnated version of the Nokia 3310. BlackBerry also made a comeback with the KeyOne.

LG announced the G6, its flagship smartphone and the successor to the G5. Not to mention, Huawei’s new phones, the P10 and P10 Plus too grabbed our attention. Samsung, on the other hand, showed off its two flagship tablets.

Here you’ll find the best from the Mobile World Congress 2017.

Nokia finally took the wraps off the Nokia 3310 at the Mobile World Congress. HMD Global, the Finnish company with the exclusive rights to market the Nokia brand, has released a revamped version of the classic phone. The refreshed ‘Nokia 3310’ has the same styling as the original model but comes with a full colour screen and slimmer build. It’s a feature phone and its purpose is limited to calls and tests. Oh yes, you can play Snake too. Other than the 3310, HMD Global also announced three Android phones releasing under the Nokia brand name. The Nokia 3, 5 and 6 are budget smartphones, priced from just €139 (or approx Rs 9728).

Also read: Nokia 3310 launched at MWC 2017: Specifications, price and everything else

BlackBerry made its presence felt at MWC 2017 with the official launch of its newest Android smartphone, the KeyOne. It features a 4.5-inch, 3:2-aspect screen and BlackBerry’s signature physical keyboard below it. There’s also a 3505mAh battery, 12-megapixel rear camera and is powered by a Snapdragon 625 processor. 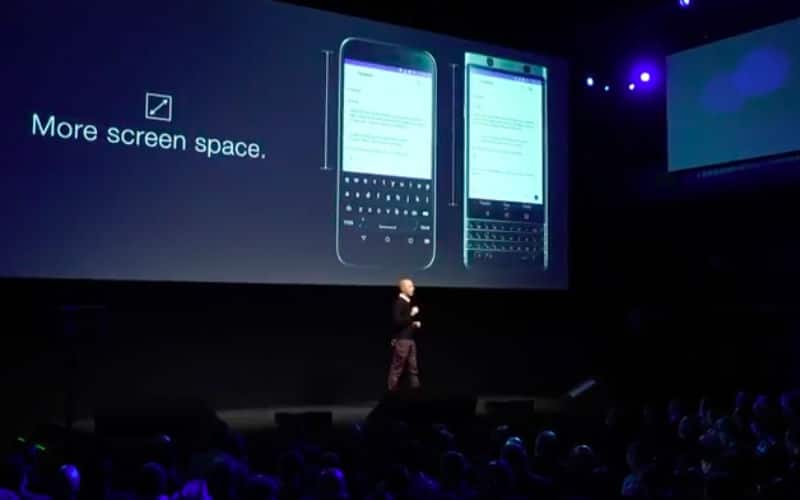 The physical keyboard is the main selling point of BlackBerry KeyOne.

LG took a bold step in to the future with the release of the G6 smartphone. It comes with a 5.7-inch 18:9 display that is taller than usual. Thanks to the reduced bezels, the G6 has the footprint of a 5.2-inch phone. It is also the first smartphone to support Dolby Vision HDR which results in  better contract and a wider colour gamut for video playback. Under the hood is a Snapdragon 821 processor, which is paired with 4GB of RAM. It is also resistant to dust and water and there’s a 3,300mAh battery. The G6 has a dual camera system. Both are 13-megapixel cameras, but one has a standard 71-degree lens and OIS, while the other has a 125-degree wide angle view.

While Samsung didn’t announce the Galaxy S8 in Barcelona; instead, we got to see the unveiling of two new tablets: the Galaxy Tab S3 and the Galaxy Book. The Galaxy Tab S3 runs Android and is seen as a rival to the iPad Pro. It features a high definition display and ships with the S Pen stylus. The Galaxy Book, meanwhile, is a powerful Windows 10 tablet. Coming in two screen sizes, it will also ship with the S Pen. The tablet is aimed at the enterprise market.

Lenovo-owned Motorola has announced the G5 and G5 Plus, with an aim to bring premium features to the mid-end smartphone segment. The Moto G5 Plus features an octa-core Snapdragon 625 processor, 5.2-inch FHD display, and a 3,000mAh battery. Its main selling point is its rear-facing camera, with f/1.7 aperture camera, which is an improvement over the G4 Plus’ camera. The Moto G5 has a smaller 5-inch, Full HD screen. Its battery life is rated at 2,800mAh, and the phone is powered by an octa-core Qualcomm Snapdragon 430. Out of the two phones, the Moto G5 Plus will be launched in India on March 15.

Huawei unveiled two new phones and a smartwatch. Both Huawei P10 and P10 Plus should be seen as an evolution to last year’s P9. They still have Leica-branded dual-lens rear camera setup. However, this time around, there’s a 20-megapixel monochrome sensor with a 12-megapixel main sensor. Huawei has added the Portrait Model feature to create a bokeh effect that’s similar to what you would get from a professional DSLR. Both phones also feature a Leica front-facing camera for the first time. The P10 feature a 5.1-inch 1080p display and  is powered by Kirin 960 processor. The phone comes with 4GB of RAM, 64GB of internal storage, microSD support, and a large 3,200mAh battery. The P10 Plus gets a 5.5-inch WQHD display, 6GB of RAM, 128GB of internal storage, and the rear cameras have a wider f/1.8 aperture compared to the f/2.2 aperture on the P10. The P10 Plus gets a bigger 3,750mAh battery.

Sony also announced a trio of smartphones at MWC 2017. The Xperia XZ Premium is the company’s flagship smartphone this year. It has a 5.5-inch 4K HDR display, 19-megapixel rear “Motion Eye” camera and a Qualcomm Snapdragon 835 processor.The  Xperia XZs is an upgraded version of the existing XZ and also sports the same Motion Eye camera. It gets a  5.2-inch Full HD device, with a Qualcomm Snapdragon 820 processor and 2,900mAh battery.The Xperia XA1 and XA1 Ultra are mid-range handsets with 5-inch and 6-inch displays respectively. The XA1 has a 720p screen while the XA1 Ultra has a Full  HD one. They both have an impressive 23-megapixel rear camera and have octa-core MediaTek processors.

Scientists turn a rose into a ‘super capacitor’, paves way to harvest energy from future plants