Huawei P20 Pro has been launched in India, and it clearly aims to take on Apple's iPhone X and Samsung's Galaxy S9+. Here's our detailed review of Huawei P20 Pro. Huawei P20 Pro review: Price in India is Rs 64,999 and here’s our full review of the smartphone.

Huawei’s P20 Pro is the company’s latest flagship that aims to take on the Apple iPhone X and Samsung Galaxy S9+. The P20 Pro packs a triple-camera system with artificial intelligence capabilities (AI), superior build quality, powerful processor, and a unique design. This premium device will appeal to those who are serious about mobile photography, as well as those who are looking for a top-end alternative to Apple and Samsung. I have spent a week with the Huawei P20 Pro, and here’s my final verdict.

Notches are the flavour of the season and the P20 Pro has rightly imbibed the design language first introduced with the Essential Phone last year, and later popularised by the iPhone X. However, Huawei P20 Pro’s notch (it houses a front-facing camera and speaker) on the top of the 6.1-inch OLED (2,240 x 1,080 pixel) is smaller and it can be switched off in the settings. Our review unit — a Chinese model, we are told — comes in Midnight Blue. Sorry folks, Huawei is not bringing the ‘Twilight’ colour option to India at the moment.

The phone looks and feels great in the hand. The handset is 7.8mm thick and is actually lighter and slimmer than the Galaxy S9. It is the most good-looking Android smartphone I have ever held. It has a solid build and the glass back seamlessly blends with the phone’s chrome frame. The glass back looks gorgeous. But the downside is that it’s quite slippery and prone to fingerprint smudges. Huawei has provided a transparent-case in the box and this solves the problem to an extent. 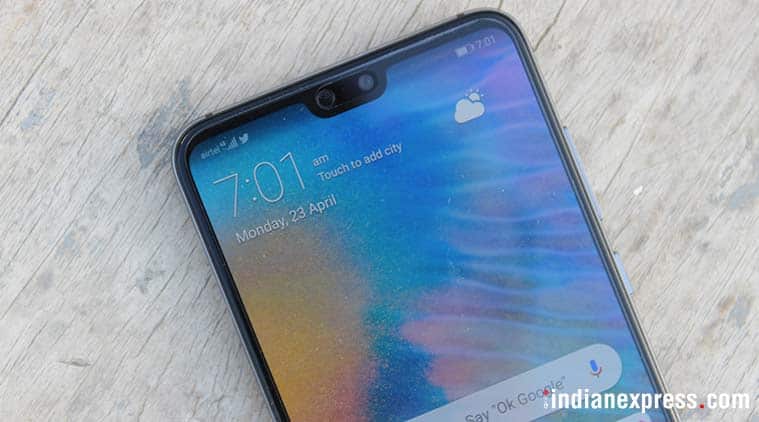 Huawei insists the P20 Pro’s notch is smaller and it can be switched off in the settings.

The rear of the phone houses a trio of cameras – the star attraction of the P20 Pro. All three cameras are arranged vertically. However, I noted that the raised camera housing attracts dust more often. Meanwhile, the front of the phone is dominated by a display – and yes, it’s not entirely bezel-less. The bottom edge has a relatively big bezel and beneath the screen is an oddly placed fingerprint scanner. This is a bit too low in terms of placement, and anyone with big hands won’t be able to use it properly. But the scanner is ultra-fast and it recognised my thumb in mere seconds.

Authentication can be done through the Face Unlock feature as well. But the face unlock does not work all that well. It constantly refused to recognise my face while walking, especially in bright sunlight. I believe a software update will solve the issue. Huawei P20 Pro has a solid build and the glass back seamlessly blends with the phone’s chrome frame.

Huawei is the latest company to ditch the headphone jack. Yes, the P20 Pro doesn’t come with a 3.5-mm headphone jack. You get a USB-C to 3.5-mm adaptor in the box, or just use wireless headphones — I prefer a headphone jack as it is much more convenient. The P20 Pro is also IP67 water resistant too, which means it can handle submersion in up to one metre of water for 30 minutes.

The P20 Pro comes with a 6.1-inch OLED display with a resolution of 2,240 x 1,080 and a pixel density of 408 ppi. This is a Full HD + panel with an aspect ratio of 18:7:9. The OLED display is sharp, but not as bright as the Galaxy S9 Plus’ 6.2-inch Super AMOLED display. Nevertheless, I actually liked the display on the P20 Pro. It’s quite stunning, with deep blacks, rich colours, and wide viewing angles. It should be perfect for watching movies and viewing images and that’s what an average user expects from any phone’s display. Also, Huawei has added some custom settings for colour temperature and an eye-comfort mode that users can enable for night use. The OLED display is sharp, but not as bright as the Galaxy S9 Plus’ 6.2-inch Super AMOLED display.

Like Apple and Samsung, Huawei is another company that uses its own custom-designed chipset inside its flagship smartphones. And the P20 Pro is no exception. It is powered by Huawei’s HiSilicon Kirin 970 octa-core processor and the Neural Processing unit (NPU), which is designed to run Artificial intelligence (AI) applications smoothly. This is the same processor that powers the Mate 10, which unfortunately never came to the Indian market. The P20 Pro comes with 6GB RAM and 128GB internal memory. However, a microSD card slot is missing from the P20 Pro which is a real shame. 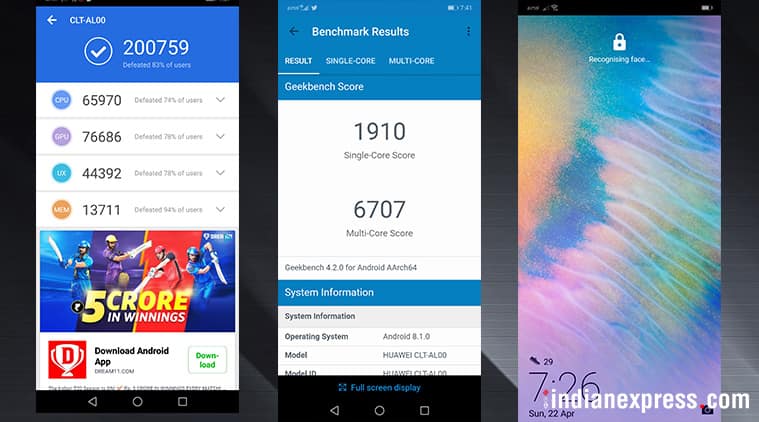 I use my phone a lot for casual music listening, and the speakers on the P20 Pro provide sound with less distortion at maximum volume. Frankly speaking, they sound way better than my Asus laptop. I experienced no signal issues and the call quality was beefier and chunkier than the normal. 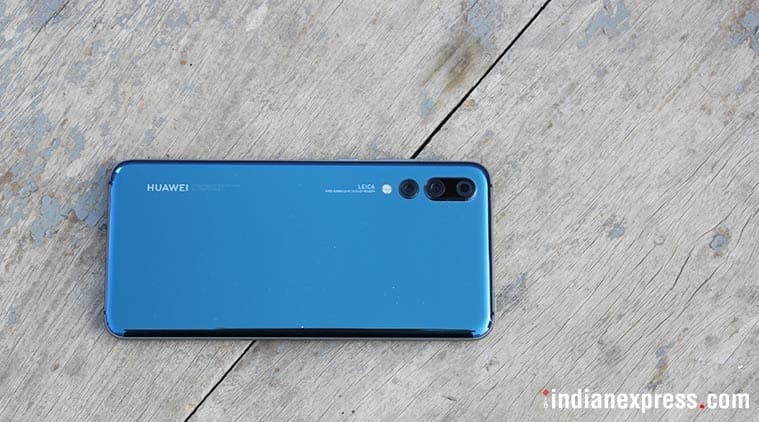 The P20 Pro has a 4000mAh battery on board, and that’s a huge plus point to own the device.

The P20 Pro has a 4000mAh battery on board, and that’s a huge plus point to own the device. Most flagship smartphones don’t even last a day. The P20 Pro is an exception that managed to last one-and-half-day on a single charge. Using this as my primary device for a week, I browsed the web, access apps and played games, watched YouTube videos while commuting in the metro, listening to music, and hundreds of push messages and notifications. If you’re not a pro user like me, I believe the P20 Pro’s battery can last even two days. And it supports quick charging as well. The supplied charger takes roughly two hours to juice up the phone from zero to 100 per cent. The Huawei P20 Pro doesn’t support wireless charging, unlike the iPhone X and Galaxy S9+. The bottom edge has a relatively big bezel and beneath the screen is an oddly placed fingerprint scanner.

The P20 Pro runs Android 8.1 Oreo atop EMUI 8.1 user interface. It has been massively improved, but there’s still a lot of polishing to be done. The UI can be customised and there’s an option to add an app drawer as well. Consumers will like an option that turns the interface to black, plenty of themes options, and the power-saving mode that limits background app activity and disables some functions.

The soul of the P20 Pro is its triple-camera system on the rear, designed in partnership with Leica, one of the oldest camera companies in the world. Huawei P20 Pro is the world’s first smartphone with three cameras on the back. That may seem confusing and technical, but it’s actually very simple. The set-up contains a 40MP RGB colour sensor with a f/1.8 aperture and a massive 1/1.7-inch image sensor, a 20MP monochrome shooter with an aperture of f/1.6, and a third 8MP telephoto camera with a f/2.4 aperture, OIS, and 3x optical zoom (and up to 5x “hybrid zoom”). 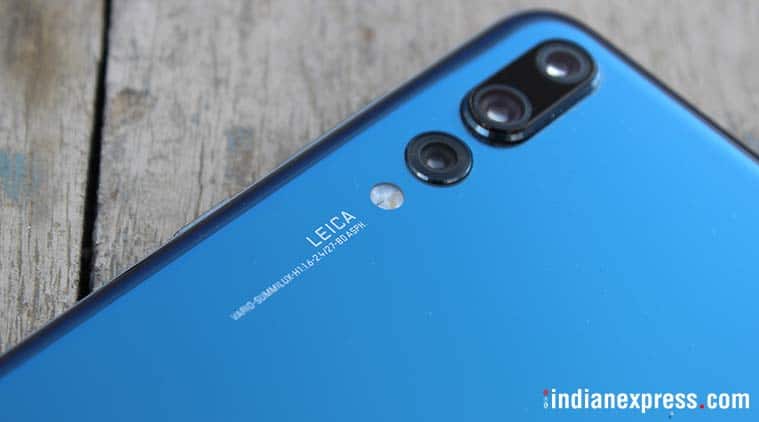 Huawei P20 Pro P20 Pro comes with a triple-camera system on the rear, designed in partnership with Leica.

The main camera is a 40MP unit, but takes 10MP shots by default. It uses a technique called ‘Light Fusion’ that essentially lets four times the light into a pixel, which results in a more crisper and sharper image. Also, the P20 Pro captures pixels measuring 2μm, which is huge on a phone camera (for instance, Google Pixel 2 XL is 1.4µm).

Aside from the technical details, Huawei P20 Pro can capture really good shots, regardless of conditions. The camera is capable of capturing birds, flowers, clouds, and even reflections. In fact, some shots I clicked using the P20 Pro can beat an entry-level DSLR camera. The possibilities are endless with the P20 Pro. Huawei’s camera also takes advantage of a new technology called Master AI, which automatically tweaks settings depending on the scenario and it works just fine in my testing. But what makes the P20 Pro standout is the camera’s ‘Night Mode’. The results are shockingly good. Have a look at the camera samples below. 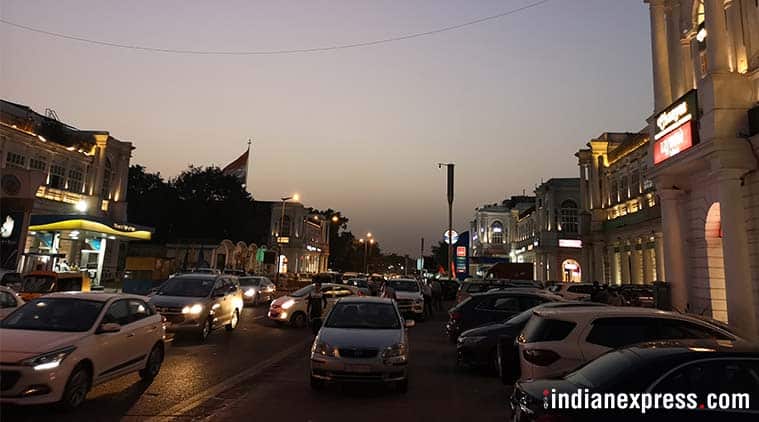 The P20 Pro’s cameras have the ability to do 3x optical zoom and 5x hybrid zoom. Undoubtedly, you will get some impressive shots when you zoom in, and the difference is pretty much noticeable. 3D Portrait Lighting feature is fun to use; it lets you add different lighting effects to your self-portrait shots. The super slow motion video mode, which allows 960 frames per second video at 720p, is a nice addition. The results, however, are not very impressive.

And for selfies, there’s a 24MP shooter with a f/2.0 aperture. The selfie camera is precise and works well in low light. The Huawei P20 Pro can shoot videos in 4K resolution at 30fps (though, the iPhone X capture 4K videos at 60fps), or 1080p video recording at 60fps. 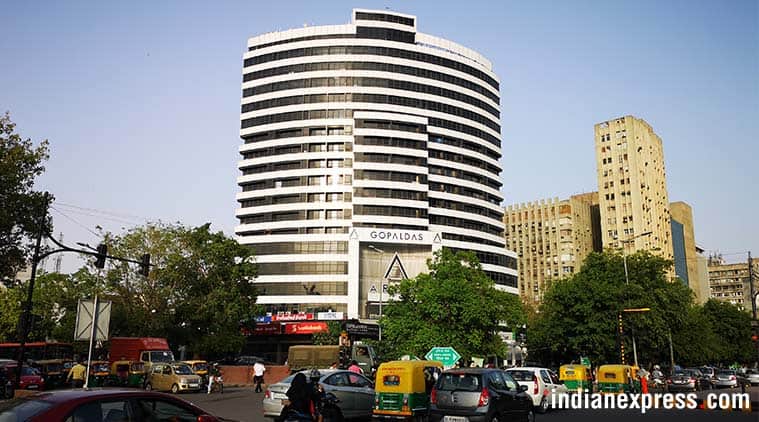 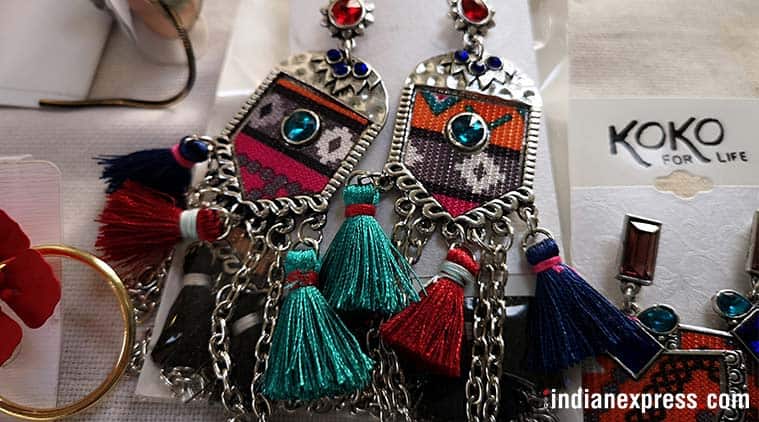 3D Portrait Lighting feature is fun to use; it lets you add different lighting effects to your self-portrait shots.

The P20 Pro is Huawei’s second P-series smartphone in India and it has to be rather good. Having used the handset for a week, I came to the conclusion that the P20 Pro is a convincing option I can put my money on. I hate carrying my DSLR to events, but with the P20 Pro, I will no longer miss the bulky camera. Huawei is selling the P20 Pro for Rs 64,999 in an exclusive partnership with Amazon India. The phone’s price-tag is still less than the iPhone X, which starts at Rs 95,390, but more than Galaxy S9+. If you’re looking for a smartphone that not only excels in the camera front, but also in the design department, Huawei P20 Pro is one such option available in the market.

Released! Download MHT CET 2018 at dtemaharashtra.gov.in, exam on May 10