Check out all you need to know about the new Space Conqueror edition iPhone 12 Pro Max. 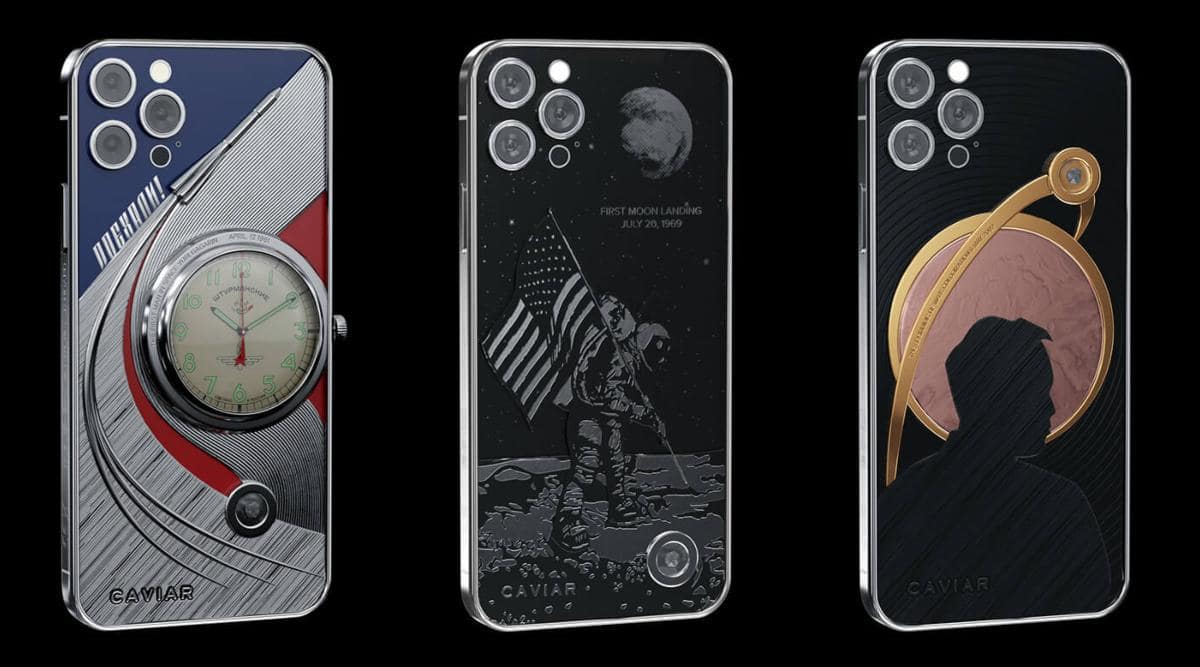 Caviar is a luxury brand that is known for its special limited edition smartphones, consoles, accessories and other devices which are expertly crafted and created in limited quantities. Unsurprisingly Caviar products are often sold at very high prices, which make them more of a collector’s item than daily-driver tech.

Here’s a detailed insight on each of the four Space Conqueror edition smartphones, along with their ‘other-worldly’ prices. We’ll be focussing on the design elements and overlooking the specifications of the phone which will be the same across all the iPhone 12 Pro Max variants.

The iPhone 12 Pro Max Gagarin edition is crafted out of aviation-grade titanium and has a 3D miniature-sized Vostok-K rocket, the same rocket that brought Yuri Gagarin to orbit. The phone also has a navigator’s watch engraved on the back.

This is identical to the watch that Gagarin used to track his 108 minutes in space. A piece of the Vostok-1 capsule is also embedded in the phone. The Gagarin edition will only be available in 12 units and will be priced starting at $8,920 (about Rs 6,69,808).

The second Armstrong edition iPhone 12 Pro Max celebrates the Apollo 11, the first craft to land on the Moon. Honouring Armstrong, the back of the phone features a depiction of the astronaut placing the iconic American flag on the lunar surface.

The Armstrong edition will also come with a fragment of the Apollo 11 spacecraft embedded on the phone. The device will be available in only 11 units with prices starting at $6,450 (about Rs 4,84,334).

The third iPhone 12 Pro Max is designed after Sergei Korolev, the father of practical astronautics. Korolev was also involved with the development of Sputnik, the world’s first artificial satellite that was launched in 1957.

The phone features a hardened titanium case which is double electroplated with 999 gold. On the outer surface of the phone is an October 4, 1957 engraving that symbolises the Sputnik launch. The Korolev edition will only be available in 99 units, with prices starting at $6,760 (about Rs 5,07,625).

The custom iPhone 12 Pro Max Musk edition phone takes Mars as its inspiration, which is the target for SpaceX, Musk’s own aerospace manufacturing and space transportation company. The phone also features a silhouette of Elon Musk and sports pieces of the CRS-14 Falcon 9 rocket as well as the CRS-17 Dragon spacecraft, both of which were involved in delivering supplies to the Internation Space Station.

The Musk Edition will only be made available in 19 special edition units, one for each year since SpaceX was founded. The price of the Musk edition will start at $6,610 (about Rs 4,96,329).

The iPhone 12 Pro Max Jeff Bezos edition features a back made out of hardened titanium and depicts a white engraved feature on a blue background that resembles the logo of Blue Origin, Bezos’s private company that’s developing space rockets. The feather on the design is engraved with the date April 29, 2015, when the company’s New Shepard reusable rocket flew for the first time. The Bezos edition device will start at $5,840 (about Rs 4,38,549).