The Cashify survey found that Apple represented 20 per cent market share in the fast-growing pre-owned mobile phone market last year, though its actual market share in India is less than 5 per cent. While Apple has made significant gains in India’s smartphone market, the fact remains that iPhones are expensive for most Indian buyers. (Image credit: Anuj Bhatia/Indian Express)

When it comes to pre-owned handsets in India, Apple is clearly ahead of Samsung and OnePlus, its rivals in the premium smartphone segment, as per a 4000-person survey conducted by Cashify, the “re-ecommerce marketplace” that sells and buys used smartphones and accessories. Mi is the most popular second-hand brand with 26 per cent, preferring its budget models. 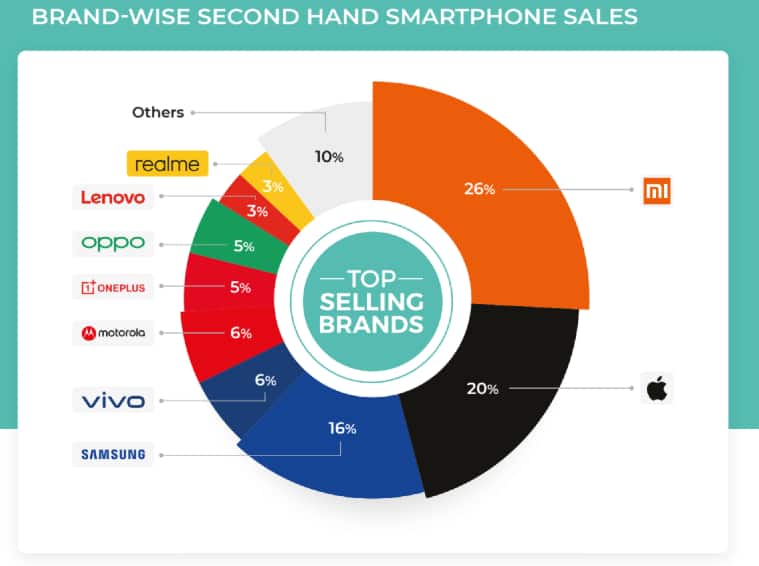 Apple is among the top brands in the second-hand smartphone market in India. (Image credit: Cashify)

“For Apple, it is the brand perception which drives the second-hand purchases of iPhones in India,” Nakul Kumar, COO & Co-Founder of Cashify tells Indianexpress.com while announcing the fifth annual “User Behaviour Whitepaper” for the pre-owned smartphone market. “A lot of Apple users sell their old phones since the value of its second-hand phones is very high. Trading or exchanging these phones makes more sense while buying new iPhones.”

The findings suggest the iPhone 7 was the top model in the buyback last year, followed by the iPhone 6 and iPhone 6s. In fact, out of the top 12 smartphones in the pre-owned market, Redmi and Apple brands dominated. Delhi, Mumbai, Bangalore, and Hyderabad as the top four cities for sales of pre-owned smartphones, according to the survey. While Apple has made significant gains in India’s smartphone market, the fact remains that iPhones are expensive for most Indian buyers. “Used devices make it affordable,” Kumar explains, adding that the increasing cost of iPhones has helped push up Apple’s share in the pre-owned market.

“The perception of owning a second-hand smartphone is changing,” Kumar said. “When we sell refurbished devices, we give a six-month warranty on that device. These things build a lot of trust in the consumer, plus we have 60 retail stores across India,” says Kumar, adding that Cashify sells around 100,000 phones a month. “We want to make a smartphone affordable for everybody.”

Kumar clarifies that Cashify is not in competition with the likes of Amazon and Flipkart and other retailers. He says the startup works with top smartphone players including Apple and has a relationship with every e-commerce firm and high-street retailer in India. “We don’t compete with them, we are part of the ecosystem. We help them run their exchange programmes in various ways,” he said.

“We sell to second-hand smartphone retailers who in the end sell to end consumers. Because we work in such a volume, the price is very supply-demand driven and not perception driven,” Kumar replies when asked why they offer lower prices on the exchange.

Kumar agrees the ongoing pandemic, which has forced millions of people to work from home, is helping second-hand smartphone sales in the country. A lot of people are buying used phones for kid’s education – and even the older generation is using smartphones for payments. “We’ve already seen a lot of demand and distribution here in terms of our business, we should be back to our pre lockdown numbers by this month,” he says.

The health benefits of coffee