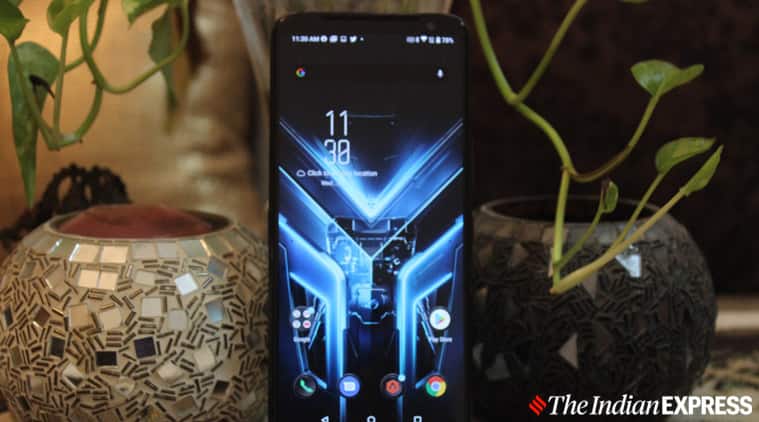 Asus’ ROG Phone 3 is a dedicated gaming smartphone with a lot of power inside. (Image credit: Anuj Bhatia/Indian Express)

Asus is among the few companies that truly believe in the concept of gaming-focused smartphones. Its ROG Phone and ROG Phone 2 did manage to make an impression, despite being mostly pitched at pro-level mobile gamers. The third-generation ROG Phone 3 sticks to the core formula: make a gaming-focused smartphone that not only has the best gaming hardware but also improves on the user experience with features like Air Triggers, two pressure-sensitive areas on the edge of the phone that act as shoulder buttons. While some say the market for such phones is limited right now, Asus is betting on the cloud gaming future, when services like Google Stadia and Microsoft Project xCloud have a mass appeal. Asus’ plan also includes the vision to create its own ecosystem of proprietary accessories that work with the ROG Phone 3, designed under its Republic of Gamers (ROG) brand.

I spent a few hours with the ROG Phone 3 to see what’s different—how it feels in the hands, what’s new in the display tech, and how the new features work. Here are my first impressions.

The overall look hasn’t changed much from last year’s ROG Phone 2. The device still has sharp angles, RGB lighting, and a massive copper plate as a heat sink on the back This time, though, the section where the copper heat sink is located can be seen through a rather unique translucent area.

The ROG Phone 3 is huge, just like the Galaxy S20 Ultra. Thankfully, the phone is easy to get used to, though I must say I have had issues in sliding the phone into my jeans pocket. 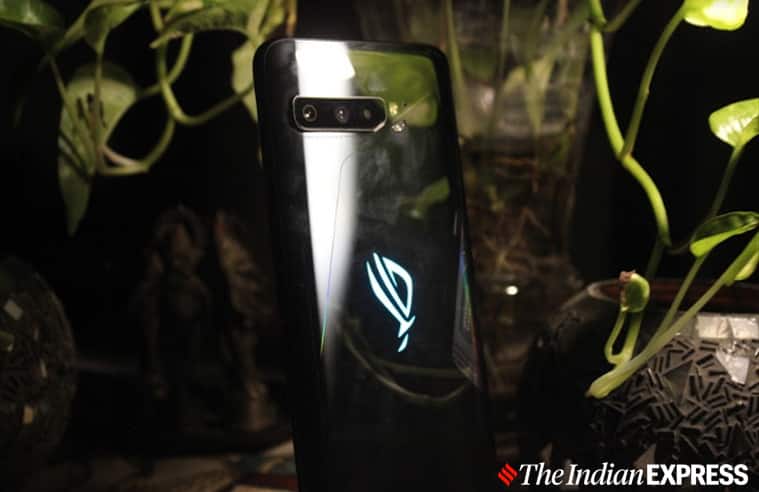 Gamers can activate the RGB lights around the back. (Image credit: Anuj Bhatia/Indian Express)

The built quality of the phone is great; it’s made of metal and glass. It is also thick and weighs considerably more than other phones on the market. The device is also slippery, though Asus provides a high-quality case in the box.

The ROG Phone 3 is designed in such a way that it looks like an out-and-out gaming phone. Flip the phone and you will notice the ROG logo that lights up. Also on the rear are triple facing cameras. The phone now includes much-improved third-generation “AirTriggers” on the top left and top right edges of the phone when held horizontally. These are simply L1 and R1 buttons similar to a regular console controller. A lot of popular games including PUBG support capacitive shoulder buttons. I will discuss how the new “AirTriggers” different from previous capacitive shoulder buttons on the ROG Phone 2 in my review. The ROG Phone 3 also boasts of a new motion sensor control that detects the shakes to simulate a tap on the screen. 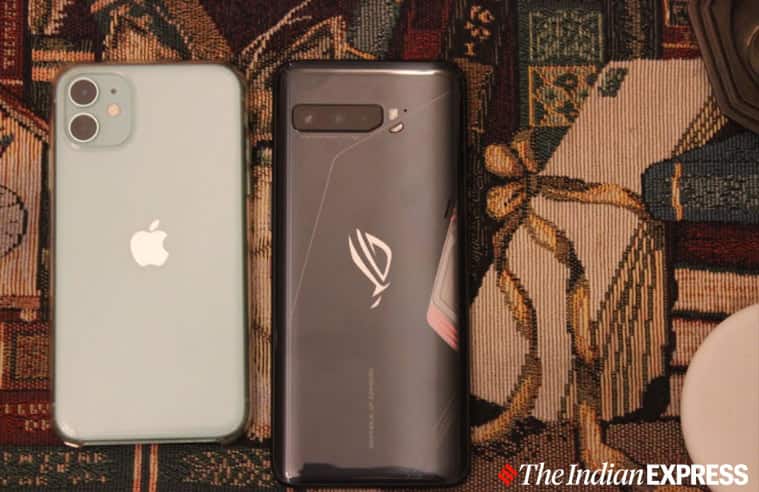 In terms of connectivity, there is a USB Type-C port on the bottom. The 3.5mm headphone jack has been removed from the device. The left-hand side-mounted dual USB-C ports can be used for a wide array of ROG accessories. The dual front-facing speakers have been upgraded, too.

The display on the ROG Phone 3 is jumbo-sized. You have a 6.59-inch AMOLED screen with 2340×1080 pixel resolution and HDR10 support. Based on my limited testing, the display appears to be bright with vivid colours and deep blacks. What makes this display unique, though, is its 144Hz refresh rate with a 1ms response time that also supports 270 Hz touch response. While the display supports a 144Hz refresh rate, Asus gives you the option to switch to 60Hz, 90Hz, 120Hz or 144Hz to conserve battery life. Or else, you can turn on the auto mode where the display automatically adjusts the refresh rate based on the tasks you are doing on a phone. 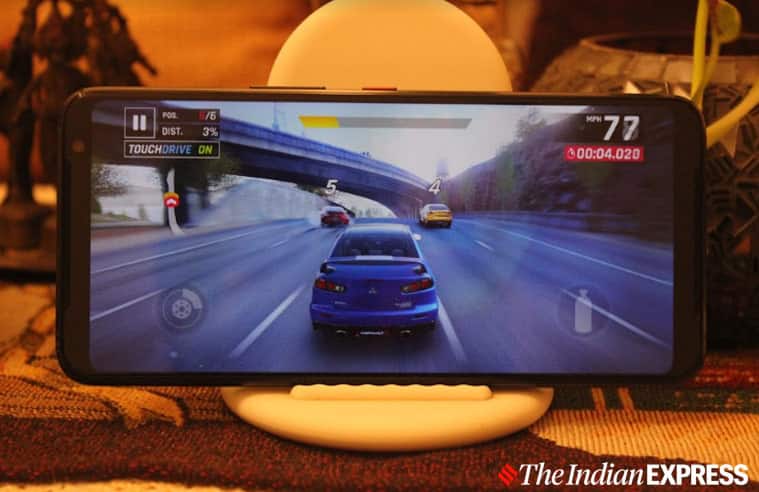 Asus ROG Phone 3 is the first smartphone to be powered by a Snapdragon 865 Plus processor. (Image credit: Anuj Bhatia/Indian Express)

For those who don’t know, the refresh rate counts the number of times the display refreshes every second. A 60Hz display refreshes 60 times per second and 144Hz is 144 times per second. 60Hz is the standard on most smartphones, a 144Hz refresh rate is something many pro-level gamers would want to see on their phones. There are many mobile games that now support high refresh rates, though I am not aware of any prominent mobile game that supports a 144Hz high refresh rate. Hopefully, games that support the 144Hz display start showing up on the Google Play Store too.

The ROG Phone 3 comes with Qualcomm’s recently announced Snapdragon 865 Plus processor, made using a 7-nanometer fabrication process and said to be the fastest CPU in an Android smartphone. The Snapdragon 865 Plus is an overclocked version of the Snapdragon 865 that can deliver up to 10 per cent improved performance. Based on my limited testing, I did not see any speed improvement compared to the Snapdragon 865-powered Mi 10. App switching was breezy and I was able to play Asphalt 9 and a few other games without any lag or stutter. My review unit has 8G RAM and 128GB storage but Asus is also selling the device with 12GB RAM and 256GB storage. 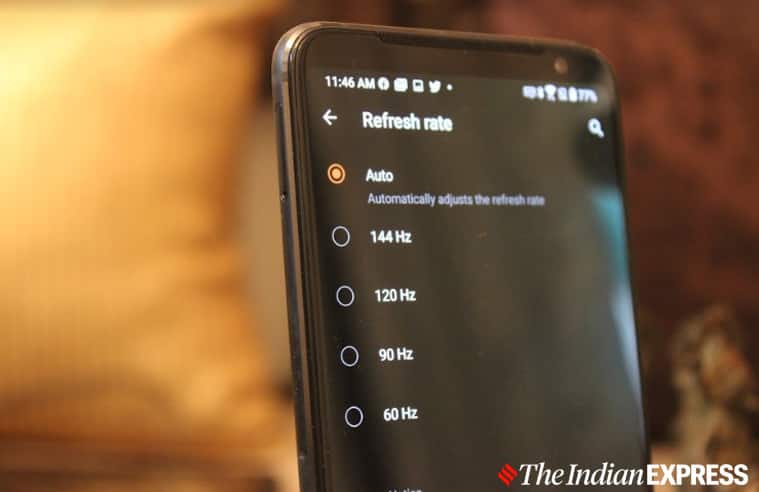 The ROG Phone 3 is obviously a gaming phone but the look and feel of the user interface (based on Android 10) can be changed. The company gives you the option to choose between the ROG UI or ZenUI. There aren’t many differences as such except the ZenUI is designed to appeal to gamers. As you might expect from a dedicated gaming phone, Asus has done some optimisations in the software. For instance, there is this X mode that lets you modify the performance of the phone, just like you do on a gaming pc. You can scale the performance of the device, change the fan speed, or tweak the settings of AirTriggers. And of course, no phone is complete without a camera. The ROG Phone 3 is armed with a triple camera setup consisting of a 64MP Sony IMX686 sensor, an ultra-wide 13MP camera and a 5MP macro camera. More on the camera in my detailed review of the phone. The front-facing camera is now 24MP, which is more than good enough.

Packed inside of the 5G-ready phone is a 6,000 mAh battery which should easily last two days on a single charge. Quick Charge 4.0 is supported and the phone is bundled with a 30w charger.