God of War will be available to play on Windows PC via Steam and the Epic Games Store, starting January 14, 2022. Ahead of its move to PC early next year, PlayStation has released a new trailer highlighting some of the features and improvements coming to ‘God of War.’ In addition, Sony has also released a system requirement sheet for the new version.

God of War on PC will run on native 4K resolutions at unlocked framerates, giving you a smooth gameplay experience. The graphics will also see major enhancements ranging from high-res shadows, improved screen-space reflections, and support for NVIDIA DLSS, giving owners of the RTX series cards sharp, upscaled visuals and a performance boost.

The game also has support for the NVIDIA Reflex low latency technology, allowing players to react quicker and hit better combos. Much like previous PlayStation ports, God of War comes with a 21:9 ultra-widescreen support as well, providing a quality cinematic experience as you journey through the Norse realms. The title comes with controller support for a wide range of gamepads and fully customisable keybindings for mouse and keyboard. 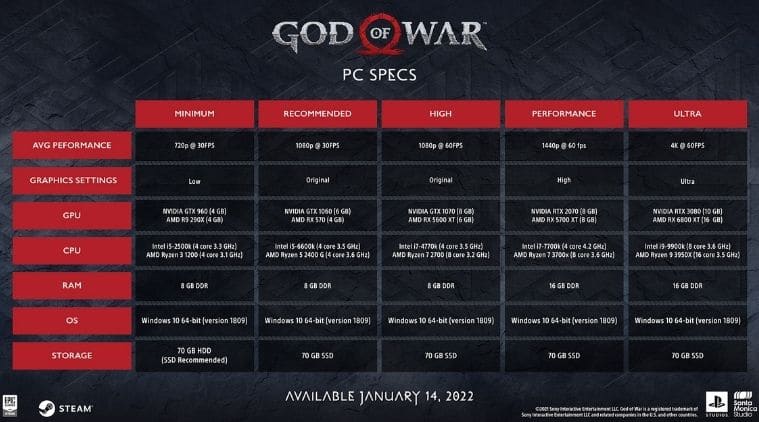 Additionally, Sony released a spec sheet for the PC variant, which details the required storage space as 70 GBs. To play God of War on the lowest settings (720p 30fps), you would require at least a second-gen Intel Core i5 processor paired with an NVIDIA GTX 980 or equivalent.

Meanwhile, to run it on the highest, ultra settings (4K 60fps), you would need an Intel i9-9900k alongside an RTX 3080 graphics card. Sony also recommends that you install the game on a solid-state drive, so the levels and textures load up really fast.

Following the events of God of War III, the 2018 title introduces us to a much-reserved version of Kratos, as he continues living in the Norse realm – ancient Scandinavia. After cremating the body of his wife, Faye, Kratos along with his son Atreus must set out on a journey to scatter her ashes from the highest peak of the nine realms.

God of War will be available to play on Windows PC via Steam and the Epic Games Store, starting January 14, 2022.