LG bets big on OLED TVs in India, to roll out rollable TV by year-end As Chinese players continue to flood the market with low-end smart TVs, South Korean major LG has shifted its focus to expensive organic light-emitting diode (OLED) TVs as it aims to target customers with deep pockets. On Wednesday , it launched a range of OLED TVs which priced between Rs 209,990 and Rs 10,99,990 in India.

“The market for OLED TVs is growing very fast in India,” Younchul Park, Director-Home Entertainment, LG Electronics India, told indianexpress.com in an interview on the sidelines of the launch of new OLED AI ThinQ TVs. In fact, the growth rate of OLED TVs has increased by 200 per cent year-over-year in India. In the premium smart TV market, LG competes with Samsung and Sony.

Park says the company didn’t expect the demand for OLED TVs to be so high in India. He cites “customer awareness” and understanding of OLED technology as the reason why users are investing in OLED TVs. LG manufactures all of its TVs, including OLED ones, in India.

Park understands the demography of users who will likely upgrade to an OLED TV, which is considered to be the most superior technology in the premium TV market with TVs over 55-inches. “We are expecting most of the premium customers to choose an OLED TV because it delivers perfect colour, perfect sound and built-in AI features,” he said. Profit margins are shrinking in the TV market with the entry of players like Xiaomi, TCL, Thompson and Kodak in the low-to-mid-range market. The entry of new players, who are active in the 32-inch and 55-inch screen sizes, has disrupted the smart TV market with their online-only models. Aggressive pricing has helped Xiaomi become the number one smart TV brand in India as of 2018, according to research firm IDC.

For Park, the key priority is to establish the fact that LG makes much better TVs than the competition. “Our advantage over others is much better picture quality and much better sound quality,” he said.

To win the market share from local and Chinese players, LG is adding AI-centric features and built-in Amazon Prime Video and Netflix that will help differentiate its WebOS-powered smart TVs from the competition. In comparison, Xiaomi’s Mi TVs lack popular apps like Netflix and Amazon Prime Video despite being running on Google’s Android TV operating system. LG’s cheapest smart TV is priced at Rs 24,990 and comes in the screen size of 32-inches. 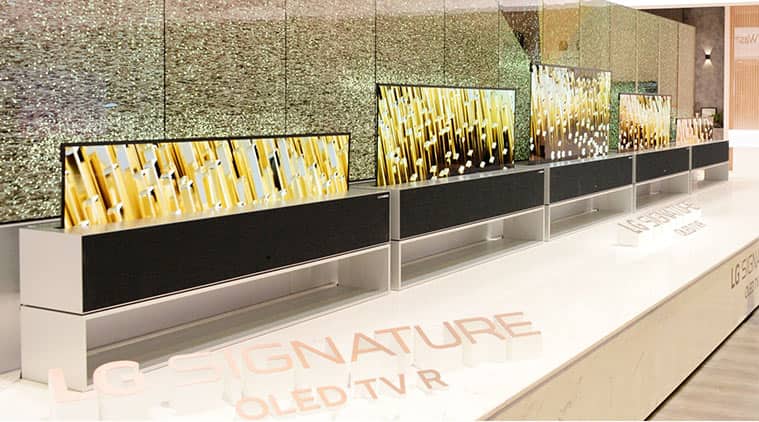 When not in use, the 65-inch OLED TV rolls down into a box that doubles as the soundbar. (Image credit: LG)

Park says LG will bring a lot of existing products to India and one of them is the rollable TV. At CES 2019, LG unveiled its first flexible OLED TV that promises to change the way we watch TV. When not in use, the 65-inch OLED TV rolls down into a box that doubles as the soundbar.

“We are planning to bring our rollable TV to India by the end of this year,” he said. The futuristic TV will be available in the US and other international markets including India, though LG is yet to set a price or release date.