Two executives - Yoel Roth and Robin Wheeler - who moderated a Twitter Spaces chat with Musk on Wednesday as he tried to assuage advertisers' concerns, have resigned. Earlier on Thursday, Twitter's Chief Security Officer Lea Kissner tweeted that she had quit. 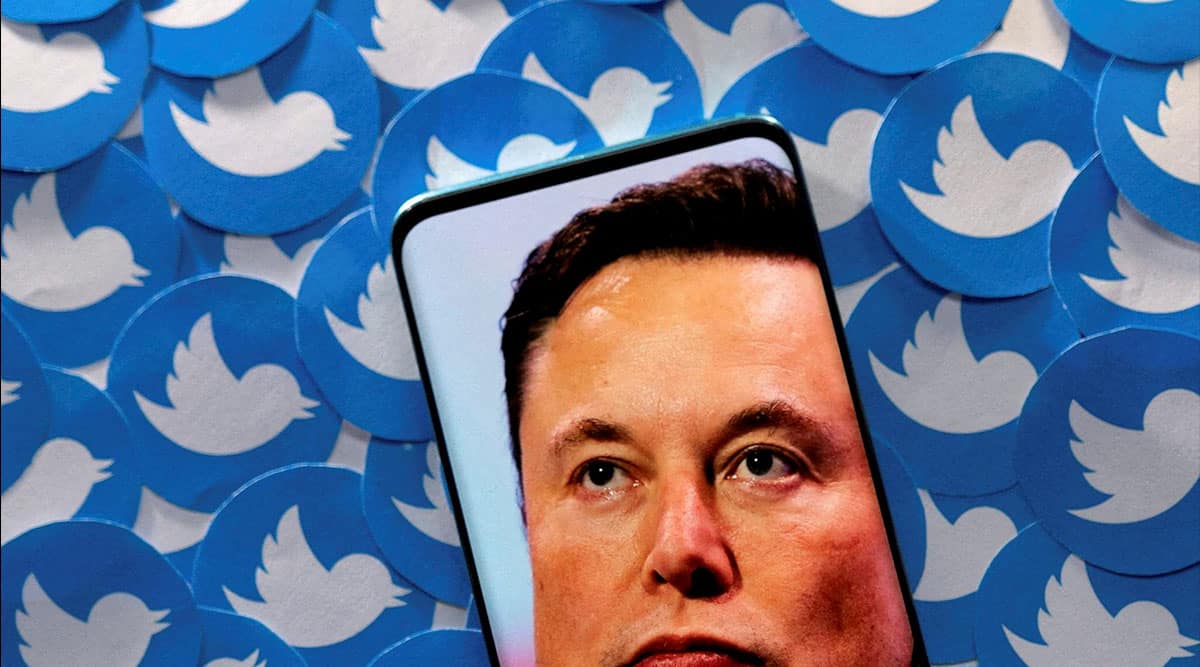 An image of Elon Musk is seen on a smartphone placed on printed Twitter logos in this picture illustration taken April 28, 2022. (Reuters)

Twitter’s new owner Elon Musk on Thursday raised the possibility of the social media platform going bankrupt, capping a chaotic day that included a warning from a US regulator and departures of senior executives viewed as future leaders.

The billionaire told Twitter employees on a call that that he could not rule out bankruptcy, Bloomberg News reported, two weeks after buying it for $44 billion – a deal that credit experts say has left Twitter’s finances in a precarious position.

Two executives – Yoel Roth and Robin Wheeler – who moderated a Twitter Spaces chat with Musk on Wednesday as he tried to assuage advertisers’ concerns, have resigned, one person close to the matter told Reuters.

Roth and Wheeler did not immediately respond to requests for comment. Bloomberg and tech site Platformer reported the exits first.

Chief Privacy Officer Damien Kieran and Chief Compliance Officer Marianne Fogarty also resigned, according to an internal message posted to Twitter’s Slack messaging system on Thursday by an attorney on its privacy team and seen by Reuters.

The US Federal Trade Commission said it was watching Twitter with “deep concern” after these three privacy and compliance officers quit. These resignations potentially put Twitter at risk of violating regulatory orders.

In his first meeting with all employees at Twitter on Thursday afternoon, Musk warned that the company may lose billions of dollars next year, the Information reported.
Twitter did not respond to requests for comment on a potential bankruptcy, the FTC warning, or the departures.

Wheeler was the face of Twitter for advertising after Musk took over. Roth, who was head of safety and integrity at Twitter, has said Twitter had reduced views of harmful content in search results by 95% compared to before Musk’s acquisition.

Musk, who ruthlessly moved to clean house after taking over Twitter for $44 billion on Oct. 27, has said the company was losing more than $4 million a day, largely because advertisers started fleeing once he took over.

Twitter with $13 billion in debt, on which it faces interest payments totaling close to $1.2 billion in the next 12 months. The payments exceed Twitter’s most recently disclosed cash flow, which amounted to $1.1 billion as of the end of June.

Musk announced plans to cut half its workforce last week, promised to stop fake accounts and is charging $8 a month for the Twitter Blue service that will include a blue check verification.

“We are tracking recent developments at Twitter with deep concern,” Douglas Farrar, the FTC’s director of public affairs, told Reuters.

“No CEO or company is above the law, and companies must follow our consent decrees. Our revised consent order gives us new tools to ensure compliance, and we are prepared to use them,” Farrar said.

In May, Twitter agreed to pay $150 million to settle allegations by the FTC it misused private information, like phone numbers, to target advertising to users after telling them the information was collected only for security reasons.

In the internal note cited above, the attorney mentioned hearing Twitter’s legal chief Alex Spiro say that Musk was willing to take a “huge amount of risk” with Twitter. “Elon puts rockets into space, he’s not afraid of the FTC,” the attorney quoted Spiro as saying.

Twitter’s buyout has sparked concerns that Musk, who has often waded into political debates, could face pressure from countries trying to control online speech.

It prompted U.S. President Joe Biden to say on Wednesday that Musk’s “cooperation and/or technical relationships with other countries is worthy of being looked at.”

Musk told advertisers on Wednesday, speaking on Twitter’s Spaces feature, that he aimed to turn the platform into a force for truth and stop fake accounts.
His assurances may not be enough.

Chipotle Mexican Grill said on Thursday it had pulled back its paid and owned content on Twitter “while we gain a better understanding on the direction of the platform under its new leadership.”

It joined other brands including General Motors that have paused advertising on Twitter since Musk took over, concerned that he will loosen content moderation rules.
Musk sent his first email to Twitter employees on Thursday, saying remote work would no longer be allowed and that they would be expected in office for at least 40 hours per week, according to Bloomberg News.

Interest rates rising, is it time to invest in debt instruments now?