Cook wants people to pay a premium — often to Apple — for a safer, more private version of the internet. It is a strategy that keeps Apple firmly in control. But Zuckerberg champions an “open” internet where services like Facebook are effectively free. In that scenario, advertisers foot the bill. 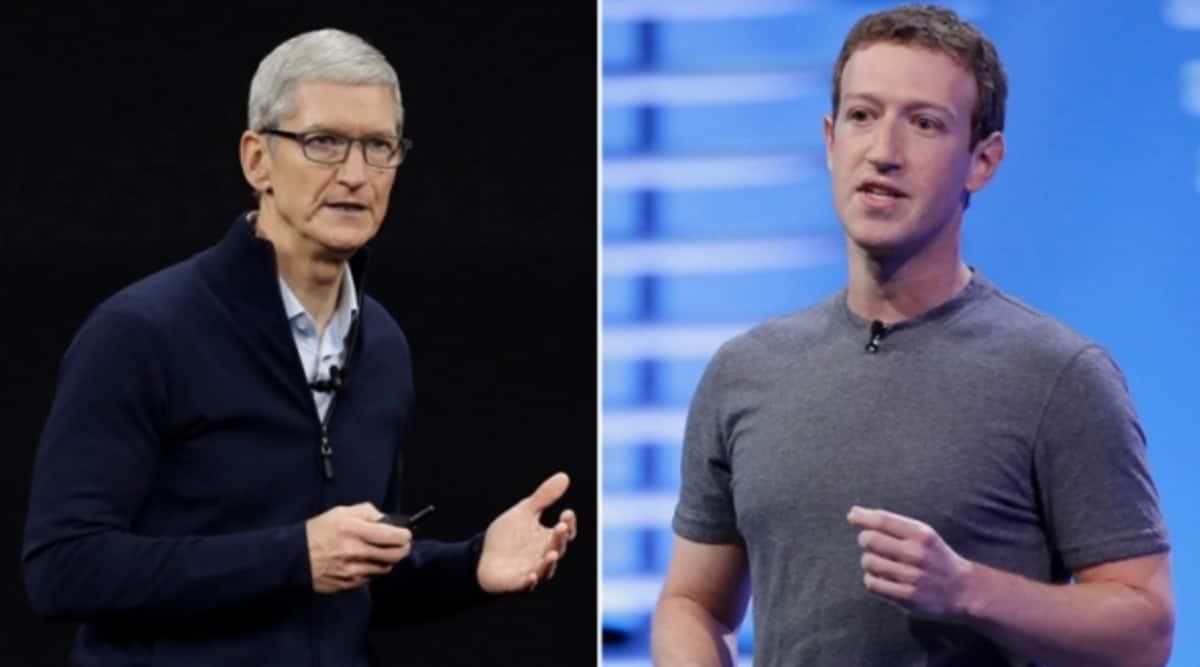 At a confab for tech and media moguls in Sun Valley, Idaho, in July 2019, Tim Cook of Apple and Mark Zuckerberg of Facebook sat down to repair their fraying relationship.

For years, the CEOS had met annually at the conference, which was held by the investment bank Allen & Co., to catch up. But this time, Facebook was grappling with a data privacy scandal. Zuckerberg had been blasted by lawmakers, regulators and executives — including Cook — for letting the information of more than 50 million Facebook users be harvested by a voter-profiling firm, Cambridge Analytica, without their consent.

At the meeting, Zuckerberg asked Cook how he would handle the fallout from the controversy, people with knowledge of the conversation said. Cook responded acidly that Facebook should delete any information that it had collected about people outside of its core apps.

Zuckerberg was stunned, said the people, who were not authorized to speak publicly. Facebook depends on data about its users to target them with online ads and to make money. By urging Facebook to stop gathering that information, Cook was in effect telling Zuckerberg that his business was untenable. He ignored Cook’s advice.

Two years later, Zuckerberg and Cook’s opposing positions have exploded into an all-out war. On Monday, Apple plans to release a new privacy feature that requires iPhone owners to explicitly choose whether to let apps like Facebook track them across other apps.

One of the secrets of digital advertising is that companies like Facebook follow people’s online habits as they click on other programs, like Spotify and Amazon, on smartphones. That data helps advertisers pinpoint users’ interests and better target finely tuned ads. Now, many people are expected to say no to that tracking, delivering a blow to online advertising — and Facebook’s $70 billion business.

At the center of the fight are the two CEOs. Their differences have long been evident. Cook, 60, is a polished executive who rose through Apple’s ranks by constructing efficient supply chains. Zuckerberg, 36, is a Harvard dropout who built a social-media empire with an anything-goes stance toward free speech.

Those contrasts have widened with their deeply divergent visions for the digital future. Cook wants people to pay a premium — often to Apple — for a safer, more private version of the internet. It is a strategy that keeps Apple firmly in control. But Zuckerberg champions an “open” internet where services like Facebook are effectively free. In that scenario, advertisers foot the bill.

The relationship between the CEOs has become increasingly chilly, people familiar with the men said. While Zuckerberg once took walks and dined with Steve Jobs, Apple’s late co-founder, he does not do so with Cook. Cook regularly met with Larry Page, Google’s co-founder, but he and Zuckerberg see each other infrequently at events like the Allen & Co. conference, these people said.

The executives have also jabbed at each other. In 2017, a Washington political firm funded by Facebook and other Apple rivals published anonymous articles criticizing Cook and created a false campaign to draft him as a presidential candidate, presumably to upend his relationship with former President Donald Trump. And when Cook was asked by MSNBC in 2018 how he would deal with Facebook’s privacy issues if he was in Zuckerberg’s shoes, he replied, “I wouldn’t be in this situation.”

Apple and Facebook declined to make Cook and Zuckerberg available for interviews and said the men have no personal animosity toward each other.

Regarding the new privacy feature, Apple said, “We simply believe users should have the choice over the data that is being collected about them and how it’s used.”

“Free, ad-supported services have been essential to the growth and vitality of the internet, but Apple is trying to rewrite the rules in a way that benefits them and holds back everyone else,” a spokeswoman said.

Cook and Zuckerberg first intersected more than a decade ago, when Cook was second in command at Apple and Facebook was a startup.

At the time, Apple saw Facebook as a hedge against Google, the search giant that had expanded into mobile phone software with Android, a former Apple executive said. Around 2010, Eddy Cue, who leads Apple’s digital services, sought out Zuckerberg for a potential software partnership, the former executive said.

In the ensuing meetings, Zuckerberg told Cue that Apple had to deliver a great deal for a partnership, or the social network would be happy to go it alone, this person said. Some Apple executives felt those interactions showed that Zuckerberg was arrogant, this person added.

Two other people said that the talks were cordial and that they were confused by the characterization of the meetings. The discussions eventually led to a software feature that let iPhone owners share their photos directly to Facebook.

But the friction had set the tone. The situation was complicated as Facebook and Apple also became mutually dependent. The iPhone was a key device for people to use Facebook’s mobile app. And Facebook’s apps — which later also included Instagram and the messaging service WhatsApp — have been some of the most downloaded programs from Apple’s App Store.

By 2014, Facebook executives had grown fearful of the leverage that Apple had over the distribution of its apps with iPhone customers. Those concerns were compounded when Apple at times delayed updates of Facebook’s apps through its App Store, said people familiar with the matter.

In February 2014, when Facebook’s board met to discuss Project Cobalt, which was a potential acquisition of an unidentified large social app, Apple’s power was top of mind. Sheryl Sandberg, Facebook’s chief operating officer, argued for the deal partly to protect the social network from Apple’s and Google’s control over smartphone software, according to the meeting’s minutes, which were released last year as part of a congressional investigation into tech companies.

Cook decided to distance Apple from Facebook, the people said. While Cook had raised privacy as an issue as early as 2015, he ramped that up in 2018. Apple also unveiled a new corporate motto: “Privacy is a fundamental human right.”

This was in line with Apple’s marketing pitch, which was that people should buy $1,000 iPhones to help protect themselves from the internet’s harms.

When asked in an interview that year on MSNBC about Cambridge Analytica, Cook called the situation “dire” and suggested “some well-crafted regulation is necessary” for Facebook.

Then, at its 2018 developer conference, Apple unveiled technology changes that struck at Facebook’s ad business. Those included a built-in screen-time tracker for iPhones that let users set time limits on certain apps, which affected companies like Facebook that need people to spend time in apps to show them more ads.

Apple also said that to protect people’s privacy, it would require companies to get permission from users of its Safari internet browser to track them across different websites. Facebook has used such “cookie” tracking technology to gather data, which enables it to charge advertisers more.

“It really spoke to the power of Apple controlling the operating system,” said Brian Wieser, president of business intelligence at GroupM, an advertising industry firm. “Facebook isn’t in control of its own destiny.”

At Facebook, Apple’s privacy moves were viewed as hypocritical, said three current and former Facebook employees. Apple has long had a lucrative arrangement with Google to plug Google’s data-hungry search engine into Apple products, for instance. Facebook executives also noted that Apple was entrenched in China, where the government surveils its citizens.

Privately, Zuckerberg told his lieutenants that Facebook “needed to inflict pain” upon Apple and Cook, said a person with knowledge of the discussions. The Wall Street Journal previously reported Zuckerberg’s comment.

Behind the scenes, that work had already begun. In 2017, Facebook had expanded its work with Definers Public Affairs, a Washington firm that specialized in opposition research against its clients’ political foes. Definers employees distributed research about Apple’s compromises in China to reporters, and a website affiliated with Definers published articles criticizing Cook, according to documents and former Definers employees.

Definers also began an “astroturfing” campaign to draft Cook as a 2020 presidential candidate, presumably to put him in Trump’s crosshairs, The New York Times reported in 2018. A website, “Draft Tim Cook 2020,” featured a lofty quote from the CEO and a model campaign platform for him. Data behind the website linked it to Definers.

(Definers’ work against Apple was also funded by Qualcomm, another Apple rival, according to a Definers employee. Facebook fired Definers after The Times reported on its activity.)

Apple and Facebook have also started competing in other areas, including messaging, mobile gaming and “mixed-reality” headsets, which are essentially eyeglasses that mix digital images into a person’s view of the world.

By the 2019 Sun Valley meeting, Zuckerberg’s and Cook’s relationship had reached a low. Then it got even worse.

At Apple’s virtual developer conference last June, Katie Skinner, a manager on the privacy team, announced that the company planned a new iPhone feature to require apps to get users’ consent to track them across different apps. She discussed it for just 20 seconds.

To Facebook, it was a declaration of war, three current and former employees said. If people were given the option to not be tracked, that could hurt Facebook’s ad business, the executives figured.

Over the next few months, Facebook and Apple sniped at each other over the feature in letters to privacy organizations and advertising coalitions. Then in December, Facebook took out full-page ads in The Times and other publications about the change. It declared Apple’s privacy feature would hurt small businesses’ ability to advertise and said it was “standing up to Apple.”

Facebook also met with advertising clients to warn them about Apple’s change, according to a copy of a December video presentation that was viewed by The Times.

“Apple made unilateral decisions without consulting the industry about a policy that will have far-reaching harm on businesses of all sizes,” a Facebook product director said in the presentation. “The impact of Apple’s changes makes it harder to grow. And for some, even survive.”

Apple delayed the feature so apps and advertisers could prepare, but Cook refused to change how it worked. And in a picture to show the new feature, Apple used an image of a familiar app: Facebook.

Zuckerberg has since shifted his tune about Apple’s move. With Wall Street nervous about the effect on Facebook’s business, he said in a March interview on the audio chat app Clubhouse that Apple’s feature could benefit the social network. If advertisers struggled to find customers across different apps, he said, they might gravitate more toward Facebook because of its already enormous troves of data.

“It’s possible that we may even be in a stronger position,” he said.

But Zuckerberg has also been blunt about Facebook’s feelings on Apple. “We increasingly see Apple as one of our biggest competitors,” he said in an earnings call this year.

Even on that point, Cook has disagreed.

“I’m not focused on Facebook,” he told The Times this month. “I think that we compete in some things. But no, if I’m asked who our biggest competitors are, they would not be listed.”

‘Only wish to get some update… any update about him’: Wife of abducted ONGC employee