‘Who is she, I don’t know her’: MC Mary Kom on Nikhat Zareen

Two days after Nikhat Zareen wrote to Sports Minister Kiren Rijiju demanding a trial bout against MC Mary Kom before India's squad for Tokyo Olympic qualifiers is decided, the Olympic medalist has said, "Who is Nikhat Zareen, I don't know her." 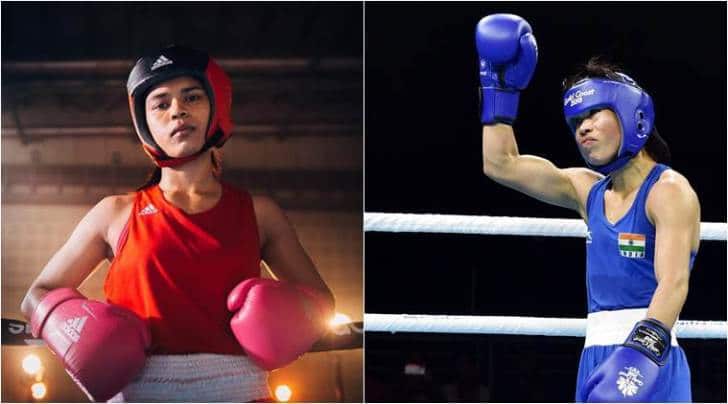 Mary Kom has found herself embroiled in a controversy, with Nikhat Zareen demanding a trial bout against her before the Indian squad for next year’s Olympic qualifiers is decided. (Source: Nikhat Zareen/Twitter, PTI)

Two days after boxer Nikhat Zareen wrote to Sports Minister Kiren Rijiju demanding a trial bout against MC Mary Kom before India’s squad for Tokyo Olympic qualifiers is decided, the Olympic medallist has hit back saying she’s shocked and the decision should be taken by the boxing federation.

“Who is Nikhat Zareen, I don’t know her,” Kom said in an interview to Republic TV.

“I am really shocked by all this. I have won eight World Championship medals, including six gold. Let the Boxing Federation of India decide whom they want. How can she cry like this? She cannot lobby to get a place in the Indian team. This is not done,” Kom said.

The Boxing Federation of India made changes to their previous decision, according to which players winning gold and silver medals at the World Championship would get direct entry to the Olympic qualifiers, in order to accommodate Mary Kom.

The body is reportedly set to send bronze medallists as well now. Mary Kom bagged a bronze at the recent World’s Women Boxing Championship in Russia.

The decision irked Asian Championships bronze medallist Zareen, who has not been able to get a chance to prove her mettle because she is in the same weight category as Kom.

This is not the first time Zareen is being deprived of a chance to qualify for an international event. The 23-year-old’s bout against Mary was cancelled before the World Championships as well.

Reacting to Bindra’s statement, Mary Kom said,” I know who is behind all this. They are from JSW and I would like to tell Abhinav Bindra that you don’t know anything about boxing and you please stay focused on your shooting. I have been doing boxing for over a decade now and for how long I will continue giving trials. Don’t my records and medals speak for me?”

The celebrated boxer had beaten Zareen in Indian Open earlier this year where the latter settled for a bronze medal.

Sports Minister Kiren Rijiju has said that the government would not interfere in selection matters and advised the BFI to be transparent in its resolution of the dispute between the two boxers.