Top 5 Sports News Headlines Today, September 24, 2019: Jasprit Bumrah to miss Tests against Proteas due to stress fracture in lower back

Top 5 Sports News Headlines Today, September 24, 2019:In a major setback to India, pace spearhead Jasprit Bumrah was on Tuesday ruled out of the upcoming Test series against South Africa due to stress fracture in his lower back. Fellow paceman Umesh Yadav replaced him in the Indian squad for the three-match series, beginning in Visakhapatnam from October 2.

“The injury was detected during a routine radiological screening. He will now undergo rehabilitation at NCA and will be monitored by the BCCI Medical Team. The All-India Senior Selection Committee has named Umesh Yadav as Bumrah’s replacement,” the BCCI said in a release. Yadav last played a Test for India in December 2018, during the tour of Australia. Bumrah had been rested from the recently-concluded Twenty20 series against South Africa, which ended in a 1-1 draw.

Australia’s Test tour of Bangladesh, which is part of the World Test Championship, has been postponed by four months to June-July next year, the Bangladesh Cricket Board (BCB) has announced. The two-match Test series was earlier scheduled to held in February next year. “According to the FTP (Future Tours Programme), we were supposed to host two Tests in February, but now the Test series will be played in June-July 2020,” Chairman of BCB’s Cricket Operations Akram Khan was quoted as saying by the ICC. Khan added that Bangladesh will also host Australia for a three-match T20 series scheduled to take place in October this year.

Led by MS Dhoni, Team India won the inaugural T20 World Cup 2007, beating arch-rivals Pakistan by five runs in a last-over thriller at Johannesberg.  Here’s a look at the squad which led India to a historic win in the shortest format of the game:

Since then, MS Dhoni led India to victory in the 2011 World Cup and to the top of Test rankings. The former Indian skipper retired from Test cricket in 2014, but still playing in the limited-overs format. The 38-year-old’s last international match was in the World Cup 2019 semi-final against New Zealand. Liverpool will be without injured forwards Sadio Mane and Xherdan Shaqiri for Wednesday’s third-round League Cup tie at MK Dons, the club’s assistant manager Pepijn Lijnders confirmed on Tuesday. Mane is yet to recover from a knock he received in Sunday’s 2-1 Premier League win at Chelsea, which resulted in a dead leg, while Shaqiri injured his calf during a training session. Amit Panghal: I cover points in later rounds, but the impression of the 1st round stays on

On Saturday, Amit Panghal got India its first silver from a men’s boxing World Championship. The 23-year-old, however, has been watching the 52kg final, that he lost to Uzbek Olympic champion Shakhobidin Zoirov, almost on loop. Panghal spoke with The Indian Express, sharing his thoughts on the final — specifically the 5-0 unanimous decision — whether there’s a need to change his strategy of leaving things for the later rounds, and the doping violation from 2012. Read full story here 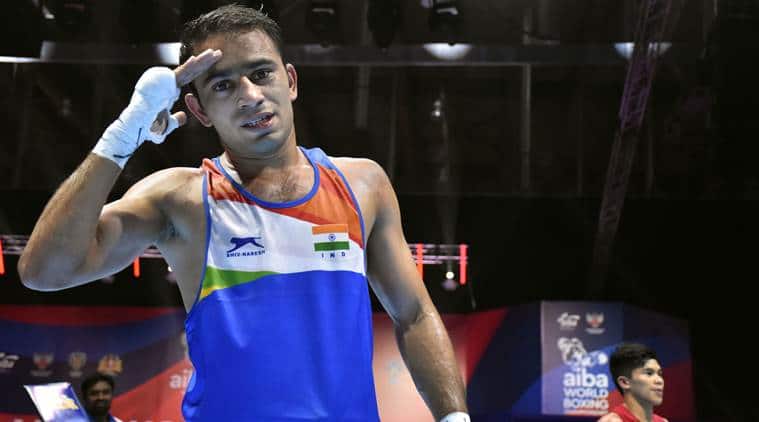 India returned from the World Championships with five medals (one silver, four bronze) and four quotas for the 2020 Olympics. Vinesh Phogat was the only Indian woman who punched her ticket to Tokyo at Nur Sultan. For that, she had to overcome a minefield of a draw. Mattsson was her first opponent, followed by a Japanese world champion and the reigning world number 1. Read full story here Deepak Chahar: Moving it at pace

The fourth delivery of Deepak Chahar’s second over in the Bangalore T20I cut Quinton de Kock into half. The left-handed South African was shaping up for the punch through the covers, and halfway through the delivery trail, the stroke seemed on, before the ball decked in devilishly after pitching marginally outside the off-stump, and beat the stunned batsman’s inside edge, evading the bails by a whisker. It’s the stuff of nightmares for left-handed batsmen — the ball that swings late into the pads. Read full story here Lionel Messi won his sixth FIFA player of the year award, while Megan Rapinoe won her first at a lavish ceremony at Milan’s iconic Teatro all Scala on Monday. Rapinoe was rewarded at the FIFA Best awards for leading the United States to the women’s World Cup title in July, as was Jill Ellis who won the women’s coach award. Read full story here Cannot keep a player like Rohit Sharma out of Test team: Zaheer Khan

Former Indian fast bowler Zaheer Khan feels the team management has made the right move by deciding to open with Rohit Sharma in the forthcoming three-Test series against South Africa. On the sidelines of the T10 event, scheduled to be held in Abu Dhabi, Zaheer, also spoke about why the team management shouldn’t be impatient when it comes to Rishabh Pant. Read full story here